Just before one of the greatest chases in One-Day International cricket was about to get under way at Hobart on Tuesday, there was power failure at the Bellerive Oval. As a result, Ravi Shastri, along with few other folks, was stuck in an elevator for 45 minutes. 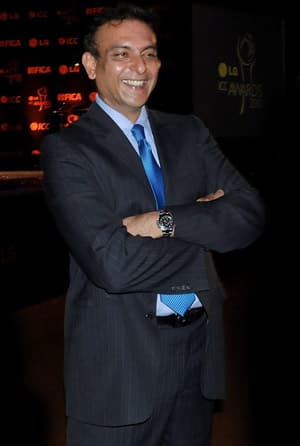 Just before one of the greatest chases in One-Day International cricket was about to get under way at Hobart on Tuesday, there was a power failure at the Bellerive Oval. As a result, Ravi Shastri, along with a few other folks, was stuck in an elevator for 45 minutes.

So what did Shastri do or say during those anxious moments?

Fortunately for cricket buffs, Lawrie Colliver, a cricket statistician with Fox Sports, who had the ‘honour’ and ‘privilege’ of being cloistered with Shastri in the elevator, took short hand notes of the great man’s utterances and share them with The Unreal Times:

(Just as Shastri enters the lift)

Lawrie Colliver: Too lazy to take the stairs, eh, Raavi?

Ravi Shastri: I’m fond of taking the aerial route, Lawrie! Which floor are you heading to?

(Suddenly, sparks fly from the button panel, and a loud grating noise is heard overhead, forcing Lawrie and the others to cover their ears and duck reflexively)

Ravi (completely unperturbed): The atmosphere in the elevator is electric, and the noise is deafening. We should be in for a cracker, Lawrie!

(The elevator comes to a grinding halt, and the lights go off, plunging the elevator into darkness. All the occupants look at each other, except for Shastri who stares straight ahead)

Shastri (in his trademark tone): Just get the feeling Lawrie, that something’s gone down the elevator’s wire.

Shastri: Not to worry, Lawrie. I’m a cool customer, with loads of experience.

(Shastri puts on his shades, adjusts his tie, stands on his toes, reaches for the roof of the lift and nonchalantly pushes out a square panel)

Colliver: What are you trying to do, Raavi?

Shastri I know where exactly the boundary is, Lawrie. I have a few tricks up my sleeve! I am gonna give myself some room, find the gap, pick my spot and go the distance!

Colliver (*facepalm*) : Are you sure, Raavi? Have you done this before?

Shastri: Oh, we do this all the time in India, Lawrie. Speaking of India, do you like Indian curry, Lawrie?

Colliver: For the love of God …

Shastri (puts his arm through the hole in the roof and gropes around in the dark and then suddenly raises his voice): He goes big! It’s in the air! Will he go all the way? No! He’s mistimed it! And IT IS TAKEN!

(Shastri steps back in, holding something that feels like a piece of cloth. He peers at it in the dark)

(Brings it before Colliver’s eyes)

Colliver (loses his cool and yells): Good heavens, Raavi! Stop showing me a discarded tie which someone threw down the elevator shaft!

Shastri (a little defensively): If I’ve got to flash, Lawrie, I will flash hard!!

(Colliver slumps in a corner with an utterly resigned look on his face. There is silence in the elevator for about a minute, after which Shastri does the first sensible thing all day; he presses the alarm button)

Shastri (speaking into a microphone on the panel): Ladies and Gentlemen, the news from the centre is that Lawrie and I are stuck in an elevator and we need help! We hope to see some live action shortly!

(Colliver looks up, a semblance of hope returning to his eyes)

Colliver Do you think we’ll be able to get out safe, Raavi?

Shastri: At this stage, all 4 results are possible, Lawrie.

(Colliver groans and faints. After about ten minutes, most of it spent in relative silence except for a solitary comment from Shastri on ‘when the powerplay would be taken’, the alarm speaker rings out)

Speaker: Hi guys, this is Mark from the elevator rescue team. We just want to let you know that we will be rescuing you in a few minutes. At this time, we request you to stay calm and not panic. Thank you for your co-operation.

(Lawrie stirs back to consciousness)

Colliver (mutters weakly): Thank you God. We are saved!

Shastri: What is the mood like, in the rescue team? What was going through your mind as you rushed to come to our rescue?

(Collliver utters a shrill scream, leaps to his feet and in a moment of utter insanity, attempts to climb the sides of the elevator using his fingernails, leaving deep scratch marks on the walls of the elevator. Fortunately, within a couple of minutes, the door of the elevator opens, and paramedics step in and carry the harried statistician on a stretcher. Shastri steps out of the elevator, adjusts his shades and stands straight facing his rescuers.)

Shastri: Ladies and Gentlemen, we’ve had a fabulous 55 minutes in the elevator, over 300 words were exchanged as two truly competitive guys went hard at each other, without giving as much as an inch, and it can only be said that in the end, the friendship between Lawrie and I is the real winner!”(Ashwin Kumar is an untrained musician, singer, writer/blogger, satirist, T Rajendar (pseudo)-fanatic, mimic, passionate about stopping female foeticide)