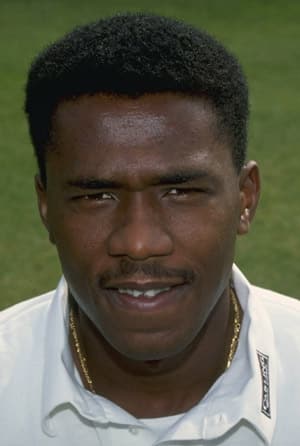 Ian Bishop, born October 24, 1967, was the last of the great fast bowlers produced by the Caribbean pace bowling assembly line, who combined into one of the greatest opening bowling attacks with Curtly Ambrose. Arunabha Sengupta looks back at the career of the six-foot five inch bowler whose playing days were repeatedly and severely cut short by multiple injuries.

He was yet another of those mean men of the Caribbean pace machinery who clutched the hearts of the best of batsmen with the cold hand of fear. He was the product of a system that had been almost perfected over the last two decades. He was a 6 foot 5 inch giant who ran in fast and could hurl them down at scorching pace.

Even before he made his Test debut he fractured the forearm of Krishnamachari Srikkanth with a snorter in an One Day International (ODI) at Georgetown in 1988-89.

Six and a half years later, he was still at it, breaking the jaw of the valiant Robin Smith in the Old Trafford Test of 1995.

With his great height, he was a terrifying proposition, as he ran in and pelted the batsmen with bolts of lightning. They were not just intimidatory bouncers. Ian Bishop had a razor sharp out-swinger delivered like curvilinear thunderbolts. However, the tragedy of his career was that he did not stop with inflicting injury and demolition on the opposition batsmen. He himself broke down, way too regularly and with increasing severity.

He pulverised the Indians to helpless surrender in 1988-89, especially with 6 for 87 on the fast Bridgetown wicket in just his second Test match.

Within a year, he graduated to partnering Curtly Ambrose with the new ball and skittled eight Englishmen in the deciding Test at Antigua.

He picked up wickets by the bushel even in the heart-breaking surfaces of Faisalabad and Lahore in 1990.

By then, his career had got off to a start to match the speed at which he bowled, with 53 wickets in 11 Tests at 20.58. He had left his mark in ODIs as well, vanquishing the Pakistanis at Perth with 5 for 27.

However, that was when in early 1991 stress fractures in the vertebrae were diagnosed and Bishop’s fast tracked career suffered the first of many derailments.

He underwent rehabilitation, worked zealously to change his action. He ran in open chested, chiselled the modification till it was had left no loophole. Even with his full frontal approach his out-swingers remained as effective. When he was not training, he prayed — with the earnest sincerity of a champion bowler who wanted nothing more than to run up to the wicket and hurl down his offerings yet again.

He did not come back until late 1992, with the tour to Australia. He was immediately back at the bowling mark, sharing the new ball with Ambrose, while Pat Patterson and Courtney Walsh lurked in the outfield, ready to take over when these two towering men were done with the initial destruction. With his modified run up he snared Mark Taylor within 20 minutes during his return at Brisbane. Once again, as the series went into a decider at Perth, Bishop provided the finishing touches. Ambrose picked up seven in the first innings and Bishop 6 for 40 in the second as West Indies won by an innings. He finished the series with 23 wickets at 20.86.

The following April, he started with 5 for 40 at Queen’s Park Oval against Pakistan, as West Indies recovered from a meagre first innings total of 127 to win by 204 runs. And then at Bridgetown, he broke down yet again. The troublesome back did not hold up and yet again Bishop left the cricket ground and made his way to the physiotherapist’s table.

At that stage of his career he had 83 wickets from 18 Tests at 20.45.It was clear that he was another in the long line of fast bowling greats produced by the islands. Writing in the present day, he comes across as the final product of that amazing assembly line. However, as he left for rehabilitation yet again, how many Tests his career would amount to remained uncertain. Ian Bishop with his great height was a terrifying proposition, as he ran in and pelted the batsmen with bolts of lightning © Getty Images

It took two years for him to return, and he finally made it to the team again for the tour to England in the summer of 1995. By then he was touching 28, and a major part of his career had already been lost.

Once again, the return was dramatic. That spring, West Indians had just been beaten in a series for the first time in one and a half decades by Australia. The English tour was a quest for regaining self-belief. And the remodelled action of this Trinidad bowler went a long way to achieve the same. He was not as express as in the older days, when his weight was borne by a younger back.By now the supremely fit Courtney Walsh was sharing the new ball with Ambrose. Bishop bowled first change and within the space of a dozen runs destroyed the England batting. Wisden dubbed him a “thinking man’s giant.”

England were cruising along at 142 for 2 late in the first afternoon at Headingley when Bishop trapped Graham Thorpe leg before. He then produced a peach of an out-swinger which touched the willow of the battling Michael Atherton and ended up in the gloves of Junior Murray. The hosts ended the day at 148 for 4. The following morning, Bishop dismissed Mark Ramprakash, Alec Stewart and Darren Gough within the space of one run. England limped to 199 and Bishop ended with 5 for 32 in his comeback Test.

The series proceeded along a see-saw route. England pulled one back at Lord’s. At Birmingham, West Indies went ahead again — Bishop capturing 3 for 18 in the first innings, and, handed the new ball in the second, 4 for 29. At Old Trafford England squared the series, but not before Bishop had broken the jaw of Robin Smith.

The series haul of 27 wickets at 24.07 was not bad for a man making yet another comeback after an injury that was widely considered to be career ending.

Bishop had a forgettable World Cup in the subcontinent, with just three wickets in his six outings. But, there was still some sting left in the tail end of his career. Wickets came regularly in Australia, 20 of them as West Indies lost the series 3-2. By now, he was back to carrying out his new-ball duties with Ambrose.

The final triumph was at Bridgetown against India, where his 4 for 22 in the second innings was instrumental in bundling the visitors for 81 as they chased a paltry 120 for a win. His scalps included the key wicket of Sachin Tendulkar, caught in the slips for 4.

This was, however, the end of Ian Bishop the great fast bowler. After the Barbados Test his figures read 147 wickets at 21.96 in 33 Tests with six five wicket hauls. The remaining ten Tests of his career was a sorry affair which yielded just 14 wickets at 48.57.

In retrospect Bishop’s career was perhaps a half-fulfilled promise, the remainder of the hopes and dreams falling away with his vulnerable back. He missed as many as 30 Tests during his career, otherwise for a man of his talent and speed the wickets column should have read closer to 300.

However, for a boy who grew up listening to Test match broadcasts from Australia, diligently jotting down each scored run, he did finish with a neat little collection of accomplishments.

Once he decided at the age of 14 that he was not exactly cut out to be an opening batsman, he started bowling more and more, faster and faster. He spent hours bowling in the Queen’s Park Savannah. He also read up about the fast bowlers of yore – the life and career of Keith Miller, Ray Lindwall, Frank Tyson and Malcolm Marshall. He watched the superb set of bowlers like Andy Roberts, Wayne Daniel and Colin Croft with plenty of admiration, but idolised Michael Holding.

When he looks back, he will find himself at par or ahead of many of these speed merchants in at least some aspects of his career.Especially in the list of the most successful new ball pairs, Bishop’s partnership with Ambrose has gone down as one of the best in history in terms of average. Joel Garner and Malcolm Marshall, and Wasim Akram and Waqar Younis are the only pairs to boast a better strike rate.

Bishop moved into the commentary box with the same poise and smoothness associated with his bowling action. In between assignments of commentary, he also pursued and completed his MBA degree.

His voice is heard from around the globe, and quite predictably the pain remains palpable as he talks about the fall of the mighty West Indians from the heights of glory to the lowly depths they plumb today.