Ian Botham turned up for the match hung over, and continued his drinking spree the next night as well.

September 6, 1984. Ian Botham turned up for the match hung over, and continued his drinking spree the next night as well. But in between he turned in heavy duty performances with bat and ball, destroying Gloucestershire in the process. Arunabha Sengupta recalls the day of drink-dipped genius.

In the prime of his life

1984 was the benefit year of the maverick all-rounder. And he was having a whale of a time.

Ian Botham had the world at his feet. That summer had not really been the best for England, far from it. The West Indian pace attack had blown them away 5-0 in England. However, the Somerset star had battled gamely, with three half-centuries and two five-wicket hauls. Especially at Lord’s, it was mainly his heroics of 30, 81 and 8 for 108 that had almost put England in a winning position before Gordon Greenidge had made a mockery of the 342-run target.

The champion all-rounder finished the Tests with 6 for 90 against Sri Lanka at Lord’s. That season he had crossed 4,000 runs in Test cricket and had gone past 300 wickets as well. He was one of the top all-rounders of the game, if not the best of them all.

Besides, he had been handed the captaincy of Somerset. The sequence of three Brians, which had started in 1969 with Brian Langford, had been passed over to Brian Close in 1972 and then in 1978 to Brian Rose, had been halted. Rose, the most successful captain in the history of the west county, had been relieved and Botham had been asked to take over the reins.

He did not really set Taunton and the other grounds on fire with his deeds with bat and ball during the season, but Botham did turn in some memorable performances.

Somerset was handicapped with the two great West Indian stars, Viv Richards and Joel Garner, busy doing duty for West Indies. When Botham was also away playing for England, the low-profile Vic Marks led the side. When the genius did turn out for the county side, results could be erratic.

He had his share of low scores and desultory bowling performances, peppered with some sterling efforts. Much of it, according to some teammates, was the result of his rather unusual approach to matches. During the home matches, it seemed Botham could seldom be found at home. Martin Crowe, the young Kiwi recruited to fill in for Viv Richards, shared accommodation with the England star and recalled, “While I would be beginning to wake to a new day, Ian would be getting a lift home via the milk truck doing its morning deliveries around 6 AM.”

Often it was in this condition that he turned up to lead the side, looking ghastly and smelling even worse. Sometimes he did not even bother to inspect the wicket.

Such was his state, when in September the team visited their northern neighbours Gloucestershire. Botham reached Bristol completely hung over, driven there by his trusted Personal Assistant Andy Withers. This sterling minder, Botham’s chauffer, friend and bodyguard, is perhaps an unsung hero of English cricket. It was his devoted and astute handling of Botham’s whims and requirements that kept the champion going through the mid-1980s. Later Withers would marry Sheena, the nanny of Botham’s children, and the great cricketer would be his best man during the ceremony.

That day, however, Botham collapsed to a horizontal position and asked Withers to fetch him two pork pies, one cup of black coffee and a large Alka Seltzer. Having dispatched his minder with the curious order, he snoozed till it was time for the toss.

According to eye-witnesses, Botham proceeded to ‘win the toss from a horizontal position’ without venturing into the ground. And having done so, being in no position to take the field, he chose to bat without even taking a look at the wicket. His job done, he went back to sleep.

Yes, they were high quality bowlers. David Lawrence was fast and would play for England later. John Shepherd was from Barbados and had played for West Indies. Approaching the end of his career, he had over 10,000 runs and 1,000 wickets under his belt. Gary Sainsbury was a useful left-arm medium pacer as well. And then there was the first change bowler, a gangling, laid-back Jamaican youngster called Courtney Walsh.

The openers, Nigel Felton and Peter Roebuck, were soon dismissed by Lawrence. As the skipper dozed in drunken slumber, Somerset were down to 11 for 2. It took the brilliance and impeccable form of Crowe to stem the rot. Nigel Popplewell did well to stick around with him and add 136 for the third wicket.

Meanwhile Lawrence, Shepherd, Walsh and Sainsbury kept asking questions, and it was the brilliant 108 by Crowe that eventually saw the side to a safe position. Then, a few minutes before tea, Walsh got the edge of the Kiwi youngster and the chirpy Jack Russell pouched it behind the wicket. At 223 for 4, Botham was just about waking up from his long slumber and shuffled in to bat.

His first act on reaching the wicket was to be caught in a muddle of confused calling that cost poor Jeremy Lloyd his wicket. But then he started belting the ball as only he could.

After tea he smashed the ball all around the wicket, taking particular glee in hammering Gloucestershire captain David Graveney’s left-arm spin. It was sensational hitting that amounted to 69 before he lost his stumps to Lawrence.

And once Somerset were bowled out for 390, he ran in with enthusiasm for a couple of overs before retiring to slip. By now, after a hard day’s work, he was quite eager for his first pint of the evening.

Gloucestershire finished the day on 28 for 1, and soon Botham was driving across the county border into Somerset for his evening refreshments.

The next morning he turned up once again in a disconcertingly similar state, plastered and tottering, ordering the same remedial recipe of pork pies, coffee and Alka Seltzer. But, this time he did not have the luxury to while his time snoozing while his batsmen held fort. He had to go on to the field straight away. The wicket was green and moist, and he was expected to bowl Somerset towards their first victory in the Championship in over two months.

Grudgingly, Botham took the field. However, he was in no state to bowl. He walked to the slips, and stood there, throwing the ball to young Crowe.

The stunned New Zealander protested. He could indeed bowl some gentle medium-pace, but he had been recruited to fill in for Richards, not Garner. Perhaps Botham was too muddled to realise the difference. He sent Crowe off to bowl and stood scowling in the slips.

According to Crowe, “I decided to play Ian’s game and proceeded to dish up the biggest load of rubbish ever bowled in Somerset colours.” It worked like a charm, a disgruntled Botham banished him to the slip cordon and marked out his run-up.

By now, however, Andy Stovold and Phil Bainbridge were in a steady, flowering partnership, and Botham’s first spell was perhaps too inebriated to make a difference. With time, the stand grew in proportions, and with Colin Dredge and Marks unable to break through, the score stood at over 150 for the loss of two wickets. By now, the fresh air and green surroundings had worked their effect, and Botham took the ball again.

In a brief and brilliant spell, Botham got Bainbridge caught in the in-field and flattened the stumps of Anthony Wright and Shepherd. With the top- and middle-orders thus dented, Marks got his off-spinners in a nagging length and first removed Stovold and then the tail. The Gloucestershire innings did not last much longer, capitulating for 234, having lost the last 8 wickets for 66.

Botham did not need any more sleep. As we will see later on, there were other things on his mind. The hosts were gruffly asked to follow on. Now, with the effects of alcohol wearying off, Botham took the new ball with Colin Dredge.

It did not take long. The ball swung late and away, and Paul Romaines nicked to the keeper. Dredge got young Bill Athey caught in the slips, and then Botham steamed in to knock over Bainbridge and Stovold, the tormenters of the first innings.

He accounted for his opposite number as well, getting a ball to thud into Graveney’s pads. With the specialist batsmen out of the way, Marks did short work of the tail. The match was over just before stumps, with the home side all out for 73. Botham bowled 26 overs in the first innings, 17 in the second, almost all of them on Day Two, capturing 7 for 123 in all, and getting what he desired.

What exactly did he desire?

According to his own confession, Botham wanted to get back to his mates in Taunton, to enjoy the evening, without the constraint of having to drive back to Bristol the next morning.

Well, that was Sir Ian Terence Botham in the hot days of his youth. 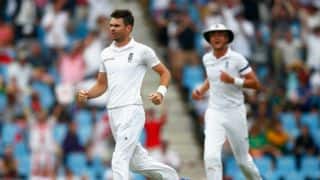