On July 28, 1977, Ian Terence Botham announced his arrival in Tests for England with a five-wicket haul. This feat was replicated a further 26 times in a career that spanned for over 15 years. Karthik Parimal highlights the days leading up to the stalwart’s debut. 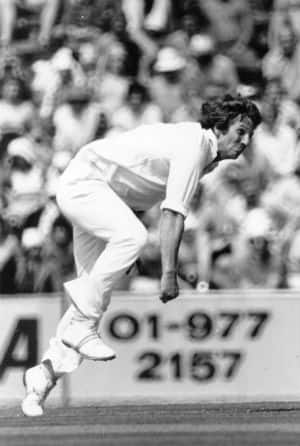 Ian Botham, England’s finest and one of the world’s best all-rounders © Getty Images

On July 28, 1977, Ian Terence Botham announced his arrival in Tests for England with a five-wicket haul. This feat was replicated a further 26 times in a career that spanned for over 15 years. Karthik Parimal highlights the days leading up to the stalwart’s debut.

It is a day English cricket will treasure for a long time to come, for Ian Botham, England’s greatest all-rounder, one of the finest in the world, graced the Test arena and left an indelible mark there. The ride was no doubt bumpy, but the journey incredible and his class seldom called into question. In fact, the road to his Test call-up wasn’t hassle free either, although it was certainly less controversial. But, like many an upcoming cricketer, the task to make the cut was uphill, the nights sleepless and the wait frustrating. Nevertheless, he overcame it all, fighting his way through and writing his name in the record books.

It was in 1976 that Botham’s First-Class career turned a corner. A maiden ten-wicket haul, four five-wicket spells, inclusive of a best of six scalps for 16 runs, was his claim to fame. Against the touring West Indians, he smashed 56 for Somerset facing a line-up that featured the likes of Andy Roberts. Against Sussex at Hove in the May of that year, he almost reached the three-figure mark, but he didn’t have to wait long for that coveted landmark, as, ‘due to the sparkle of Botham’ (as Wisden noted), Somerset triumphed over Nottinghamshire. His undefeated 167 in that match comprised of six sixes and 20 fours.

With that form, he shot into limelight and the media clamoured for his selection in the national side. He wasn’t picked for the Test team that summer, but donned the whites for the One-Day International (ODI) series against West Indies. However, the towering presence of Michael Holding and a more intense Andy Roberts overwhelmed him, and the much anticipated debut turned out to be a rather damp squib. Scoring 20 and 31 in his next two games, it was assumed that Botham had done enough to book his berth for the upcoming tour of India and the Centenary Test against Australia at Melbourne. Sadly, Tony Greig was the only voice on the selection committee who fought for his selection, but expectedly lost the battle.

When pressed for answers on Botham’s omission, selectors came up with statements such as “Give him another year, there’s plenty of time for him”. Obviously, the all-rounder felt otherwise, but rejection wasn’t a fresh concept to him. He’d seen plenty of that, even during his Under-15 days. Putting the disappointment behind him, he packed his bags and flew to Australia as one of the four players who was selected for the Whitbread Young Player Scholarship. It was here that he played gruelling cricket and grew as an all-rounder. In his later years, he often credited his success to this short stint in Australia as an intern. He believed it did him a more long-term good than joining the England tour in India.

When England visited Australia for the Centenary Test, Botham was given the job of looking after the English dressing room, a chance he relished for not only sampling the backstage atmosphere, but also since it gave him the opportunity to have a few beers with the players at close of play. That describes Botham’s attitude in a nutshell. It was during this Test that the infamous fight with Ian Chappell took place. Although different versions of the story still do the rounds, the fact that an uncapped player took on one of the giants of the games speaks volumes. He was fortunate enough to not cop bad press, since there weren’t any journalists on the scene. On further contemplation after settling down, he’d resolved to use a bat and a ball ‘to make the Aussies pay in the future’.

His scores in Australia and on return to England were noteworthy. During the same time Kerry Packer’s World Series Cricket was taking shape behind the scenes, with Grieg as the protagonist. When the news was made public, more than half of the players switched parties and this opened up the doors for the amateurs. Botham was now certain he’d receive a call-up and, surely enough, didn’t have to wait long.

Botham was on his way to the Taunton ground for a Sunday League game when on the car radio he heard his selection for the third Test of the Ashes series —his first — to be played at Trent Bridge, Nottingham. He found it hard to believe, but upon reaching the ground, players, supporters and the Somerset secretary congratulated him and that confirmed the news. Brian Close, the English stalwart, was in the dressing room and welcomed Botham with an advice along the following lines: “You’ve earned your chance, now don’t f*** it up.” The rest of the day passed in press interviews and celebrations.

On July 28, 1977, he arrived at Trent Bridge and was given his England kit before being introduced to the rest of the setup by skipper Mike Brearley. Donning the national shirt, flannels and boots filled Botham with pride, but it did little to calm his nerves. Sitting in a corner and having resolved to not run his mouth on the very first day, he hoped England would field first, for that would allow him to breathe easy. Australia won the toss and duly elected to bat. Botham got what he’d asked for, but he was also aware he’d be called to deliver with the ball soon. As the Australian openers — Rick McCosker and Ian Davis — trudged their way to a 79-run stand, the ball was tossed to Botham.

First of the many

Brearley had provided Botham with two slips and a gully at the start of his first over. The latter wanted a third slip, too, but was hesitant to ask his captain. His first delivery in Tests was pitched full and, with a bit of swing, took an edge from McCosker and the ball flew into the vacant third slip position. A disappointed Botham vowed to insist on setting the field he wanted henceforth, regardless of his rank in the team.  Thereafter, overwhelmed by the occasion, he exerted additional pressure upon himself and, in the process, sprayed the ball all over the pitch. Brearley duly took him off.

Derek Underwood and Bob Willis then struck to remove the openers. After the two had bowled a few overs in tandem, Botham was recalled with strict instructions from Brearley. “Do what you do best, pitch it up and give it a chance to swing and use the bouncer only as a very occasional surprise. If I think you’re using too many, I’ll take you off straight away,” Botham was told. The first delivery of his new spell was a loosener, a long-hop that Botham believed Greg Chappell would hammer to the fence 99 out of 100 times, but on this occasion, it took the inside-edge and crashed into the stumps. An astonished Chappell stood at his crease looking at the wickets in disbelief, but Botham was ecstatic, for his first Test scalp was that of a big fish.

With that, his anxiety disappeared and he ran in to bowl one of his fiercest spells. He had Doug Walters caught by Mike Hendrick, trapped Rod Marsh for a nought plumb in front of the stumps and soon dismissed Max Walker, yet again with Hendrick’s help. In just 34 deliveries, Botham had taken four wickets for 13 runs as Australia slipped to 155 for eight.

Kerry O’Keeffe, Jeff Thomson and Len Pascoe then offered some resistance, but Botham returned and had Thomson caught behind to bring down the curtains on Australia with their score on 243. He finished with figures of five for 74, his first five-wicket haul in his first outing on the big stage. England batted an amassed 364, Botham scoring 25 of them from No.8. England eventually won the Test by seven wickets and led the five-match series 2-0.

During the tea interval on the first day, the players were introduced to the Queen, another moment that made Botham’s first game a special one. “Taking five wickets and meeting the Queen in the year of her Silver Jubilee, all on the first day of my first Test match, was going to be a very difficult act to follow, though strangely the memory that has remained most vivid with me down the years was not of those great events but that nerve-jangling, unforgettable moment when I first set foot on the field, and England player at last,” recalls Botham in his autobiography Head On.

This feat of five-wicket hauls was replicated 26 times (excluding the four ten-wicket hauls) in a career that spanned over 15 years. If this wasn’t enough, he had 5200 Test runs (14 centuries, 22 fifties) to show for.

James Anderson: An account of his wizardry in recent times