Former Australia captain Ian Chappell concluded that the Indian great should contemplate his whole career. However, history would tell us that Chappell’s opinion on Tendulkar’s fate is ludicrous, much like Kapil Dev’s recent comments. 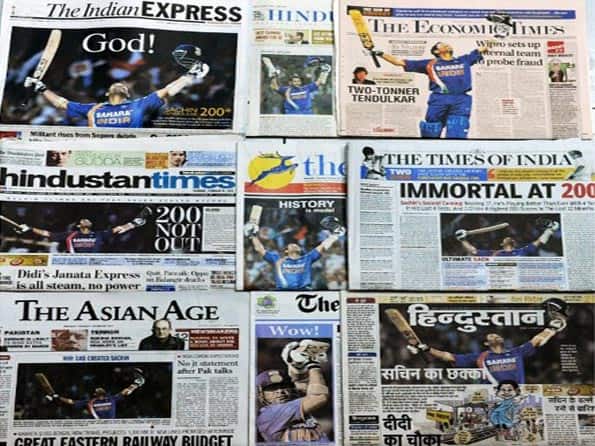 Front pages of India’s national newspapers on February 25, 2010 hail Sachin Tendulkar’s record- breaking double century in the second One-Day International (ODI) against South Africa in Gwalior a day earlier. This knock was among the many epic innings he played after the likes of Ian and Greg Chappell, John Buchanan among other notable men in international cricket had written off the maestro © AFP

As the 100th international hundred continued to evade the great Sachin Tendulkar, ex-cricketers indulged themselves into a debate over his future. While a few suggested that he should hang his boots from the One-Day International (ODI) arena, former Australia captain Ian Chappell concluded that the Indian great should contemplate his whole career. However, history would tell us that Chappell’s opinion on Tendulkar’s fate is ludicrous, much like Kapil Dev’s recent comments.

The ICC Cricket World Cup 2007 was a dark period for Indian cricket – one they would like to forget for good. In the aftermath of India’s disastrous performance and premature exit, a lot of the focus was on the then coach Greg Chappell and his controversial tenure at the helm. It was then that Greg’s brother Ian suggested that it was time for Tendulkar “to have a good long look into the mirror and decide what he’s trying to achieve in the game.”

Furthermore, the Australian added that “at the moment he looks like a player trying to eke out a career; build on a glittering array of statistics. If he really is playing for that reason and not to help win as many matches as he can for India, then he is wasting his time and should retire immediately.”

Very soon, he was made to eat his words as the Little Master made a remarkable recovery that saw him scale previously untouched heights and explore new areas of success.

If the injuries had taken a toll on his body in the years leading up to that disastrous campaign, then Tendulkar looked a rejuvenated player in the immediate aftermath as he set off on a mission to put things right and realise his dream of lifting the World Cup. The stats reflect his renaissance as it ended a tough phase and heralded a prolific era. Here are his numbers since the end of the 2007 World Cup:

In this period, Tendulkar has masterminded numerous team and personal milestones. On the team front, he has played pivotal roles in them winning the 2011 World Cup, 2008 Commonwealth Bank series and bagging the No 1 ranking in Tests, to name a few. Personally, he has continued to amaze the world with feats such as the 50th Test hundred, an ODI double hundred etc. A whopping 23 hundreds (Tests and ODIs combined) have come off his bat since Chappell’s famous evaluation. Keeping all this in perspective, it is astonishing to think that the other Greg Chappell wanted to ease him out of the team during his time as India’s coach.

Fast forward to the present, Ian Chappell has yet again ventured into dangerous territory. He again talks about a hypothetical “mirror”, the “right reasons to play” and pins the blame on the impending 100th hundred for burdening the Indian team. It is really brave of the senior most of the Chappell brothers to do so, especially when he has fallen flat on his face indulging in a similar exercise against the same Tendulkar in the not-so-distant past. Clearly he hasn’t learnt from the past. Ian Chappell would do well to remember the genius of Tendulkar has made finger-pointing cricket pundits like him eat crow.

During India’s tour of Pakistan in 2006, Moin Khan, the former Pakistani wicket-keeper, had said that it was “the beginning of the end” for Tendulkar after he failed to score runs in one of the Test matches. This was a horrific time for Tendulkar as the painful tennis elbow had a negative impact on his scoring runs.

“Endulkar” proclaimed an infamous headline in a national newspaper, suggesting it was the end of Tendulkar the batsman.

Tendulkar’s response? Runs flowed in torrents in the one-day series that followed as he notched up a century at Peshawar and a brilliant 95 on seaming track at Lahore.

The 2008 CB series finals would be remembered for Tendulkar’s sterling show that took India to a famous triumph. However, it wasn’t just India’s victory that made it spectacular. Prior to the finals, Tendulkar’s own form was iffy, pushing Sanjay Manjrekar to say, “With Tendulkar, it’s like the elephant in the room that no one wants to talk about.” Manjrekar’s view was founded on Tendulkar’s failures in run-chases over a period of time. Within days, Tendulkar smashed an unbeaten hundred in the first of the two final to take India through to a comfortable victory.

John Buchanan, the former Australia coach wrote in his book, The Future of Cricket: The Rise of Twenty20, that “T20 game requires not only finesse and skills, but also the power and domination, an ability to take the bowlers on while being creative. You have to be inventive and fearless. And I don’t see those qualities as part of Sachin’s makeup at this stage of his career. Sachin Tendulkar is still a great player but not in this arena of T20.”

A few months down the line, Tendulkar took the Mumbai Indians to the final of the Indian Premier League (IPL) 2010 with performances that defied the convention of T20 being a format for the youth.

Chappell could have been careful and more prudent in his choice of words and opinion this time around, but that was not to be. A stern riposte Tendulkar may be well on its way. In contrast to the 2007 situation, Tendulkar continues to look good and isn’t struggling. Champions have a way of asserting themselves at the right time.

Watch out for Sachin Tendulkar’s response – with the bat, of course!

(Nishad Pai Vaidya, a 21-year-old law student, is a club and college-level cricketer. His teachers always complain, “He knows the stats and facts of cricket more than the subjects we teach him)