It is almost as if fate mysteriously conspires to setup India-Sri Lanka contests. While the two teams have faced each other innumerable times in bilateral and tri-nation tournaments in the last few years, they invariably clash at the big events as well. An Australian fight-back in the last league game of the ICC Champions Trophy 2013 ensured that Sri Lanka finished second in Group A — a result that setup a semi-final encounter against India on June 20 in Cardiff. 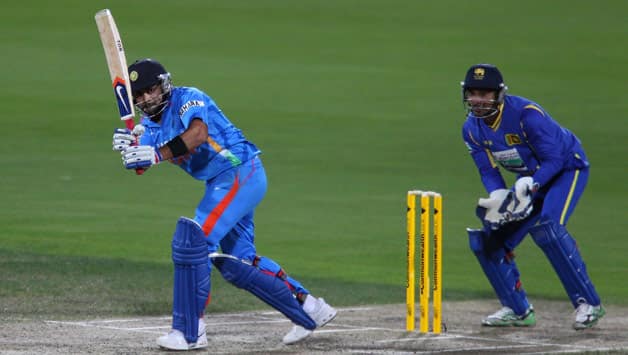 It is almost as if fate mysteriously conspires to setup India-Sri Lanka contests. While the two teams have faced each other innumerable times in bilateral and tri-nation tournaments in the last few years, they invariably clash at the big events as well. An Australian fight-back in the last league game of the ICC Champions Trophy 2013 ensured that Sri Lanka finished second in Group A — a result that set up a semi-final encounter against India on June 20 in Cardiff.

India and Sri Lanka are two fantastic One-Day International (ODI) outfits. India have a young side that has bashed preconceived notions and are expressing themselves in the middle. On the other hand, Sri Lanka have a unique blend of youth and experience that is eying a new era. However, the surprise element of the contests between the two sides is lost and the levels of excitement would be tempered as the semi-final approaches. There clearly has been an overkill of India-Sri Lanka cricket.

Since the end of the 2007 ICC World Cup, India and Sri Lanka have faced each other 44 times. India have been the dominant side — winning 26 of those matches. All these encounters have been spread across four bilateral series, six tri-nation tournaments, three Asia Cups and a World Cup. While the clashes in tourneys such as the World Cup and the Asia Cup are unavoidable, the boards of both countries could have avoided the meaningless bilateral series and a few unnecessary tri-nation events.

To get a broader understanding, one must look at these events chronologically (excluding the multi-nation tournaments). India played Sri Lanka in the Commonwealth Bank series Down Under in early 2008. The same year, they toured the Emerald Isle and played five ODIs. Early in 2009, India obliged again by visiting Sri Lanka for another five-match affair. In September 2009, they were involved in a tri-series with New Zealand and towards the end of that year, Sri Lanka visited India.

Having played each other throughout 2009, one would have felt that the two teams would have taken a break from each other. Wishful thinking? In 2010, they played each other in three tri-series — in Bangladesh, Zimbabwe and Sri Lanka. By these standards, the frequency of their match-ups reduced and they only came across each other for a full series in 2012 for the Commonwealth Bank tri-series Down Under, followed by another five games in Sri Lanka.

Such overkill beats the very purpose of the ICC’s Future Tours Programme (FTP). The basic principle underlying that is that teams should face each other at home and away for optimum number of games maintaining a balance between all sides. It almost looks as if that India and Sri Lanka find no one but each other to play. Through all that, an Indian Premier League (IPL) angle has also emerged.

The West Indies were supposed to host Sri Lanka for Tests, ODIs and T20Is in April this year according to the FTP. However, since players from both sides are involved in the IPL, the boards decided to do away with that. Instead, they scheduled a tri-series in June, the third team being — India. So, the two sub-continental giants would move from the cloudy backdrop of England to the sunny setting in the Caribbean. This is yet another example of an avoidable face-off.

Keeping the facts and statistics aside and moving to the field of play, there are no secrets between the two sides. Both know each other’s strengths and weaknesses in and out. Sri Lanka’s major players also hone their skills at the IPL alongside the Indian stars. That too diminishes the aura of such games as there can be a predictable pattern to them. They would know how to react to each others’ game plans and the suspense wears out.

Poor scheduling and administrative greed have resulted in such a scenario. Due to the constant encounters, games like the upcoming Champions Trophy 2013 semi-final lose their sheen and excitement. The boredom is inevitable and it wouldn’t be surprising if some of the players share the same opinion.