Two contrasting wins in the warm-up matches of the ICC Champions Trophy 2013 has left Indian skipper MS Dhoni with a selection headache ahead of the tournament opener against South Africa at Cardiff on Thursday. 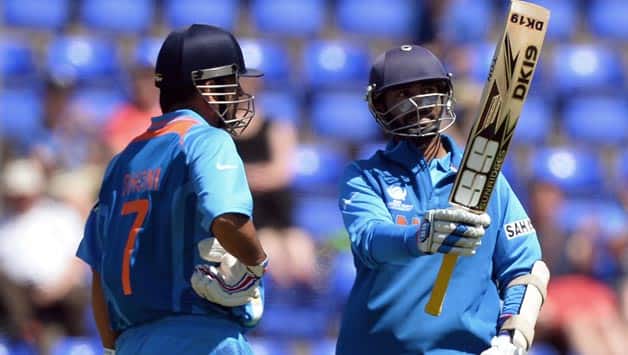 Two contrasting wins in the warm-up matches of the ICC Champions Trophy 2013 has left Indian skipper MS Dhoni with a selection headache ahead of the tournament opener against South Africa at Cardiff on Thursday.

They chased down and defended scores in excess of 300 in a span of two days, painting an inch-perfect all-round picture of the team’s performance. However, like always, there is more than what meets the eye.
The top-order conundrum

The new pair of openers — Shikhar Dhawan and Murali Vijay — failed to utilise the warm-up games as a chance to get their eye in. The middle-order too, barring a couple of names, did not prove their ability to consolidate in a steep chase or help rescue the side from total wreckage.

The only constant in the last two games has been Dinesh Karthik. With two centuries in as many games, he has probably done enough to find himself in the playing XI in the first few matches. After Karthik’s unbeaten knock of 146 against Australia on Wednesday, Dhoni had this to say:

“I think he has earned his place in the side and we’ll just have to see who misses out when we play against South Africa. I’d like him to play at the top of the order but we’ll see,” Dhoni said after the match which India won by 243 runs.

If Dhoni sticks to his word, which he does more often than not, one could see Karthik rightfully pushed up the order. Although Karthik has opened the innings in One-Day Internationals (ODIs) before, the No 4 spot will be most ideal. With Virat Kohli coming in at No 3 and Karthik playing at four, the openers can play without too much pressure on them.

The curious case of Rohit Sharma

The ‘talent’ of this young lad has been unquestionable for years now, but will he ever be able to step up? Will it be now or never for the Mumbaikar? Or have we passed that stage as well? Nobody except Dhoni will be able to answer these questions.

In a recent interview, Dhoni had said that the new ODI rules will force him to play five bowlers, which means one of his top-order batsmen will have to miss out. At the moment it could be a tossup between Vijay and Sharma to take the openers slot. One can expect Vijay to get at least a couple of games at the start as he was flown to England as a specialist opener ahead of the experienced likes of Virender Sehwag and Gautam Gambhir. Sharma’s failure to perform in both the warm-up games has further put his chances of playing against South Africa in jeopardy. The stage was set for him to join forces with Karthik and rescue India against Australia but he was extremely scratchy and fell for just 10 runs. He might have to wait for a while to get a chance in this tournament. With the top-four batsmen set, Suresh Raina and Dhoni could fill the last two spots of the six batsmen in the side.

The dry surface at Cardiff gave pacer Umesh Yadav a chance to generate a few extra yards of pace and bamboozle the Australian batsmen. He finished with figures of five for 18 in five overs as Australia were bowled out for 65. His extra pace troubled the Australian top-order and three out of his five victims were bowled. The recently wed youngster from Nagpur will be expected to lead the Indian bowling attack after a more experienced Ishant Sharma continued to maintain that he wasn’t the leader of the pack. However, that will not deny the tall man a spot in the XI. He did well to complement Umesh and picked up three wickets in the match against Australia and is most likely to play the game against South Africa.

Among the spinners, Ravichandran Ashwin will play as the lone specialist spinner. Amit Mishra, who performed well in the recently concluded Indian Premier League (IPL), could miss out as Dhoni will entrust all-rounder Ravindra Jadeja to give him his full quota of 10 overs.

The young and exciting Bhuvneshwar Kumar, who managed to swing the ball both ways on docile Indian tracks, could nudge Irfan Pathan for the final spot in the game against South Africa.

He did not have the best start against Sri Lanka but gave away just 18 runs in eight overs against Australia. Dhoni is more likely to persist with the youngster.

To sum up, it is likely that the openers will keep their spots inspite of an ordinary start, Karthik will be pushed to number four after twin centuries and Irfan will miss out to Bhuvneshwar, unless Dhoni sees sense elsewhere.