Did one ever imagine that an Indian side would the best fielding unit at a world event? That the youthful Indian team has eclipsed the likes of Australia, South Africa and New Zealand with their fielding skills has baffled their usual critics. Captain Mahendra Singh Dhoni beamed with pride as he proclaimed his young army’s superiority on the park. Is it only the exuberance of youth that is working, or there is more to it? Did one ever imagine that an Indian side would the best fielding unit at a world event? That the youthful Indian team has eclipsed the likes of Australia, South Africa and New Zealand with their fielding skills has baffled their usual critics. Captain Mahendra Singh Dhoni beamed with pride as he proclaimed his young army’s superiority on the park. Is it only the exuberance of youth that is working, or there is more to it?

Fielding wasn’t exactly a core area of focus in Indian cricket. It was merely incidental and the skills with the bat or the ball were the sole criteria for getting into the team. This was a neglected department and budding players would at times treat it as a punishment — a necessary evil even. It was due to that mindset that India were falling behind the world as One-Day International (ODI) cricket raised the standards of fielding.

Over the years, India have had brilliant fielders, but few and far in between. The first time they had a decent unit was in the early-2000s when the young Yuvraj Singh and Mohammad Kaif burst on to the scene. The sight of them diving around, leaping to save the ball or take an impossible catch inspired the team on the field of play. There was a sense of confidence within them, forming an almost impenetrable ring on the off-side.

Yuvraj and Kaif were the two brilliant fielders who set high standards. Some of the others around them were stable, but not spectacular. As a unit, at their best, they were average and one could see that there was some distance to go. Then the worst possible thing happened to Indian fielding. Kaif lost his spot in the Indian team and injuries dogged Yuvraj’s fitness as he lost his trademark zing in the process.

The first time India saw a proper fielding unit was during the 2007 ICC World T20 — a tournament which witnessed Dhoni’s young turks march towards an improbable victory. But, that did not spill into the ODI arena as India still had a few slow movers. Even during the 2011 ICC World Cup, India raised their standards as the tournament progressed. There were a few agile customers on the field, but the others were fuelled by inspiration and the desire to do the ultimate.

The ICC Champions Trophy 2013 is a major turning point for the Indian ODI side in more than one way. The fresh pair of openers have given ample evidence of their talent and technique. Ravindra Jadeja is stamping his authority as an all-rounder. However, this could be a defining moment for Indian fielding as that department has certainly raised the bar. The youngsters to come in the future could make it into the team by virtue of their ability to protect the field.

During the 2012 ICC World T20, a commentator had said that India only look a good fielding side when the ball follows Rohit Sharma, Virat Kohli and Suresh Raina. Today, after you add Dinesh Karthik, Shikhar Dhawan and Jadeja to that list — you have a brilliant unit. Umesh Yadav and Bhuvneshwar Kumar are decent in the deep. Ravichandran Ashwin may not be very agile, but is stable in the slips. Ishant Sharma can get better as he is fit and only the skill-set needs polishing.

What has led to this complete shift? Has the Indian Premier League (IPL) brought about this change? Yes, the league has certainly helped raise standards in India, but that alone isn’t the reason. If one looks at this squad, one would see that majority of them have been around for a few years. All of them weren’t together as a group until this tournament and that is why one can sense a radical change. These players have always been electric fielders, but this is the first time they have combined as a unit.

Poor fielding has been an unshakable anchor for the Indian ship in the past. It was something that held them back and kept them rooted to a spot even as the other departments fought hard to surge ahead. Now, they have unchained themselves with consummate ease and that augurs well for the future. As this team would aim to raise the bar with each passing tournament, the usual culprit wouldn’t be around to hinder them. 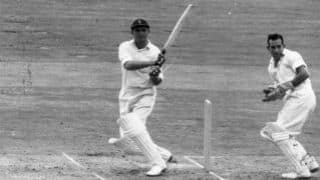 Tom Graveney: The man who played his best cricket after he turned 39