Allan Donald, South Africa’s bowling coach, sat in the balcony of the Sophia Gardens stadium at Cardiff, shaking in anticipation. He was well tucked into warm clothes, which suggested it wasn’t the weather that was irking him. 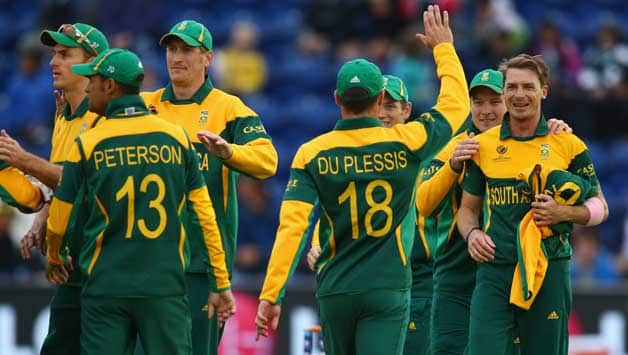 Allan Donald, South Africa’s bowling coach, sat in the balcony of the Sophia Gardens stadium at Cardiff, shaking in anticipation. He was well tucked into warm clothes, which suggested it wasn’t the weather that was irking him.

The visuals of the infamous 1999 World Cup semi-final clash against Australia would’ve flashed in front of his eyes where he was stranded mid-pitch, watching Adam Gilchrist dislodge the bails in utter disbelief. South Africa had managed to pull off a loss from what seemed like a straightforward victory to go crashing out of the tournament. Four years later, Donald was part of the side that ended up with another tied game, this time against Sri Lanka in the group stages. It was the familiar feeling of ‘so close yet so far’ for the Proteas’ as they narrowly missed out on qualifying for the Super Six stage.

Donald was probably experiencing déjà vu as South Africa and West Indies were going neck-to-neck in the group B match, with Duckworth and Lewis threatening to take over the proceedings in the rain-marred game of the ICC Champions Trophy 2013 on June 14.

The rain refused to make a grand entry or stay away entirely, with constant drizzle leaving both dugouts trying to figure out who will have an edge over the other based on D/L calculations.

After having a stronghold on the game for a major period of the game, Marlon Samuels and Kieron Pollard threatened to take it away from the South Africans in a jiffy. They may not accept it now, but one could sense panic among the eleven players clad in the new green and yellow South African jersey. They would have been bracing themselves for the worst possible outcome, as the dreadful ‘C-word’ began to loom large. It was almost as if the entire universe was conspiring against them and pulling off a cruel joke time and again. But the tides swayed to the other side this time.

Pollard and Samuels shifted gears like professional drivers on a go-karting circuit. Even before the Proteas’ could realise, the Windies had narrowed in on the par score based on D/L method. The pressure was mounting and South Africa were showing signs of bottling up yet again.

Dale Steyn was not too keen on that though. Amidst all the chaos, he was the adhesive that held the South African unit together. The West Indies were on 99 for three from 17 overs when they went for broke by taking the batting powerplay of three overs. With rain continuing to come down sporadically, it was a very brave move to go for the powerplay in a bid to close in on the D/L-based par score.

AB de Villiers brought back Steyn who managed to strangle the Windies batsmen at the crease to maintain a safe distance between their total and the par score. Meanwhile, rain decided to take a break and let the sun shine brightly on two sets of highly nervous cricketers indulging in high-intensity cricket.  In Samuels and Pollard, West Indies had all their hopes pined. West Indies came in with the hope and pressure of delivering a victory in the 50-over tournament, after their successful sojourn in last year’s World T20. But here they were facing the risk of falling short by quite a margin.

The duo added 58 runs off just 33 deliveries to keep their side afloat while South Africa were running for cover. Steyn pulled them back in the 24th over with a full delivery that was a perfect concoction of pace and late seam movement, enough to jag back the stumps. Samuels was removed. Rain came back almost immediately, as if to appreciate the magical touch of the world’s current best bowler.

Moments later, Pollard and Dwayne Bravo were at the crease, throwing their bats at everything in an attempt to surpass the D/L score. And they did.

At the end of the 26th over, West Indies were on 190 for five, as many as four runs ahead of what was required of them at that stage. The sun was out again but Donald could still feel the chill, probably worse by that moment. When Ryan McLaren began his run up in the 27th over, there were chances of the match going all the way till end and not letting Duckworth- Lewis decide the fate of either teams. However, such was not the case.

McLaren ran in and dug one short which Pollard went after. The ball took the top-edge and flew high in the air. As all the fielders, transfixed in their respective fielding positions watching in anticipation, Steyn latched on to the ball at third man. That wicket brought back the rains and this time it wasn’t just a drizzle. It was potent enough to throw one side out of the tournament.

The score was 190 for six in 26.1 overs, with the par score pushed to 190 due to the fall of the wicket. The South Africans looked heavenwards and found small droplets getting heavier by the minute, but they wholeheartedly embraced it. The teams were forced off the field and the rain refused to die down, giving South Africa and West Indies one of the most nerve-wrecking tied matches of all time. The tie also meant that South Africa had just emerged victorious in a so-called knockout match of a major tournament using D/L. Talk about poetic justice!

It was a cruel end to West Indies’ campaign but the South Africans braved a familiar storm to die another day.

With Group A still wide open, South Africa could face any one of England, New Zealand, Australia or Sri Lanka in the first semi-final at the Kensington Oval in London on June 19. It is going to be one step at a time for the Proteas, but a win in the semis could go a long way to give credibility to the fact that they shouldn’t be associated with the ‘chokers’ tag anymore. It’s a herculean task, but achievable nonetheless. It will be a test of nerve for de Villiers and his young side but they will have to play this with the thought of ‘now or never’ in their mind.

Whether they can overcome two strong opponents in two crucial matches will be interesting to watch. Is it really time for their redemption? Is it time for South Africa to hurl the monkey off their backs and clinch a major trophy?

Let’s just leave that to their ability and nature’s artistry.