Australia will be treating Saturday s ICC Champions Trophy 2017 match against England as a final, simply because it has no other choice.

Australia will be treating Saturday s match against England as a final, simply because it has no other choice. It s win or bust for them at this stage, after a second washout in its second match has left it without a result, let alone a win. England, on the other hand, comes into the game on the back of two successive victories and a place already secured in the semifinals. Some may expect England to be a little too relaxed, knowing the job is already done, and as such give Australia the advantage. But those don t know anything about this England side! England wants to win. And if Australia beats them on Saturday, it s because it deserve to. Make no mistake about it, the Aussies are a tough prospect for anyone, no matter the context of the match. FULL CRICKET SCORECARD: England vs Australia, ICC Champions Trophy 2017 – Match 10 at Edgbaston

I ve been looking forward to this game for a while now and I ll be there with the family to enjoy what will hopefully be a wonderful game of cricket. We ve got England, arguably the form side, and Australia which has players in its side which any nation would bite their arm off for. What s not to love? It ll be interesting to see if Australia plays its four pace guys, their all-out pace attack. That would seem the natural choice for me to go all out aggressive and try to knock England over.

With Mitchell Starc, it has got one of the best players in the world and is a master both at swinging the ball and of the yorker. You get no respite with Starc as he s as adept as taking out the top end as skittling out the bottom order. Add Josh Hazlewood, Pat Cummins and James Pattinson to the mix and you ve got a lethal quartet of bowlers. ICC CT 2017: England is yet to play its best game, says Ian Bell post victory vs New Zealand

Steve Smith, Aaron Finch and David Warner are all world-class players and for Australia to do well, you d think two of the three would have to be in the runs. I suspect England will feel very happy with itself if it contains those three. We ve seen before and I touched upon it in my last column how lethal Glenn Maxwell can be on when he gets going something England will be very aware of – and in Travis Head it has got a cracking player.

I saw a bit of Head s talent at Yorkshire and you expect him to be a player to look out for years to come. It ll be a really good wicket at Edgbaston, and, fingers crossed if the rain stays away, there could be a lot of runs scored. I can imagine the England team is rubbing its hands together at the prospect of knocking Australia, not only the old enemy, but also one of their major rivals for the trophy, out at this early stage. ICC CT 2017: New Zealand’s fate is no longer in its own hands, feels Shane Bond post defeat vs England

I can t imagine there ll be too many changes for England, as I d like to think it would aim to keep the momentum going. I had the pleasure of playing in the Big Bash over the winter and it was a surreal experience having Australia fans cheering me on and wishing me luck, rather than giving me stick from the boundary, which was the norm from whenever I visited with England.

I absolutely loved it. I can t thank the Aussie public enough for their kindness and support when I was out there, but saying that, I don t think they ll begrudge me backing my country when it comes to Saturday s match. Come Saturday I ll be cheering on the England boys from the stands and if I’m certain of one thing, it s that both sets of fans will make it an occasion to remember. 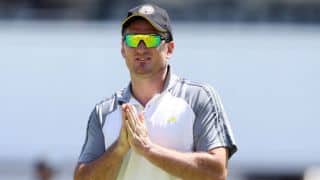