Heading into the Champions Trophy, Australia have a full-strength squad, fit and raring to get going.

First things first: the ongoing payment row between the cricketers and Cricket Australia (CA) is not going to have any effect on the ICC Champions Trophy 2017. The current Memorandum of Understanding (MoU) expires on June 30, and for now, Steven Smith s team is required to aim guns at the tournament beginning June 1. Placed alongside hosts England, Bangladesh and New Zealand in Group A, Australia can fancy a smooth run into the business end, given the current form and team composition. Smith refuses to take foot off the gas pedal and is making runs in heaps, whereas Mitchell Starc is back in the mix along with the likes of Chris Lynn, Marcus Stoinis and a few more.

It was Michael Clarke s team that won the last major ICC tournament, in favourable conditions at home in 2015. Since then, a string of retirements may have jolted Australian cricket, even pushing them back into rebuilding mode, but the 50-over side has always retained its firepower. Australia will have learned from the 0-5 humiliation in South Africa last year and will be wary of the tactical glitches. Heading into the Champions Trophy, Australia have a full-strength squad, fit and raring to get going.

Strengths: Smith remains at the cynosure in this Australian side, which reached England a few days ago and began training. Coming off a gruelling four months in India, if there was one player who came out with flying colours in both the four-Test series as well as the IPL it was Smith. He made 499 runs in the Tests, and finished fourth in sheet of the most run-scorers in the IPL with 472 runs. It would only be a rude shock if Smith does not get runs in England.

While Smith s form promises a lot to Australia, David Warner s exploits cannot be brushed aside. Having fared poorly in the Test series in India, Warner finished with more than 600 runs in IPL 10 the only batsman to breach that mark and ended up being crowed the much-coveted Orange Cap. While at the forefront are Smith and Warner, Australia have solidity in the middle in form of Moises Henriques, Glenn Maxwell, Aaron Finch, Chris Lynn, Marcus Stoinis and Matthew Wade. It remains to be seen where Lynn fits in for Australia. Towards the end of their series against Pakistan, Travis Head was made to open with Warner.

James Pattinson s return to the national side will be much anticipated, especially after the fast bowler has spent significant time playing in the County Championship. Pattinson, who had declined a ticket to India as Starc s replacement, has grabbed a lot of attention with his slight change in bowling action that has resulted in a lot of wickets in Sheffield Shield as well as for Nottinghamshire.

Pat Cummins has attained his peak, and his exploits in the IPL provide encouraging signs to Australia. More than just being a handy batsman in the lower-order, Cummins would enjoy bowler-friendly conditions in England after the three-month toil on flat decks in India.

Weakness: On paper, as well as given the current form of their players, Australia seem to be having a formidable side. The leaders in Smith and Warner are presented with the first opportunity to stamp authority by winning a major tournament. However, there are a few factors that may provide hindrance to Australia s plans.

In conditions favourable to the fast bowlers, the two primary fast bowlers will be coming off a long break. Attaining momentum right from the beginning in a tournament as short as the Champions Trophy would be critical for each competing side, and the pair of Starc and Josh Hazlewood will face a tough challenge.

Starc is returning to action having missed the IPL and half of the India tour due to an old ankle issue. On the other hand, Hazlewood did not play any form of cricket since the conclusion of the India tour.

Australia have carried only one spinner for this assignment, and Adam Zampa s first trip to England with the national side would present a tough task for the leg-spinner who had finished 2016 as the highest ODI wicket-taker. In fact, John Hastings, who was the second-highest wicket-taker last year, is also named in the touring party.

Wade did score a century against Pakistan in the five-match series, but Australia would like their wicketkeeper-batsman to get runs on a more consistent basis.

However, Ponting s Australia improvised and attained their best in the next two editions. In the tournament s editions held in India (2006-07) and in South Africa (2009-10), Australia lost a mere one match as they won these two tournaments on the trot.

In 2013, defeats to England and Sri Lanka as well as a washed out contest against New Zealand resulted in Australia bowing out of the competition early. 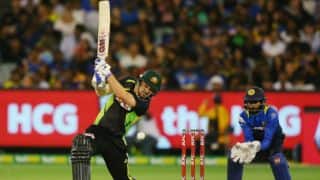 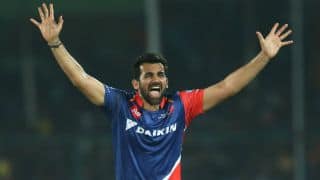