Let s hope the rain stays away and the Australians can get out there and put on a show of their skills and talent in the ICC Champions Trophy 2017.

It is do or die for Australia against England at Edgbaston on Saturday. Let s hope the rain stays away and the Aussies can get out there and put on a show of their skills and talent. There are some interesting sub-plots that may or may not affect the outcome of this match. Firstly, the weather. It seems crazy that a team can be knocked out or progress through to the semi-finals without even finishing a match, but both scenarios are still possible at this stage from an Australian point of view. From an English perspective, I feel they come into the match as favourites. They have won both their matches, playing some excellent cricket with their confidence high. They are also playing at home where they know the conditions so well. Sometimes there is an extra pressure and expectation on the host nation to win, but I feel that this won t affect England due to the calm nature of the leaders in the group. FULL CRICKET SCORECARD: England vs Australia, ICC Champions Trophy 2017 Match 10 at Edgbaston

Trevor Bayliss and Eoin Morgan are both cool and calm characters, and will keep the group relaxed and not bothered about the external pressures placed on the team throughout the tournament, particularly as the pressure rises during the semi and final stages. England also has players in good touch, which is ominous for Australia. Alex Hales, Joe Root, Eoin Morgan and Jos Buttler have already played significant knocks in the tournament. With the ball, Liam Plunkett has been among the wickets and Jake Ball has bounced back well against New Zealand after a tough game against Bangladesh.

Jason Roy has been short of runs, but I see him as a danger man. He will be desperate for a score and may just like the extra pace of the Australian attack, which I think suits his game more. Ben Stokes is also a danger man for Australia with his all-round ability. His bowling has improved but his batting and, in particular, his power is what worries me the most. If he gets going at the end of the innings, he can be a very hard man to bowl to. The England team looks settled, which is important as each player will know his role and expectation in the team. ICC CT 2017: AUS are tough prospect, no matter the context of the match

On the other hand, the Australians would have trained and prepared well but will feel a little underdone with match intensity conditioning since both their games were washed out. The bowling group bounced back very well against Bangladesh after an average performance in the first game against New Zealand, which is a good sign, but none of the Australia batsmen have had a lot of time at the crease which is not ideal coming into this crunch match against England. Another interesting sub-plot may be the desperation factor of both teams.

England is already through to the semi-finals and so there is less pressure on it. Australia must win to progress and will be desperate to put in its best possible performance. Will England just relax a little opening the door for Australia? ARRR, I don t think so!!! There is a great rivalry between Australia and England spanning over a century and any match between the two teams is always hotly contested. I am sure England would love nothing else but to knock the dangerous Australian team out of the tournament. ICC CT 2017: England is yet to play its best game, says Ian Bell post victory vs New Zealand

For Australia, it is important to be desperate but to not try too hard to force the result. Sometimes the harder you try, the worse you play. I feel the Aussies need to be calm and clear, and look to execute their skills and plans better and for longer than England and let the result take care of itself. It is also important to look down and not up with regards to the weather. They must keep their focus on what they can control and the weather is something they can t.

There will again be the push for Australia to play four quick bowlers and hit England with everything it has got, but I liked the balance of Australia attack in the previous match against Bangladesh. Three quality quick bowlers (one being a left-armer) in Mitchell Starc, Josh Hazlewood and Pat Cummins; a wicket-taking wrist spinner in Adam Zampa, Moises Henriques to bowl some handy medium-pace, and Travis Head and Glenn Maxwell to help with more-than-handy off spin gives Australia a wonderfully balanced attack. ICC CT 2017: New Zealand s fate is no longer in its own hands, feels Shane Bond post defeat vs England

Steve Smith generally reads the game well and can pick the appropriate times to hit England hard with the pace of Cummins and Starc, control the run-rate with Hazelwood, go for wickets in the middle overs with Zampa and bowl Maxwell and Head if the two left-handers of Morgan and Stokes are batting together. It is one of the biggest rivalries in world sport, Australia versus England, and if the weather holds this should be one of the matches of the tournament. There are so many different scenarios and sub-plots, but at the end of the day all that matters is who gets over the line and wins. For Australia, it must be a win or we are heading home. 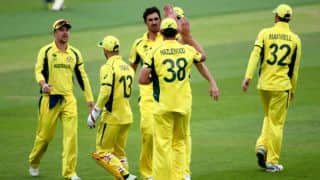