While India will look to defend their champions tag, Pakistan will be looking to create history.

This is it the final that the entire cricket universe was waiting for is here. India and Pakistan play the final leg and this time to clinch the coveted ICC Champions Trophy 2017 title. While India will look to defend their champions tag, Pakistan will be looking to create history. This match is expected to be far more competitive than the previous encounter. There is no doubt that Pakistan are coming off leaving some of the top ODI teams South Africa, England and Sri Lanka stunned. However, to beat India they would require some additional energy bars. Barring the forgettable Sri Lanka match, India have lived up to the favourites tag. FULL CRICKET SCORECARD: India vs Pakistan, ICC Champions Trophy 2017 Final at The Oval

Pakistan, on the other hand, have left every team puzzled so far. India would have to come up with instant strategies if they wish to counterattack Pakistan s plans. After leaving England awestruck with their 8-wicket victory, Pakistan have shown they are ready to take on the India challenge. Pakistan are also ahead in ODIs head-to-head record and will be in a no nonsense mood on Sunday as well.

Amidst this massive clash, there are some clashes within them which can prove be the game changers for their side on Sunday. Let us look at few of the key battles for this relishing contest:

Rohit Sharma vs Mohammad Aamer: After coming back from a long layoff and dismal performance in IPL 2017, Rohit has come a long way in Champions Trophy. He started with consecutive fifties and eased India to the semi-final with sublime century his first in Champions Trophy. The century against Bangladesh could have been his second had he not been dismissed for 91 against Pakistan due to a mix-up. He is now just behind his opening partner Shikhar Dhawan amongst the leading run-scorers at an average of 101.33 and strike rate of 87.60.

On the other hand, Aamer is fit and will be raring to go against the pace lover Rohit. Both the players open the innings for their respective sides. After a back spasm, Aamer will be itching to trap his bunny once again. It is not an unknown fact that Aamer has dismissed Rohit twice in recent times, including Asia Cup T20 and ICC World T20 last year. Let’s not forget, Rohit had even labelled Aamer as an ordinary bowler then. It will be interesting to see whether Aamer emerges winner third time too or will it be Rohit this time who has the last laugh.

MS Dhoni vs Sarfraz Ahmed: It is the clash of the wicketkeepers. Both have shown form at the time of need. Interestingly, both the players scored massive runs against the same opponent Sri Lanka. Dhoni has 63 runs and 4 catches in the tournament while Sarfraz edges him with 76 runs and five catches. Although Sarfraz takes the call on the field being the skipper, Dhoni never gets tired to organise the field being the former skipper.

With both the players possessing all-round skills with the bat and behind the wickets, it zeroes down to who ends with most runs and catches.

India s batting vs Pakistan s bowling: When it comes to batting, India have been clinical with their performance, especially their opening pair comprising of Rohit and Dhawan. The latter has carried his form from the previous edition and is enjoying the top position with tally of 317 runs at 79.25. Rohit comes second while Virat Kohli is at No. 5 with 253 runs at an incredible 253.

India s middle-order has not faced much pressure over the past few games. Even if they have come out, it has been fireworks all around the ground. Yuvraj has a fifty to his name so does Dhoni and Hardik Pandya s quick-fire runs have come handy.

Pakistan s bowling, on the other hand, has been class apart and in sync. The top pick amongst the bowlers has been Hasan Ali. Two Man of the Match awards and sitting on top of the leading wicket-taker s charts comfortably with 10 wickets at 17.20 along with impressive economy rate of 4.52 sets him apart from the others. The loss of Wahab Riaz at the beginning of the tournament and Aamer s absence in the semi-final has allowed Junaid and Hasan to settle. Rumman Raees is a wild card for Pakistan ending with 2 for 44 against England. Imad Wasim and Shadab Khan have also been decent in the spin department.

With both these elements forming the core of the two sides, who punches above the weight would be interesting to see.

Virat Kohli vs Hasan Ali: Both have the same flow of energy and both have been on top of their game in every match. Kohli s unbeaten 81 in the first match are still fresh in the mind of Pakistan. His valiant knock comprised of 6 fours and 3 sixes. To counterattack him, Hasan would be ideal who comes to bowl after the Powerplay overs.

Hasan was first noticed in PSL s inaugural edition while playing for Peshawar Zalmi. Today he is the leading wicket-taker in Champions Trophy. His ability to reverse swing and bring the stadium alive is what makes him stand-out. 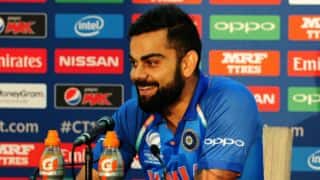