India beat Bangladesh convincingly by 9 wickets in semi-final 2 of ICC Champions Trophy 2017 at Edgbaston in Birmingham.

Defending champions India came with a stellar and match-winning performance. They beat Bangladesh convincingly by 9 wickets in semi-final 2 of ICC Champions Trophy 2017 at Edgbaston, Birmingham on Thursday. With this win, India seal their spot in the final of the tournament, where they will clash with Pakistan at The Oval in London on Sunday. Bangladesh, who were playing the semi-final of any ODI tournament for the very first time, succumbed to the pressure from the defending champions. With the focus already shifting towards the intensifying final, let us quickly have a look at the few of the highlights this match did produce. FULL CRICKET SCORECARD: India vs Bangladesh, ICC Champions Trophy 2017 Semi-Final 2 at Edgbaston

Bhuvneshwar Kumar s early wickets: In what turned out to be a wise decision to bowl first, India got the initial results: he got rid of opener Soumya Sarkar in the opening over, bowled for a duck. The second wicket of Sabbir Rahman followed in the seventh over: he was dismissed for 19 off 21 deliveries including 4 fours. Bhuvneshwar finished with 10-1-53-2.

13th over from Hardik Pandya: Although Bangladesh were off to a shaky start, the 13th over of the innings, from Pandya, did allow them to pull back up considerably. 14 runs were given away: Hardik started with a dot to Tamim Iqbal followed by a couple; unfortunately, it turned out to be a no-ball as there were only four fielders inside the circle. The free hit resulted in a couple, followed by two singles. The fifth ball was another no-ball (this time due to over stepping). The free hit delivery resulted in a wide. The following delivery was hit for a four by Tamim. The over ended with a single. FULL CRICKET UPDATES: India vs Bangladesh, ICC Champions Trophy 2017 Semi-Final 2 at Edgbaston

Five penalties for Bangladesh: In one of the rare moments, Bangladesh were awarded 5 penalty runs. As he does so often, MS Dhoni had removed his gloves; the gloves had landed on the ground, while a throw from the fielder in an attempt of run out saw the ball landing on the glove; that resulted in 5 penalty runs.

Tamim Iqbal-Mushfiqur Rahim partnership: Following a dull start, the pair of Tamim and Mushfiqur steadied the Bangladesh innings to a big extent. They managed to put up a stand of 123 for the third wicket. Tamim contributed 63 to the stand and Mushfiqur 52 as Bangladesh managed to get past 150. ICC CT 2017: Virat Kohli scores fastest 8,000 runs in ODIs

Bangladesh s collapse: Following the dismissal of Tamim for 70 in the 28th over, the Bangladesh innings again began to show signs of dullness. Although they managed to go past the 200-run mark, there were hardly any partnerships. Nevertheless, the pair of Mosaddek Hossain and Mahmudullah put up some resistance, and skipper Mashrafe Mortaza along with Taskin Ahmed did throw their bat around, allowing Bangladesh to go past 250.

Jasprit Bumrah ends well: Apart from Jadhav, Bumrah had a good day out as well, finishing with 10-1-39-2. He bowled beautifully in the death, claiming Mahmudullah (21) and Mosaddek (15).

Rohit Sharma-Virat Kohli s brilliance: In what was the main highlight of the Indian innings was the emphatic 178-run stand for the second wicket between Rohit and Kohli. They completely outplayed the Bangladesh bowlers and stole the game away from them. Rohit contributed 82 while Kohli got 96 in the stand.

Rohit s day out: Rohit scored his 11th ODI century, remaining unbeaten on 123 off 129 deliveries including 15 fours and a six. He also became the second Indian to score a hundred in the knockout stage of ICC ODI tournaments, after Ganguly (who has 3). Sachin Tendulkar has 1 as well.

Virat Kohli s superfast 8,000: In case you have still not got it, Kohli became the fastest batsman to reach 8,000 ODI runs. He went past AB de Villiers, who previously held the record, reaching there in 182 innings. Kohli scored an unbeaten 96 off 78 deliveries today including 13 fours. 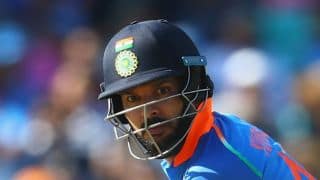 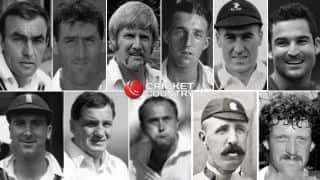