Let us decipher as to why New Zealand returned home early from the tournament and also assign marks out of 10 to their players based on their performance.

In March 2015, New Zealand finished the ICC Cricket World Cup as the second best side. A little over two years later, they became the first side to get eliminated from the ICC Champions Trophy 2017. Though the ongoing flagship event is much shorter and more competitive with only eight best teams in the fray, New Zealand s early exit did raise a few eyebrows. Their campaign came to a crashing end after Bangladesh stunned them with a 5-wicket win in their last Group A fixture.

Let us decipher as to why New Zealand returned home early from the tournament and also assign marks out of 10 to their players based on their performance.

Wobbly top and middle order: One of the key reasons why New Zealand had gone the distance in the ICC World Cup 2015 was their openers and middle order coming good. Martin Guptill was the top scorer of the tournament. Brendon McCullum also scored heavily and got side off to fiery starts. Grant Elliott scored bulk of the runs in the middle order. Williamson, Corey Anderson, Ross Taylor all were amongst the runs. However, in stark contrast, New Zealand s openers and middle order were wobbly during the Champions Trophy. While Guptill and Luke Ronchi were inconsistent, Anderson, Neil Broom and James Neesham were big flops.

Lack of quality spinner: Imran Tahir won South Africa their encounter against Sri Lanka. Imad Wasim was exceptional against South Africa. England played both Adil Rashid and Moeen Ali. Australia featured an attacking leg-spinner in their XI. On the contrary, New Zealand stuck to Mitchell Santner, who finished the tournament with just a solitary wicket at 101. On the contrary, the team left out Jeetan Patel in all the games. Patel, who plays his County cricket for Warwickshire at Edgbaston, could have come in handy with all his experience in the English conditions.

English legend Geoffrey Boycott recently wrote in one of his columns that some teams, including India, were committing the mistake of thinking that the ball will seam in England when the weather is poor, and so they must pick seam bowlers over spinners. However, new and improved drainage systems at grounds in England have helped groundsmen produce good surfaces for batting and the ball does not seam as anticipated. He suggested that spinners were required to introduce variation, alter the pace of the attack, unsettle batsmen, and take wickets on tracks where it was almost impossible to stop batsmen from posting 300.

Rain, luck: Lastly, rain and luck also played a part in New Zealand s early exit. After posting 291 in their rain-curtailed first match, the Kiwis had the Australians on the mat at 53 for 3 in 9 overs. This was when the rain stopped the match and eventually got it abandoned. Had rain not interrupted, New Zealand could have won the match and possibly carried that momentum in the next games against England and Bangladesh. But alas, it was not meant to be.

New Zealand played the same XI in all the games. Let us rate their players on a scale of 10.

As mentioned above, Williamson was the best batsman for New Zealand, carrying the burden of his side on his shoulders. Till the time he stayed at the wicket, New Zealand innings headed into the right direction. But once he was dismissed, the Kiwi innings collapsed on all the occasions. His batting was flawless, but he loses his points for not sticking till the end and being unimaginative as the captain on a few occasions.

Tim Southee was good with the ball in both the completed games for New Zealand. Against England, he took 2 for 44 from 9.3 overs, whereas against Bangladesh, he returned with figures of 3 for 45. In fact, his early strikes had reduced Bangladesh to 3 for 12 chasing 266. However, he did not get enough assistance from his colleagues as New Zealand went on to lose both the finished games.

Taylor got starts in all the games but failed to convert them into big scores. Being the senior-most player of the side, he was required to bat around the younger batsmen and hold the innings, something he significantly failed to apply. He could not avert the middle-order collapses, and hence loses his points.

Adam Milne s searing pace put New Zealand in commanding position against Australia. He removed Aaron Finch and Moises Henriques in successive overs to leave Australia in tatters. But rain came to the rescue and the World Champions escaped. Though he was amongst the wickets in the next two games, he leaked runs at 6.84 per over.

26, 27, 33: these were Guptill s scores in the three games. Again, being the senior member of the squad, he was expected to come up with much better performances. Got starts only to throw them away, Guptill gets 5 out of 10.

Ronchi hit a fantastic fifty against Australia his first against the, first as an opener and first since January 2015. But that s that. There is nothing more to write about his Champions Trophy campaign. He gets 5 out of 10.

Being the spearhead of the attack, more was expected from Boult. However, he failed to get his side early breakthroughs and could not keep a check on the flow of runs as well.

In the two games where Anderson bowled, he picked up 3 wickets and conceded runs at 6.16 RPO. However, being a batting all-rounder, Anderson failed to set things on fire, scoring a mere 18 runs in 3 innings. In fact, he gets those marks only for playing the dual role.

Another all-rounder, Neesham failed to contribute both with the bat as well as ball. Batting at No. 6, he produced scores of 6, 18 and 23. He sent down 7 wicket-less overs in the two matches he got a chance to bowl. Being preferred over someone like Colin de Grandhomme, Neesham was a big letdown.

8, 3 and 14* were the scores Santner could come up with in the 3 games. With the ball, he failed to get breakthroughs in the middle overs. Being the sole spinner in the XI, his role was to attack and go for wickets. But his uninspiring show not just let the Kiwis down, but also raised questions on Patel s exclusion.

New Zealand: Overall, New Zealand get 5 out of 10 for their Champions Trophy campaign. 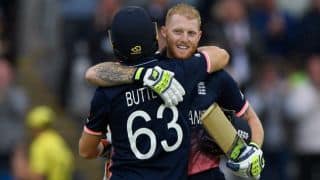