Pakistan beat hosts England by 8 wickets in semi-final 1 at Cardiff, as they made their way into their maiden final of the ICC Champions Trophy 2017.

Having put up a splendid performance the entire tournament, Pakistan beat hosts England by 8 wickets in semi-final 1 at the SWALEC Stadium in Cardiff on Wednesday, as they made their way into their maiden final of the ICC Champions Trophy 2017. Hasan Ali s eventful spell of 3 for 35 Azhar Ali s resilient 76 allowed Pakistan to achieve the historic feat. They will now face the winner of semi-final 2 between India and Bangladesh, at Edgbaston, Birmingham on Thursday. Meanwhile, the match did have some talking points as we take a look at the highlights from this enthralling tie. Full cricket scorecard: England vs Pakistan, ICC Champions Trophy 2017, Semi-Final 1 at Cardiff

Jonny Bairstow opens for first time in ODIs: For the first time ever in his England senior career of six years, Bairstow opened batting. Despite opening for the first time, he rarely panicked. He was off to a brisk start, scoring 43 off 57 balls including 4 fours. He was also the second-highest run-scorer for England after Joe Root. His innings played a crucial role in England getting past the 200-run mark.

Eventful start: In what was an eventful start, Pakistan opted for a review in the second ball of the day, going up for a leg-before against Bairstow. The umpire turned it down. The review went in favour of England as well. The fourth over saw another review, this time from England when Alex Hales was given out leg-before; once again it went in favour of England. Full cricket updates: England vs Pakistan, ICC Champions Trophy 2017, Semi-Final 1 at Cardiff

Rumman Raees first wicket: Raees claimed his maiden ODI wicket when he dismissed Hales for a mere 13. He also claimed the wicket of Liam Plunkett for 9. He finished with the figures of 2 for 44.

Hasan Ali continues to impress: However, Pakistan s hero of the match was Hasan, who has been in splendid form in the tournament, continued his form as he got rid of Bairstow for 43. It turned out to be a crucial wicket, as hardly any batsman apart from him and Root managed to fire for England. Hasan finished with the figures of 3 for 35 and was named Man of the Match.

Torment of Pakistan bowlers: The other Pakistan bowlers managed to terrorise the English batsmen as well. Junaid Khan (2 for 42) and Shadab Khan (1 for 40) contributed to the wicket-taking tally, while Imad Wasim and Mohammad Hafeez made significant and decent contributions as well. Semi-final 1, ICC Champions Trophy 2017: Disciplined Pakistan dismantle England for 211

England collapse: There was little to talk about England s show with the bat once Root fell. There was hardly a decent partnership. Wickets kept falling at regular intervals. They did not hit a single boundary after the 38th over, which partially took the game away from them. In the first 25 overs, England were 118 for 2; in the last 24.5 overs they could only manage 98 runs, losing the remaining 8.

Pakistani openers take control: With a low target in front of them, the Pakistan opening pair of Azhar Ali and Fakhar Zaman was off to a good start. Fakhar Zaman scored a sturdy 57 off 58 balls with 7 fours and a six. The openers added 118, more or less sealing the tie. At the other end Azhar Ali scored a sound 76 off 100 deliveries, including 5 fours and a six.

Mark Wood only bright point: In an otherwise dull day for England bowling, Wood was the lone star in the English attack. He bowled steadily and was the only bowler who gave Pakistan a hard time to settle down. Although he did not manage to claim a wicket, he gave away 37 runs in 8 overs, bothering the batsmen at times. 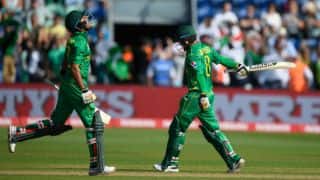 Pakistan ending 18-year drought, other statistical highlights from their clash against England in Champions Trophy 2017