Pakistan has a big challenge at hand as it takes on South Africa in a must-win match under floodlights in Edgbaston.

Pakistan has a big challenge at hand as it takes on South Africa in a must-win match under floodlights in Edgbaston on Wednesday. Pakistan will have to turn things around really fast after its forgettable performance against India. More than the margin of defeat, the listless and abject surrender must be hurting the squad. But I d like to stay positive and say that Pakistan has a great chance to turn things around against the number-one ranked ODI team. South Africa, in its opener against Sri Lanka, looked an extremely formidable side, possessing a strong batting line-up and firepower in its bowling. FULL CRICKET SCORECARD: ICC Champions Trophy 2017, Pakistan vs South Africa – Match 7 at Edgbaston

Hashim Amla is in a rich vein of form and scored a serene century in the match. Other than Amla, South Africa has class operators in AB de Villiers, Quinton de Kock, Faf du Plessis and JP Duminy. Its bowling might be weaker in comparison, only because the support bowlers for spearheads Kagiso Rabada and Imran Tahir are a tad less impressive. Rabada and Tahir are top-ranked ODI bowlers but Pakistan must not allow them to impose their presence on the game.

Pakistan batsmen need to free their minds and play with a positive mindset, which would allow them to go after the bowling while rotating the strike intelligently. The Pakistan batsmen seemed to have simply frozen against India and looked clueless in the face of mounting run-rate. The team will have to do much better against South Africa, which is a top-class fielding unit. The batsmen will have to commit fully to strike-rotation and will have to play only a small number of dot balls. If they are caught in two minds, the South African fielders will surely make life tougher for them. ICC CT 2017: Md Yousuf demands sacking of Arthur as PAK’s coach

In the years gone by, we used to worry about our batting and fielding, while the bowling department was what we used to rely on. Unfortunately, Pakistan has regressed in bowling and now all three departments of the game need to be worked on more than ever. Pakistan needs to make a solid plan that the bowlers can implement. The bowling line-up is set to be rejigged after Wahab Riaz s withdrawal and I feel that Junaid Khan should be included in the playing 11. On his day, Junaid can be a handful with the new ball and Pakistan must take a gamble with him since there isn t much of a backup available.

Pakistan s top-order batsmen would have to shoulder extra responsibility, the batsmen getting a start must convert it into big scores if the team has to post a competitive total. I think we can post a score of around 300, only if we apply ourselves properly with the bat and build a solid foundation. The task might seem uphill after the batting disaster against India but it isn t impossible. We should retain the batting line-up that played against India since our bench strength isn t that great either. The players backed in the opening game must be given at least one more chance at redemption since in a world event like the ICC Champions Trophy major changes rarely work. ICC CT 2017 Points Table, Team Standings & Match Results

South Africa starts as the firm favourite but Pakistan remains capable of bouncing back from adversity, I would be really happy to see the team fight hard and make a match out of it rather than worrying too much about the result. The Edgbaston pitch is full of runs and the batsmen can express themselves without the fear of uneven bounce or the ball gripping alarmingly. As I have stated earlier, I would love to see Pakistan make it count and express its ability without fear.

Realistically though, to beat the Proteas, Pakistan would need to bring its absolute best to the park and fielding would be of paramount importance. I can recall our thrilling win against an equally formidable South African team in a crucial ICC Cricket World Cup 2015 fixture at the Eden Park in Auckland. At that time, we had been almost written off before the match but succeeded in recording a famous win. It can surely happen again. Good luck Men in Green!

This content is available to use for all media free of charge, but please credit www.icc-cricket.com through a hyperlink in the article or in full URL in print. 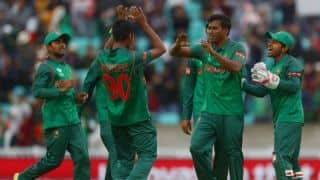