He does not have an attack that Clive Lloyd had at his command while leading the all-conquering West Indies. He neither has the overt aggression of Ian Chappell or the cocky swagger of Ricky Ponting, two captains who had teams of unlimited talent in every department of the game. Yet, Mahendra Singh Dhoni’s claims of being the most successful captain in modern day cricket with its multifaceted challenges cannot be denied. Arunabha Sengupta looks at some of his achievements and difference in approach with other talismanic skippers of recent times. 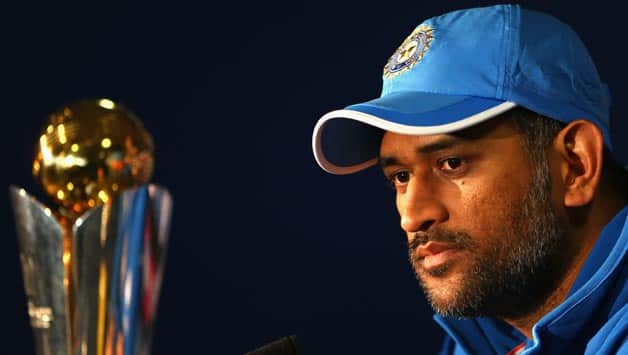 MS Dhoni… a win in the Champions Trophy final today — on Sunday, June 23, 2013 — would give him a sweep of all that a modern international cricketer can hope to achieve © Getty Images

He does not have an attack that Clive Lloyd had at his command while leading the all-conquering West Indies. He neither has the overt aggression of Ian Chappell or the cocky swagger of Ricky Ponting, two captains who had teams of unlimited talent in every department of the game. Yet, Mahendra Singh Dhoni’s claims of being the most successful captain in modern day cricket with its multifaceted challenges cannot be denied. Arunabha Sengupta looks at some of his achievements and difference in approach with other talismanic skippers of recent times.

If the Indians do manage to ride on the supreme form they have shown in this tournament and end up on top on Sunday, it will culminate in completing Mahendra Singh Dhoni’s already exceptional curriculum vitae with the only missing tournament played on a global scale.

The Indian captain has already led his team to triumph in the Twenty 20 World Cup in 2007 and the traditional 50-over World Cup in 2011. He has led the team to the pinnacle of No 1 rankings in both Tests and One-Day Internationals (ODIs).

And at the risk of making the purists squirm, we have to admit that the only other tournaments played for enormous stakes with the most serious talent pool in the world are the Indian Premier League and the Champions League T20. MS Dhoni has both these under his belt.

A look at the table below will underline the degree of success he has achieved. The only other captain in the modern era who can claim to come close is Ricky Ponting.

While the former Australian skipper has won a couple of World Cups and lifted the Champions Trophy twice as well, success has eluded him in the T20 formats. No other international cricket captain can lay claim to occupying more than two columns in the above table.

It does lend credence to the claim that in the modern era, Dhoni is indeed the most successful captain in world cricket. With the changing face of the game, one has to concede that he has been exemplary in his adaptation to the challenges thrown up by the different formats and the rigours of club leagues that have encroached into the cricketing calendar to vie for importance with the regular contests between nations.

The enigma surrounding Dhoni is that he has achieved all this without having an exceptional team at his disposal, as enjoyed by the likes of Ricky Ponting or Graeme Smith during their stints. In the previous eras, highly successful captains like Clive Lloyd and Ian Chappell were at the helm of phenomenal sides with potent bowling attacks that had the ability to run through any batting side. Dhoni’s team has been periodically blessed with batting riches, although even there he has had to struggle with ageing superstars and upcoming young talent who have found their feet gradually under his stewardship. Apart from that, the bowling firepower under him has been rather constrained right through his reign. He has managed to triumph at all levels with the Munaf Patels, Ishant Sharmas and the erratic Harbhajan Singhs. Perhaps only Zaheer Khan had served him as a truly world class bowler for a while, but even his performance has been lukewarm since 2011.

Dhoni has been aware of the limitations of the resources at his disposal, tapped their strengths to perfection and worked around the shortcomings with phenomenal success. And whenever it has been necessary — and that amounts to almost always — he has stepped in and led from the very front with his bat. He has not even been shy of taking off the gloves and pads and turning his arm over with the ball as well.

While many, including the blatantly parochial sections of his countrymen, continue to doubt his credentials, Dhoni has curved a niche for himself. The success, as demonstrated in the table, cannot be overlooked. And he has rebuilt the team with fascinating forbearance, using his detached calmness to serve as a shield against the murky match-fixing controversies, concentrating on the job at hand and responding to every bout of criticism with performance.

The alpha male style worked for Ian Chappell when there were Dennis Lillee and Jeff Thomson bowling for him. The swagger served Viv Richards well when the bowling attack consisted of four-pronged hostile pace eager to pepper the batsmen with the threat of bodily harm all day. The arrogance succeeded for Ricky Ponting when Glenn McGrath and Shane Warne bowled for him and the batting line up bristled with untold talent. However, all these and their combinations tend to bomb when the resources are depleted and the team itself steps into mediocrity. It is then all the arrogance and the swagger serve only to fan emotions and personality cults, but hardly amount to a tournament win.

In contrast, people may struggle to come to terms with Dhoni’s underplayed approach. Burdened with constraints, Dhoni is a new age leader, combining suave dignity with understated confidence, working within the limitations and optimising his resources to the fullest. And however many sceptics may continue to voice reservations, he has indeed been the most successful captain of the modern times.