World Cup 1999 was the first edition sponsored and organised by ICC.

The shift of power was evident with Jagmohan Dalmiya stepping in as International Cricket Council (ICC) Chairman in 1997. It can be argued whether Dalmiya was the greatest connoisseur of the sport, but he certainly knew how to convert opportunities into cash. He ensured World Cup 1999 was completely controlled by ICC: it was the beginning of a trend that continues till today.

The tournament structure went through a revamp as well. The 12 teams were divided into two groups, just like 1996 — but six teams qualified to the next round instead of eight to go play in the Super Sixes. Not only did three teams qualify from each group, they also carried forward their points against the other qualified teams. Thus, since Zimbabwe had beaten both India and South Africa, and South Africa had beaten India in the league stage, India went forward with zero points, South Africa with two, and Zimbabwe with four.

After 16 years, England was nominated as the main venue, though four matches were played outside proper England. Grange Cricket Club, Raeburn Place, Edinburgh (Scotland) hosted two matches, while Castle Avenue, Dublin (Ireland) hosted one. The other venue was VRA Ground, Amstelveen (Netherlands). On May 26 it became the second ground with a tree inside it to host a World Cup encounter; St Lawrence Ground, Canterbury had become the first, eight days before.

Bangladesh and Scotland made their maiden World Cup appearances, while Kenya made their second. Pakistan won four matches on the trot before their shock defeat against Bangladesh at Northampton. Australia, having lost two of their first three matches, clawed back into the World Cup; though they easily beat West Indies at Old Trafford, they made a conscious effort to proceed slowly to ensure West Indies qualified along with Pakistan and them. It did not work, since New Zealand clobbered Bangladesh to chase their target at breakneck pace: Australia qualified with zero points.

India, too, lost their first two matches to have a horrid start to their campaign, whereas South Africa won their first four matches (the credit for at least two of which should go to Lance Klusener). India turned things around with three consecutive victories, but with Zimbabwe surprising South Africa at Chelmsford they went in to the Super Sixes with zero as well.

Pakistan carried their momentum to the second round. South Africa smashed them to pull off a victory at Trent Bridge, while Australia easily overcame India at The Oval. India won the adrenaline-packed encounter against Pakistan at Old Trafford, but were knocked out of the tournament as New Zealand beat them. Not only did Australia beat South Africa in their last Super Sixes match, they also finished second, ahead of South Africa in run rate.

While Shoaib Akhtar gave Pakistan an easy victory in the first semi-final at Old Trafford, the second one at Edgbaston was an all-time classic. In what was probably the greatest One-Day International (ODI) of all time, South Africa and Australia played a match that resulted in a heart-stopping tie. Some last-over madness saw Allan Donald almost surviving a run out, before getting out next ball, and Australia qualified on the basis of their advantage in the Super Sixes.

The final at Lord’s was a damp squib. Warne turned out to be more than a handful for Pakistan (the ball that beat Ijaz Ahmed’s bat to knock the off-stump back was outstanding), who crumbled to 132. Adam Gilchrist started in maniacal fashion, helping Australia lift the Trophy with 179 balls to spare.

Tendulkar scores emotional 140 against Kenya after his father’s demise

Semi-final: did Australia and South Africa play the greatest ODI ever?

– World Cup 1999 was the first edition sponsored and organised by ICC.

– Sourav Ganguly and Rahul Dravid put on 318 for the second wicket against Sri Lanka at Taunton. It remains the only 300-run partnership in World Cup cricket.

– World Cup 1999 saw the first tied match in the history of the tournament, in the iconic semi-final between Australia and South Africa at Edgbaston.

– New Zealand became the first team to bowl through a complete innings without conceding a single extra (against South Africa at Faisalabad).

– Saqlain Mushtaq became the second bowler (after Chetan Sharma) to take a hat-trick in World Cup.

– The first five hundreds of World Cup 1999 were scored by Indians.

– Shane Warne was named Man of the Match in both the semi-final at Edgbaston and in the final at Lord’s. He emulated Mohinder Amarnath (1983) and Aravinda de Silva (1996).

– Pakistan became the first Asian side to lose a World Cup final.

– Geoff Marsh became the first cricketer to lift the World Cup as both player and coach. 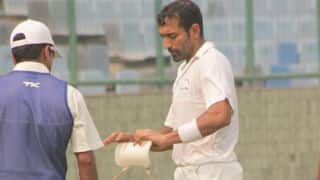