There was a sliver of hope for Zimbabwe if they could better Pakistan. Unfortunately, they were out-batted by Saeed Anwar, and Saqlain Mushtaq provided the perfect finishing touch.

June 11, 1999. Zimbabwe’s fairytale run in the league stage ended once they reached the Super Sixes. However, there was a sliver of hope if they could better Pakistan. Unfortunately, they were out-batted by Saeed Anwar, and Saqlain Mushtaq provided the perfect finishing touch. Abhishek Mukherjee recollects a mismatched contest at The Oval.

Zimbabwe had started off well in ICC Cricket World Cup 1999. They had beaten Kenya at Taunton; India at New Road; upset India at Grace Road; and despite defeats against Sri Lanka at New Road and England at Trent Bridge, Zimbabwe cruised through to the Super Sixes with a comprehensive 48-run victory over South Africa at Chelmsford. Not only did they reach the next round, they also went in with full points, since India and South Africa were the other teams to qualify.

Pakistan, on the other hand, were perhaps the strongest side of the league stage, perhaps with the exception of South Africa. They convincingly beat West Indies at Bristol, Scotland at Chester-le-Street, Australia at Headingley, and New Zealand at Derby before their shock defeat against Bangladesh at Northampton. Just like Zimbabwe, they, too, went with full points.

Things took a different course in the next round. While Pakistan were trounced by Lance Klusener at Trent Bridge, Zimbabwe managed a point following an abandoned match against New Zealand at Headingley. Pakistan lost against India at Old Trafford as well, while Zimbabwe went down to Australia at Lord’s.

Before the clash at The Oval, thus, the tally read: South Africa 6, Pakistan 4, Australia 4, Zimbabwe 5, New Zealand 3, and India 2. While India were knocked out of the tournament, Zimbabwe still had a chance even if they lost — if India beat New Zealand or South Africa beat Australia.

Zimbabwe’s schedule was hectic: it was their third match in six days. Johnson, who had removed the Australian openers in the previous match (before scoring 132*), was declared unfit but played on as a batsman. Wasim Akram won the toss and decided to bat.

A genius at work

Pakistan have produced better batsmen than Saeed Anwar, but perhaps none who could accumulate so much with such wristy elegance. Teammates basked on the glory of his achievements; Spectators got their money worth; and despite being at the receiving end, the opposition could not help but admire the sheer aesthetic pleasure of Anwar in full flow.

He took off by lofting Mpumelelo Mbangwa (affectionately referred to as “Pommie” these days) over mid-wicket; it fell just short of the fence. Three balls later a cover-drive teased two fielders all the way to the ropes. He had a life when Alistair Campbell dropped him at first slip off Mbangwa; Anwar was on 19 at that time.

At the other end, Wajahatullah Wasti opened up, taking three boundaries from five overs from Heath Streak. It was the first time a Pakistan opening stand reached fifty. When Guy Whittall came on, Wajahat lofted him over square-leg for six, and hit two fours in the next four balls. Pakistan raced to 74 without loss in 15 overs.

Whittall had his revenge when Wajahat tried to clear mid-off, but the edge drive flew over cover; Adam Huckle ran in to take an outstanding catch. Wajahat’s 40 had come off 42 balls. Anwar flicked Henry Olonga through mid-wicket to bring up his fifty from 74 balls, and on-drove Huckle for four. Pakistan were 116 for 1 from 21, and a total in excess of 280 looked on the cards.

There was another distraction when Ijaz Ahmed pushed one to Murray Goodwin at mid-wicket and set off. Anwar sent him back, but Ijaz kept running, and helplessly saw Goodwin’s throw reaching Andy Flower, resulting in the inevitable.

The wickets halted the progress of Anwar to some extent, and Inzamam-ul-Haq, too, was cautious in his approach. There was a phase of consolidation, and both Whittall and Huckle bowled tightly, but Anwar slowly opened up: he paddle-swept Huckle, pulled Whittall, late-cut Huckle, and pulled Grant Flower and Huckle for fours. Then Paul Strange pitched one outside leg, Inzamam stepped out to connect, missed completely, and was stumped.

Pakistan had scored only 67 from the last 15 overs, and sensing some urgency, Wasim stepped out himself. Shortly afterwards, Anwar cover-drove to reach his hundred off 140 balls; four balls later he tried to pull Olonga, top-edged, and Andy Flower took the skier. Four balls later Huckle trapped Wasim LBW for a duck. Pakistan were 195 for five in the 39th over as Shahid Afridi walked out to join Moin Khan.

A butcher at work

Streak returned, and almost immediately Afridi stepped out; he connected it, and the ball soared over the cover into the stands. There was a flurry of wickets when Grant Flower ran out Moin with a direct hit from backward point; and Streak had Azhar Mahmood caught-behind off a late out-swinger, and yorked Abdur Razzaq (later Abdul) with the next delivery to claim his 100th wicket in ODIs.

Afridi switched gears. He waited till the 48th over, dealing mostly in singles; then Strang came on round the wicket and pitched it on the rough; it was a delivery similar to one that had got Inzamam; Afridi hoisted it against the turn; it landed into the stands. He kept strike, and flicked Olonga so hard that though there was a deep-square leg, he could not move even a couple of feet. He went for an almighty slog and holed out to mid-off the next ball for a 29-ball 37. Saqlain and Shoaib played out the remaining balls, and Pakistan put up a formidable 271 for 9.

Johnson began in style, flicking Wasim through mid-wicket for four in the first over. However, the Pakistan attack proved to be too strong for the Zimbabwe top-order: Shoaib sent down a rip-roaring bouncer that Johnson could somehow fend off; shortly afterwards, a trademark Shoaib yorker hit the base of Grant Flower’s middle-stump.

Wasim replaced Shoaib with Razzaq after a four-over burst, and Goodwin played one straight to Afridi at square-leg. Then came the big wicket, when Andy Flower chopped one on to the stumps off Razzaq. Then Campbell tried to pull Razzaq, and the top-edge looped to mid-on. Zimbabwe were 50 for 4 from 15.2 overs.

Meanwhile, Johnson carried on with his strokes with Whittall for company. The pair added 33 from 65 before Whittall was caught at slip off Mahmood. Johnson brought up his fifty, off 86 balls, later that over, but did not last long: Mahmood came round the wicket, the ball jagged back into Johnson, and Steve Bucknor raised his finger after some deliberation.

Shoaib came back, and was rewarded immediately as Mahmood plucked a one-handed catch at slip to dismiss Strang. Streak and Olonga hung on grimly, and Zimbabwe, seven wickets down, tried to bat out the 50 overs: a few runs would at least get them a decent run rate. They reached 123 after 40 overs. Saqlain started the fresh over…

Olonga stepped out and swung his bat. Had it connected it would probably have crossed British borders, but unfortunately it went to Moin, his gloves just above the stumps; the bails were duly removed. Huckle gave the charge next ball; the ball sped through the gate, and Moin did the rest. Saqlain was on a hat-trick, and the sight of Mbangwa walking out probably raised his heart.

Mbangwa had no pretension whatsoever of being a batsman. At the end of his career his Test average read 2; ODI, 4.85; First-Class, 6.89; List A, 4.63. He would never manage a double-digit score from 15 Tests.

Saqlain had another hat-trick, back in 1996-97 at Peshawar — against the same opponents. On that occasion his victims were Grant Flower, John Rennie, and Andy Whittall. Only one other person had managed two ODI hat-tricks till then, and he was leading Pakistan in the match. There was also the small matter of being the second bowler to take a hat-trick in a World Cup, after Chetan Sharma in 1987.

Wasim gave him a slip, a gully, a silly-point, a forward short-leg, and a leg-slip. Poor Mbangwa, a man with a very high back-lift, looked completely clueless. He tried to play an awkward shot, the ball hit his pads; this time Bucknor did not take time.

And history was created.

– Anwar carried his form into the semifinal against New Zealand at Old Trafford following a Shoaib blitz. His 113 not out helped Pakistan chase down 242 for the loss of 1 wicket. Anwar and Wajahat added 194 for the opening stand.

– Streak finished with 237 ODI wickets, still way ahead of any other Zimbabwe bowler. Prosper Utseya (130 before ICC Cricket World Cup 2015), Grant Flower (104), and Ray Price (100) are the only others to reach three figures.

Man of the Match: Saeed Anwar. 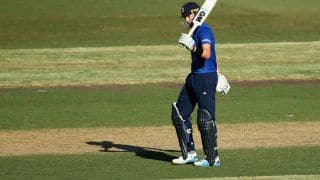 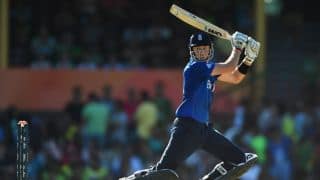