It will not be an exaggeration to refer to ICC World Cup 2003 as Sachin Tendulkar’s tournament.

Though Sourav Ganguly came second on the runs chart, he finished more than 200 short of Tendulkar, and Ricky Ponting, the third man on the list, managed fifty less than Ganguly; the Indian captain also became the first batsman since Mark Waugh to score three hundreds in a single World Cup, while Ponting and Marvan Atapattu managed two each.

With 23 wickets Chaminda Vaas finished at the top of the bowling chart, with Brett Lee (22) and Glenn McGrath (21) in hot pursuit. Vasbert Drakes, on the other hand, became the third bowler (after Gary Gilmour in 1975 and Ashantha de Mel in 1983) to claim two five-wicket hauls in the same edition of the World Cup. Vaas and Lee also took hat-tricks, the third and fourth in the history of World Cup cricket.

Tendulkar, as mentioned above, finished head and shoulders above everyone else, though Herschelle Gibbs registered a commendable 384 from six innings at an average that closed in to hundred. Just ahead of Gibbs was Adam Gilchrist with 408 runs at 41 and without a hundred, but his runs came at 105 per hundred balls.

Gibbs’ average was phenomenal, but it only managed to put him at three. Leading the way was Andrew Symonds, who scored 326 being dismissed only twice, and had a strike rate of 91; Ramnaresh Sarwan, on the other hand, finished with an average of 104.50 and a strike rate of 96. Damien Martyn and Rahul Dravid were not among the top two scorers for their countries, but they topped the average charts.

John Davison, the surprise package of the World Cup who registered the fastest hundred in the history of the tournament, scored 226 at a staggering 119 runs per hundred balls. Other surprise entries above the 100-mark included Maurice Odumbe and Scott Styris.

ICC World Cup 2003 witnessed a staggering 21 hundreds, seven of which were shared by Ganguly (three), Ponting (two), and Atapattu (two). Netherlands scored 314 for four in their match against Namibia, which included hundreds from both Feiko Kloppenburg and Klaas-Jan van Noortwijk; Kloppenburg also claimed four for 42. Craig Wishart (172 not out) registered the highest score of the tournament, with Tendulkar (152) registering the only other score in excess of 150.

Vaas, with 23 wickets at 14 and an economy rate of 3.76, was easily the bowler of the tournament. Australia played a match more, but both Lee and McGrath fell short of Vaas’ tally. Shane Bond, with 17 wickets at 18, was the other star of ICC World Cup 2003.

ICC World Cup 2003 was a seamer’s World Cup: barring Vaas, McGrath, and Lee (and Drakes), Andy Bichel had an excellent World Cup with 16 wickets at an outrageous 12, while Wasim Akram, in his farewell tournament, had 12 at 17 apiece.

With two fifers, Drakes’ strike rate of 19 was easily the best in the tournament, but the quartet of Bichel, Lee, Vaas, and Wasim all had strike rates below the 24-mark.

While Andrew Flintoff (2.88) was the most economic bowler of the tournament, Aasif Karim put up an excellent show as well. Karim’s 8.2-6-7-3 against Australia at Kingsmead is well-documented, but he bowled well throughout the World Cup to become the only other bowler with an economy rate of less than three.

Till the tournament Winston Davis was the only bowler to take a seven-for in World Cup cricket. Not only did McGrath (seven for 15) register the best figures in the history of the tournament, Bichel returned figures of seven for 20 as well. Shane Bond, Ashish Nehra, and Vaas all claimed six-fors, making the tournament a treat for fast bowlers.

The first seven World Cups had witnessed two hat-tricks (Chetan Sharma in 1987 and Saqlain Mushtaq in 1999). This edition witnessed that count being doubled. Vaas became the first bowler (he still remains the only one) to take wickets off the first three balls of a One-Day International (ODI) when he removed Hannan Sarkar, Mohammad Ashraful, and Ehsanul Haque (he also claimed Sanwar Hossain in the same over). Lee, on the other hand, accounted for Kennedy Otieno, Brijal Patel, and David Obuya in consecutive balls.

Gilchrist set a new record by taking 21 catches (but no stumping) in a single World Cup, while both Kumar Sangakkara (15 catches, two stumpings) and Dravid (15 catches, one stumping) proved their worth as all-rounders. Mark Boucher, too, put up a spectacular show with 11 catches from a mere six matches.

Once again there was a new world record as Ponting claimed 11 catches from 11 matches. Lee, Dinesh Mongia, and Virender Sehwag all finished with eight catches to finish as joint second.

Though Tendulkar and Ganguly added 244 for the second wicket against Namibia, the unbroken 234 between Ponting and Martyn was possibly the most devastating one. Michael Bevan and Bichel accounted for both the eighth- and ninth-wicket stands, both at St George’s Park, against New Zealand and England respectively.

Perhaps nothing exemplified Australia’s dominance in the tournament more than the fact that they registered the highest score in the final — 359 for two against India. Australia also scored 319 for five against Sri Lanka in the Super Sixes, whereas the other three scores in the top five came against Namibia.

For 24 years Canada’s 45 against England remained the lowest score by a team in the World Cup, but Namibia emulated that against Australia by getting bowled out for the same score. The record, unfortunately, went back to Canada, who were bowled out for 36 by Sri Lanka. 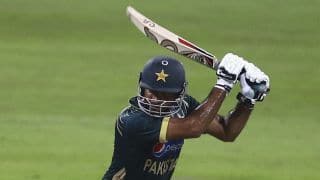