ICC World Cup 2007 has gone down in history as one of the game’s worst tournaments.

Having won two World Cups and made it to the final of a third, it was a wonder that the West Indies never hosted the game’s biggest event till the 2007 edition. It was the ninth time ICC World Cup trophy would be up for grabs, and the first time that it would be played in the Americas. Unfortunately, due to a series of events — two heavyweights not going past the first round, a coach dying under mysterious circumstances, a one-sided final marred by rain and bad umpiring among them — the ICC World Cup 2007 has gone down in history as one of the game’s worst tournaments.

The cricket was not of the highest quality either, if one discounts Australia, that is: Australia were so ahead of the other sides that they never lost more than six wickets, and only once did they bat at below five runs an over. Every side was beaten comprehensively. Glenn McGrath created history with 26 wickets in a single edition of the tournament, Matthew Hayden scored most runs, and Adam Gilchrist took most catches.

The format itself was convulsed; there were far too many teams, and each group seemed stuffed to the brim. Just three games per team in the first round — which gave no room to come back from a bad game — meant that two of the most popular teams, India and Pakistan, got knocked out in the very first round. To add to Pakistan’s woes, their coach Bob Woolmer was found dead under mysterious circumstances after their loss. His death remains unsolved to date.

The upshot to those upsets was that Bangladesh (who beat India) and Ireland (who stunned Pakistan) entered the main draw of the tournament. A match that was supposed to be a climactic battle between arch-rivals India and Pakistan turned out to be thrilling nonetheless, although the protagonists were the two minnows. That Ireland overcame Bangladesh only served to reinforce their aura of being giant-killers — an aura that they carry to date.

One of the major downsides of the tournament was the farcical final between Australia and Sri Lanka. The Australians — who had won every World Cup match they played since the 1999 semi-final — continued to dominate their opponents, beating Sri Lanka with consummate ease after Adam Gilchrist made up for a quiet tournament with a blazing 149 off 104 balls as Australia raced away to 281 for four in 38 overs after rain played spoil-sport. Sri Lanka could only manage 215 for eight in response, though by the end the teams were playing in such poor light that the Australian bowlers had to promise not to bowl fast.

Ireland pull off heist against Zimbabwe on World Cup debut

– Herschelle Gibbs hit six sixes in an over off Netherlands leg-spinner Daan van Bunge. It was the first time the feat was achieved in International cricket and remains the only such occurrence in One-Day Internationals (ODIs).

– India’s 413 for five was the first instance of a team scoring over 400 runs in a World Cup innings. It remains the only 400-plus score in World Cups.

– ICC World Cup 2007 had the most teams in any ODI tournament before or since: 16 teams.

– Since 1983, West Indies became the first cricket side to host a World Cup all by itself. Canada had requested to host a couple of matches, but that did not come through.

– ICC World Cup 2007 was the first time that all three countries of the UK — England, Ireland, and Scotland — played in the same World Cup. ICC World Cup 2015 will be only the second time this happens.

– The top seven Australian batsmen recorded strike rates of over 100 in their match against South Africa — the first such occurrence in an ODI innings lasting 50 overs.

– Dwayne Leverock — who famously dove one-handed to take the catch of Robin Uthappa — became the heaviest cricketer ever to play World Cup.

– Leverock took the catch off Malachi Jones, who, at 17 years 266 days, became the youngest person to take a wicket in World Cup. 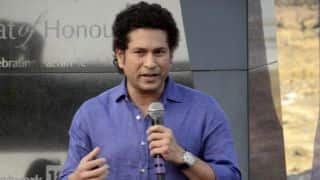