The toss does not have such a great bearing on the match any more.

It can be very disappointing when an event as grand as the World Cup final is largely influenced by the spin of a coin. Day-Night matches, especially in the last decade, have been heavily dependent on the outcome of the toss. However, Arunabha Sengupta looks at the numbers to detect encouraging signs that the toss is not that big a factor any more.

The advantage of batting in the sun, the threat of revised targets due to rain, the pressure of chasing under artificial lights and the traditional crumbling of wickets as time progresses. PREVIEW: Australia (AUS) vs New Zealand (NZ) ICC Cricket World Cup 2015 FINAL

Most captains agree that it is better to bat first in a Day-Night game.

And it is not mere gut feel. There are results aplenty to show us that the Day-Night game was definitely heavily loaded in favour of the side batting first.

It would be rather disappointing if Michael Clarke or Brendon McCullum started with that sort of an advantage even before a ball is bowled. STATS PREVIEW: Australia (AUS) vs New Zealand (NZ) ICC Cricket World Cup 2015 FINAL

(To avoid skewing of data, only the matches between the top eight cricketing nations have been considered: Australia, England, India, New Zealand, Pakistan, Sri Lanka, South Africa and West Indies).

It did not take the captains long to become aware of this rather lopsided advantage. While 62% of the captains had opted to bat first on winning the toss in the 1980s, the number increased steeply to 69% in the 1990s and 76% in the 2000s. READ: New Zealand dream of toppling Australia in ICC Cricket World Cup 2015 final

Winning the toss and batting first was, if not half the battle, at least a significant portion of it during the 2000s. When captains followed this formula, they won 53% of their games and lost just 41%, the remaining being tied or abandoned. Similarly in the 1990s the side winning the toss and batting triumphed on 54% of the times while losing in just 42% of the occasions. ICC Cricket World Cup 2015 final could be the last match I see, says Martin Crowe

To the general reader, these figures may not look huge. But statistically they are significant, and can be determined as such by simple tests of proportion. And if the game is loaded by a big gap in the percentages, it underlines extreme importance of the toss.

Day-Night matches, however, do not really provide the only case of such disparity. If we consider the Day matches, the matches were heavily loaded in favour of the side fielding first in the 1970s, 1980s and the 2000s.

However, during the last few years, equations have been evened to a great extent. Both Day matches and Day-Night encounters seem to be far less dependent on the toss.  This can perhaps be attributed to the increase of Twenty20 matches and as a result more and more expertise of chasing under lights. Add to that the fact that several Twenty20 matches are played wholly under lights. This can also be the result of some other facet of the evolution of the game. However, in this regard, the game is getting fairer. The coin can no longer suck the contest out of the fixtures.

As will be apparent from the first table, during this decade, of the 282 contested Day-Night matches, 267 have had outright results. And of them, 128 have been won by the side batting first and 139 by the second.  The balance has shifted back towards, and beyond, equality.

The skippers have taken their time to realise this. The decision to bat first on winning the toss has remained high, but has come down from 76% in the 2000s to 67% in the 2010s. And the side winning the toss and batting first have won on only 49% of the times.  On 51%, they have actually ended up losing the game.

Hence, the toss does not have such a great bearing on the match any more.  We can perhaps enjoy the final without the fear that whoever between Clarke and McCullum wins the spin of coin will end up with a telling advantage in the game.

The modern game has been subjected to a lot of criticism in the current days, especially as the World Cup has thrown up higher and higher scores.  However, this is one feature where there has been definite improvement — in fact, beyond the Day-Night game. Indeed, at the time of writing, there is 50-50 parity in Day matches during the 2010s.

In both the cases, Day-Night and Day matches, the move towards parity between the sides batting first and second have been statistically significant.

The game is going through a series of evolutionary steps. If this has made the end result dependent more on the bat and ball rather than silver and copper, it is a welcome positive. 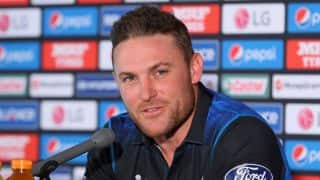