ICC World Cup 2015 format mirrors the one in the subcontinent four years ago.

The cricket calendar is generally devoid of context and inventiveness. Meaningless bilateral One-Day and Twenty20 Internationals are thrust down our ravenous throats. That cricket’s biggest jamboree, the ICC World Cup 2015, should suffer the same fate is simply beyond the pale, feels Ankur Dhawan.

The World Cup format has been tweaked here and there since introduction. Its success has hinged on random experimentation. In recent times the sanctity of the game itself has been under a cloud, especially owing to the parasitic dependence on broadcasters who don’t give two hoots about the fundamentals of the game.

The ICC World Cup 2007 ‘debacle’ was a case in point. The premature elimination of India and Pakistan killed the event. The rest of the tournament was rebuffed by half of the miffed cricket spectators. India and Pakistan’s  exit was at a highly inopportune hour and it wiped the sheen of the event. Beneath the veneer, Australia’s win was simply academic for half the average cricket fan who did not seem to care; as a result TRPs reached a nadir. The catastrophe left broadcasters chagrined and that was the end of it.

The International Cricket Council (ICC) learnt a lesson. They chalked out a foolproof blueprint (similar to the 1996 edition) for the next World Cup so that India and Pakistan basically needed one win each to at least grab a semi final berth, and Sri Lanka came gift-wrapped, so everybody was happy. It was an astronomical commercial success. In fact, it was financially the most successful World Cup in history; but it spiked the sport’s glorious uncertainties that we adore.

The incestuous nexus of the crisis is glaringly obvious. India’s presence is required at the business end of any world event. India attract the eyeballs, hence advertisers and broadcasters. India is where the money is. India must be accommodated. The Indian board is the most powerful sporting body on the planet (well, almost). They ensure that even if a non-entity somehow thwarts India on the field, the format offers a safety net.

World Cup 2015 format mirrors the one in the subcontinent four years ago. The event on the whole comprises 49 matches; 42 of these group matches are superfluous. These 42 matches will decide the top eight teams, which, barring an upset or two, is a list everyone knows beforehand. Once the eight are decided, they play a mere seven matches between them, and presto, the champion is announced. An average tournament followed by three good games should suffice.

Of course, the mechanical explanation for this act of sheer folly, offered by anyone in world cricket’s pecking order, is that the lesser teams ought to be catered to (and that is partially true); how else, otherwise, is the game expected to spread its proverbial wings? But hiding behind the façade of accommodating the associates, ICC has unabashedly served its short term self interest like a mercenary gold-digging corporation.

The truth is that we could have still had a more relevant tournament with the minnows playing their part. Reverting to the 1992 world cup format that had each team play the other once before the top four made it to the semis may not have been prudent considering the length. But with a little perspicacity, the current format could have been dabbled with, cut short, allowing a direct link between the group stage and the semi final which would have injected the group stage with much needed incentive and context. 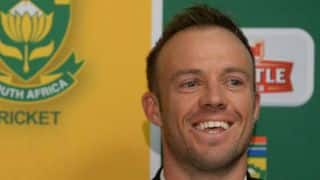