In 2003, Symonds was one of the three to have scored a century batting for the first time.

Many players will be playing in a World Cup for the first time in their career in ICC World Cup 2015. Before they make some great performances in the World Cup debut, Bharath Seervi lists the players who had scored centuries on their World Cup debut in the previous editions.

ICC Cricket World Cup 2015 is on its way. For many players this would be their first chance of appearing in World Cup. Some of them will be even making their One-Day International (ODI) debuts in the tournament. At the end every player would like to begin their World Cup career with a good performance and maintain their position in the team for the entire tournament and in future.

There have been a set of batsmen who got off to their World Cup career with a century and influenced the team’s performances. Virat Kohli was the last to do so: scored an unbeaten 100 off 83 balls against Bangladesh in the first match of ICC World Cup 2011 at Dhaka.  Let us have a look at players who have done the same in previous World Cups.

In the first World Cup in 1975, there were two occasions on the first day itself. On June 7, 1975 the first four World Cup matches were played: England played India at Lord’s, and New Zealand took on East Africa at Edgbaston. Dennis Amiss scored 137 and Glenn Turner an unbeaten 171 off 201 balls. It was their first World Cup matches, and Turner piled up many records: most balls in an ODI innings and highest ODI score, and more.

Allan Lamb had a similar start in 1983 scoring 102 against New Zealand at The Oval. Trevor Chappell did the same in his first World Cup match by accumulating 110 against India at Trent Bridge in the same edition.

So far 13 batsmen have this feat to their name. With the avalanche of runs in the past few years, we may see more in the 2015 edition of the tournament.

A few players missed this feat by a small margin. Three batsmen got out in nineties in their first World Cup innings: Martin Crowe, Robin Smith and Sourav Ganguly.

Let us also list the players who ended their World Cup career with a century.

Eight batsmen scored centuries in World Cups and never appeared again after that knock. Three of them were from Netherlands who do not have the ODI status at present. The most famous of these is definitely the knock by Adam Gilchrist in the final of ICC World Cup 2007 where he smashed 149 off just 104 balls.

Another Australian, David Boon, scored a hundred century in his last World Cup match in 1992. In the last World Cup in India, Ricky Ponting’s century in the quarter-final could not bring victory to his team. Brad Hodge is also likely to remain in the list, as is Imran Nazir, who is set to miss two World Cups on the trot.

There are a few batsmen who are likely to end their ODI careers after this World Cup and not be a part of World Cup. Tillakaratne Dilshan, Kumar Sangakkara, Mahela Jayawardene, Shahid Afridi, Misbah-ul-Haq, Michael Clarke are a few examples. Let us wait and watch how they end their World Cup career! 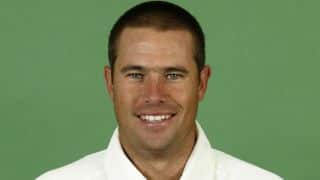