There were many wonderful catches in the ICC Cricket World Cup 2015, let’s have a look.

No. 5  Craig Ervine vs South Africa: In the first match that South Africa played in the ICC Cricket World Cup 2015, Zimbabwe had them in trouble. AB de Villiers and David Miller were trying to resurrect when de Villiers made room and hit one down to long off. Craig Ervine ran across from long off, leaped up to take the catch, realised he may be going over the ropes, threw the ball up in the air, jumped back into play and took the catch. These catches near the boundary ropes, converting wickets out of nowhere are now becoming a norm. South Africa did win the match but that moment did cause a few jitters. READ: ICC Cricket World Cup 2015: Top 10 innings

No. 4 Daniel Vettori vs West Indies: In the quarter-final, Martin Guptill had scored a brilliant 237 not out against the West Indies to set a huge total. Trent Boult had already taken out Johnson Charles. The Windies needed to score quickly, Marlon Samuels made room for himself, carved a short and wide one over backward point. The ball seemed to be destined for a maximum before Dan the Man Vettori had a leap of faith and plucked the ball out of thin air and stood there nonchalantly. It was a stunning effort from the veteran cricketer to jump in the air, put out his left hand and take the ball which was going over the ropes. It was surely one of the memorable moments for the man who was playing his last World Cup. READ: ICC Cricket World Cup 2015: The Associate XI

No 3  Jerome Taylor vs South Africa: When you talk about coolness, you can’t leave out the West Indies. They did not quite have the best of the World Cup but they had their moments.  In the game versus South Africa, de Villiers was the main destroyer but David Miller was just joining in the fun. When he clobbered one down the ground, there was no doubt that it was going for a maximum. Jerome Taylor though had other ideas: he ran across a bit from long on, leaped up and grabbed the ball with his left hand, with both feet high in the air. Just a cool catch maan, just the type for West Indies. READ: Top 10 batsmen in ICC Cricket World Cup 2015

No. 2 Martin Guptill vs South Africa: Martin Guptill not only made an impact with the bat, he was electric in the field too. In the high octane semi-final against South Africa he had one amazing fielding moment. Rilee Rossouw cut one hard in the air towards point. The ball was travelling at a rapid pace and away from the fielder but Guptill, standing at point, flew to his left and took a blinder to dismiss the batsman. Though that brought a quick scoring David Miller at the crease, this was surely a catch to remember for all. READ: Top 10 bowlers in ICC Cricket World Cup 2015

No 1 Steven Smith vs England: Steven Smith had made his presence felt on the very first day of the ICC Cricket World Cup 2015. Australia had piled up a huge total. England were 92/5. Mitchell Marsh bowled a half-volley outside off, Jos Buttler drilled it hard towards covers. Steven Smith, the Superman from Australia who loves Spiderman, was standing at short extra cover. Smith had very little time to react but he was good enough as he flung himself to his right and took a blinder to sink England even further. This man has taken some stunners before as well, both in the inner ring and in the outfield too. READ: Top 10 fielders in ICC Cricket World Cup 2015 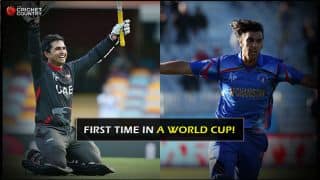