It is staggering that a World Cup being staged in England is missing out on Ireland and Scotland who could have helped light up this party further.

Hamid Hassan charged in, beating Aaron Finch with an inswinger that clipped his thigh on its way to the keeper. His hand went up in half-an-appeal, though aware he would never get the decision. Then, he stared at the batsman like any fast bowler would. Finch was unmoved.

At first glance, Afghanistan versus Australia doesn t entice interest as a contest. The former team is playing its second ODI World Cup; the latter team has won this trophy five teams. There is no way you can sell it as a blockbuster game, perhaps in keeping with how one-sided this tournament is shaping up to be thus far.

No one told the Afghans though, and they wouldn t listen, even if did. It is what describes this cricket team, one that was born in refugee camps and came together through several hardships at every step. They fight, at every step, punching above their weight at times even, and make their presence felt. So what, if a powerhouse Australian team defending champions, no less is in front of them?

Call it mercurial, or an adventurous streak, or chutzpah; words don t matter. Instead, awareness of the game situation does. In a match-up like this, most lowly teams would field first to prolong the game. Not Afghanistan their batting may be weak but putting up a score and defending it is their strong suit. Entering this game with a chance of winning less than the probability of finding aliens walking about in London, Afghanistan still went ahead with what suited them best.

Sure, they were bowled out for 207. But it was never about the runs. Instead, it was about showcasing what they could do a mix of audacity and pensive shot selection, interspersed with a few streaky sixes at the end. 5/2 in eight balls to their credit, Afghanistan didn t cower down. The 51-run partnership between Rahmat Shah and Hashmatullah Shahidi ought to be played on-loop in the Pakistan and Sri Lanka dressing rooms. Perhaps their batsmen would learn how to bat with patience in face of a batting collapse.

Australia exerted control again, of course. Seeing the fight-back, they tightened things up and cut the run flow with fielding dominance. It resulted in a flurry of wickets. Again, Afghanistan fought back another partnership, another few wickets rinse, repeat. Gulbadin Naib and Najibullah Zadran resurrected the innings just when it looked like collapsing. Rashid Khan s flourish saw them cross 200. It was never going to be enough. But on any other day, a game seesawing like this would have been sensational to watch. Why wasn t it so?

Because, there was inevitability about the whole thing as Australian quality shone throughout, whether with bat or ball. Let there be no doubt that the gap between these two teams is vast it is apt justification for the ICC and host board ECB wanting a ten-team ODI World Cup.

What about the gap between Pakistan and West Indies, or the gap between New Zealand and Sri Lanka are we supposed to sidestep that? Are we not supposed to talk about it at all? Australia weren t the only ones who were asked tough questions on Saturday.

Make no mistake, Afghanistan know their place under the sun. They are not going to win this World Cup. They are not going to make the semi-finals either. Yet, they are not here to make up the numbers, because they are not playing for their country s sacrifices alone. This is no longer just a story of struggle from whatever happened in their backyard alone. It is now also about what is happening in cricket s backyard.

In that, Afghanistan are also representing Ireland, Scotland and Zimbabwe. It is staggering that a World Cup being staged in England is missing out on those two former teams neighbours who could have helped light up this party further. Meanwhile, it is astonishing that the latter part of many World Cup chapters have simply been denied a spot because, well, some administrators thought so.

Players across different teams might like this format for their own reasons. Sponsors and broadcasters have their reason too. Yet, so far, this World Cup has failed to catch fire. At least, Afghanistan s courageous display is not the reason for it. 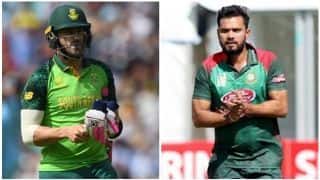 BAN vs SA, Match 5, Cricket World Cup 2019, LIVE streaming: Teams, time in IST and where to watch on TV and online in India 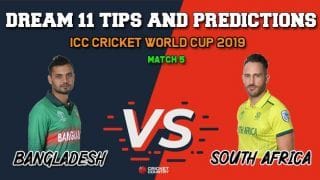