Brathwaite, with a batting average of 14 in one-dayers, and almost single-handedly, pulled off one of the greatest ODI chases.

June 22, 2019. World Cup 2019. Old Trafford, Manchester. Almost three years have passed. Since that fateful night in Kolkata, Brathwaite has not come close to his show-stopping best, let alone produce something similar. In this while, Brathwaite has just one fifty in both one-dayers and T20Is combined. An allrounder of his calibre is next in line after Andre Russell. But he hasn’t done badly of late. In the warm-up against Australia, Brathwaite scored 60 and with the ball against in the league stage, claimed a 3 for 67. That’s more or less it.

Dropped for the Bangladesh match, Brathwaite replaced an injured Russell and produced an innings of a lifetime. Chasing New Zealand’s 392, West Indies were down and almost out of the World Cup, before out walked Brathwaite, with a batting average of 14 in one-dayers, and almost single-handedly pulled off one of the greatest ODI chases of all time. ALSO READ: Great learning curve, says Williamson

And suddenly, the World Cup, which began with predictable results turned on its head. On Friday, Sri Lanka beat England. Earlier in the day, Afghanistan almost surprised India. But because of Brathwaite’s stunning assault, West Indies vs New Zealand can easily go down as the game of the tournament so far.

Imagine this. When Brathwaite walked out, West Indies were reeling. Chris Gayle and Shimron Hetmyer had waged a fight with a 122-run stand. But both batsmen fell in quick succession and that’s when New Zealand began to smell blood. 142 for 2 further became 164 for 7, with Trent Boult returning to take out Ashley Nurse and Evin Lewis. Brathwaite was the last of the recognised batsmen. In front of him, a monumental task. Perhaps even he didn’t fancy chasing it down. But the way Brathwaite responded, he left everyone surprised.

West Indies needed 128 in near about 23 overs with seven wickets left. Their supports, who kept cheering till the time Gayle and Hetmyer were fighting, had began to pack up. The upper stand left of the media box had gotten glaringly empty. But can it be blamed. Even the legendary Curtly Ambrose, got off and left, while another legend, James Anderson exclaimed: “That’s got to be it.” No one expected what was to come.

Brathwaite began positively, crunching three boundaries in a space of seven deliveries before delving into a more cautious approach. Mitchell Santner was flighting the ball, and there was some turn of offer as well. A couple took the edge and went behind. Playing out the next five overs safely, Brathwaite launched Santner to go big. When Colin de Grandhomme sent down a couple of half-trackers, Brathwaite lined himself up and swatted the ball towards cow corner. Once West Indies came down to 96 required off 84, that is when Brathwaite’s eyes lit up.

Even then, he did the sensible thing. Kemar Roach, who had batted so well to give Brathwaite company, poked outside off and he was gone. With Sheldon Cottrell, Brathwaite kept West Indies ticking. Runs required: less than 50. In between those explosive hoicks, there was measured running between the wickets.

Brathwaite was not hesitant in making his partners push for a two when it was available. Brathwaite had a method to his madness. Trent Boult and Lockie Ferguson, New Zealand’s best bowlers of the evening were seen off and negotiated safely. And when the time came, Brathwaite tore into Matt Henry for 24 runs in the 48th – three sixes on the trot, each stinging more than the previous one. The dream was alive.

Less than a meter is what eventually remained between Brathwaite and one of the most miraculous escapes of all time. In the hindsight, he could have taken the single and left it to win the game in the final over. Before Trent Boult took that catch, the ball seemed to be in the air for almost an eternity.

And when he completed it, deadlines aside, the media box came to a standstill. As Brathwaite went down in despair, people from the press had hands on their heads. You couldn’t help but reach out to him. The sight of Ross Taylor consoling him was reminiscent of Grant Elliott offering a hand to Dale Steyn in Auckland four years ago. In terms of heartbreaks, it was right up there.

Brathwaite must be a relieved man to finally be in the news for good reasons. In 2017, he was dropped from the team to work on his bowling and fitness, claimed former West Indies coach Stuart Law. But it takes nothing away from the fact that he is a team player. Late last year, he during a T20 match against Bangladesh, Brathwaite protested an umpire’s call for a no-ball which held up play for almost 10 minutes. Earlier in February, he made way for Jason Holder as captain of the T20 side to keep the ODI squad together ahead of the World Cup. Hence, that look of anguish on his face is going to be felt.

For long, West Indies’ muddled T20 approach has been reasoned as part of their failure to produce better results in ODIs. But Saturday, it was the same approach that almost got them home, with their former T20 star and hero of their second World T20 triumph leading the way. Hopefully, Brathwaite’s next big innings won’t take three years. 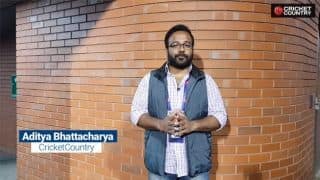 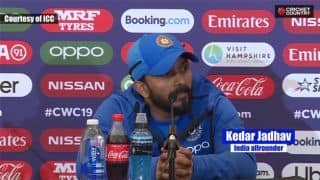