This is the Mitchell Starc Australia have so dearly missed. Fast, menacing, intimidating.

NOTTINGHAM: During the innings interval at Trent Bridge, the audience went into a frenzy. There were beers to be bought, sausage rolls, among a plethora of other delicacies being served at the stadium, to be consumed. The rush was maddening. Near one of the counters, stood a mobile charging station, one of the key attractions of the World Cup 2019 which displays famous video clips from previous World Cups.

A bunch of Australians, while hogging on their hotdogs, were glued to the station. “He’s got to do this again. Only he can stop Gayle and Russell,” exclaimed one of the guys. “He’s got to be the f*****g one. They can chase it down, but not if he gets those two buggers early.”

On the screen, the clip of Mitchell Starc‘s 6/28 against New Zealand in World Cup 2015 was being played. It was a close encounter in Auckland, in which Australia were bowled out for 151, and Starc’s fiery spell almost closed out the game.

Approximately five minutes later, at the ground, Starc bowled a bloodthirsty over to Chris Gayle which almost looked like a battle of egos. He made Gayle jump, fend, hop and nick. He even dismissed him twice but the decision was overturned. It’s not that Gayle has been struggling. He plundered 424 runs against the No 1-ranked side in the world in March and had undergone a rather decent IPL season. Heck, he is coming off a half-century at the same venue against Pakistan, who boast some quality pacers. Yet, here Gayle looked clueless.

Over the past year, white-ball cricket has been on the backburner for Starc. His back injury has limited him to feature in seven one-day internationals between January 2018 and the 2019 World Cup. Think about it. Just seven. Yet, it has taken Starc roughly two games to rediscover the deadly weapon that spurred him to 22 wickets at the last World Cup – the inswinger. For Australia, getting Starc’s body right has always been their key focus, for which they offered him rest while the team was struggling to win matches last year.

After spending six months away due to a back injury, Starc returned to the Australian fold against the Test series against Pakistan in the UAE. You felt for him there. Forget the allegiances. His deliveries lacked swing. You expect that in places like Abu Dhabi and Dubai. But when he was seen bereft of it even at home against South Africa, there were concerns. Major concerns.

With Australia already in the middle of their lowest ebb in international cricket in 2018, Josh Hazlewood struggling with his troubled lower back and Pat Cummins yet to transform into the world-class bowler that he is now, Starc’s form remained a major worry. Those fast swerving yorkers which the screen was displaying was the closest Starc came to producing them.

Against India during the Border-Gavaskar Trophy, the swing re-emerged, but before Starc could capitalise on it, a pectoral muscle injury pushed him to the sidelines. This time, Australia were not going to rush him back, even if that meant risking the ODI series against India. Australia lost the series, but in retrospect, must’ve gained a lot more watching Starc bowl full-throttle on Thursday.

In March, Starc turned up for a warm-up against New Zealand XI. He bowled only five overs across two spells, but clocked 150kmph quite a few times. Starc gave a tantalising glimpse of what he can do with proper fitness, rest and monitoring, and on Thursday, it was the same version of Starc which turned up against the West Indies. It marked the return of the in-swing, and the yorker. His hostile first spell was one of the most thrilling seen in recent memory.

Gayle had recently stated that bowlers are afraid to bowl to him, but at Trent Bridge, the roles seemed to have reversed. Gayle was late to bring his bat down, got beaten by a rising delivery that took the edge and flew over Alex Carrey. He was eventually out lbw, to a ball that moved. Sure enough, had the umpire spotted the previous delivery, which Starc had clearly overstepped, it would have been a free-hit. But not many noticed that it was fired in at 151kmph.

If Starc’s opening spell set the tone for Australia’s defence of 288, in his second burst, he took out another threat, Andre Russell. He had plonked a six and a four off Adam Zampa and even managed to drill Starc down the ground for a boundary. But it was almost as if Starc took that as a personal insult. Next ball was fuller, and Russell skied it to Glenn Maxwell running back from backward point. “Universe Boss” and “Dre Russ” pretty impressive wickets to get.

Starc, however, saved the best for last. With West Indies needing 38 needed off 30 and a set Jason Holder batting on 50-plus in the company of Carlos Brathwaite, scoring at just over a run-a-ball, Starc bowled a phenomenal 46th over. In four balls, Starc removed both. He was aware that with Marcus Stoinis and Nathan Coulter-Nile left to bowl two overs, Holder and Brathwaite would want to see him off. So he rolled his fingers across the ball and foxed Brathwaite with a slow full toss, before almost closing the game with a pacey short ball which Holder gloved to short-fine leg. Cleaning up Sheldon Cottrell in his next and final over was merely a formality.

Dale Steyn has been ruled out of the World Cup. However, with Starc operating like he did on Thursday, he fits himself in the same bracket as Jasprit Bumrah and Kagiso Rabada. Probably even a bracket higher. The run-up, the twitch in his eyes and the entire action where his arms complete a full arc is absolutely breathtaking to watch. Bowl on, Mitch. 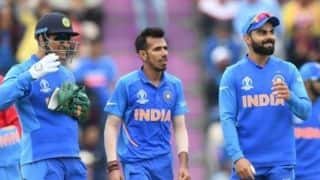