The Bengaluru-based coach could not hide his joy as Mayank earned an ODI call up and that too in India s World Cup squad, replacing injured Vijay Shankar.

For us, it is all about the journey that we have travelled together. It has been amazing because some of the experiences that I have shared with him, it s like you know some hugely happy moments, some hugely disappointing moments. It s an emotional roller-coaster ride that we have been through. It s something that I don t think anybody can ever experience that. So, for me, going through that phase and he playing for India, reaching the pinnacle was one of the highs of my life. It has given me a lot of confidence and experience taking people forward. So, he has taught me a lot. In his journey, I have learnt a lot as a coach, RX Muralidhar had said during our chat on the sidelines of this year s IPL while discussing Mayank Agarwal s journey in the last few years.

On Monday, a month or so after the IPL 2019 got over, the Bengaluru-based coach could not hide his joy as Mayank earned an ODI call up and that too in India s World Cup squad, replacing injured Vijay Shankar.

(It s a) Dream come true. He has always dreamt of playing in the World Cup. This is a pleasant surprise. (I am) Very elated, the coach tells Cricketcountry before adding, He (Mayank) was thrilled. He was extremely thrilled.

When asked whether the two worked on Mayank s shorter format game after the IPL, the coach says: Not exactly the shorter format of the game. But we were just working on various other aspects. There were a few things that needed to be ironed out. We were working on that part. There was a lot of work that was put in.

There were never any doubts about his strokeplay. Never. But his new-found consistency, more like wherever I go, my runs follow has turned the tide. Somewhere, he shifted gears and the results are there for everyone to see.

After scoring a chunk of runs over the last few years in the domestic cricket and for India A, he earned a much-deserved Test call-up. To his credit, he made the opportunity count, scoring two fifties in as many Tests as India went on to secure a historic Test series win in Australia.

RX Muralidhar highlights where the change has come over the course of these last two or so years.

For us, it was all about mind, the way he thinks because thoughts shape your personality. By influencing our emotions, actions and the habits. Everything starts from there. His whole challenge was his mind and not his skills. This is what we worked on. We see a lot of changes in that and the thought was the one which was challenging him. The question always used to come, Is my technique good enough? Is what I am doing good enough? That kind of stuff, the coach tells Cricketcountry.

So, now he is managing his thoughts much better. That reflects in the way he is playing now. So, yes, this is the major area that we worked on (in the last couple of years). Yes, at the same time, we worked on his skill and technique and now what we are working on is to explore various options to tackle situations, the coach adds.

ALSO READ: I persisted, didn t let go and that worked for me: Mayank Agarwal

While mind was one aspect that the two worked really hard upon, Mayank has done a lot of work on his fitness. And the effects are showing. While it is known how he his long-distance running initially in pursuit to shed weight started helping him control his thoughts, his coach adds more insights into how the much-improved fitness is helping Mayank with his cricket.

Fitness plays a major role. He was fit but now he is fitter (than before). What happens with him is with his fitness is that the sensory shutdown is delayed. So, that s a major major advantage. Like you and me, our senses shut down very early because we are not fit. But with him, he pushes it further. That has played a major role and because you are fit, your decision-making and choice is better and that s what it takes at this level. The difference between a good player and a great player is so small; it is a thin line. The one who is consistently able to make right decisions over a long period of time, he succeeds, says the cricketer s coach.

While RX Muralidhar continues to play a key role in Mayank s journey, the coach himself openly admits that the India A stint under the watchful eyes of Rahul Dravid has been pivotal in the right-hander s rise.

It plays a huge role. Rahul is one of the icons of Indian cricket. He has been one my biggest heroes. So, a good word from Rahul can change the world for any person for that matter. A good word from Rahul has actually made a huge difference. When Rahul comes and says, You re ready. You re ready for India . He (Mayank) was so proud. He said, Wow. You know what, Rahul told me this

So, whoever it is, Rahul Dravid is huge. And such good and positive words coming from him, anybody for that matter, even a lay man could go and play cricket. Such is the effect of Rahul. So, it did make a difference. Everybody seeks his approval. That s huge. That s the kind of man he is, concludes RX Muralidhar. 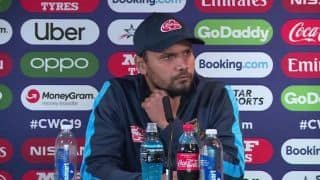