In all likelihood, West Indies are one loss away from missing a semi-final berth.

MANCHESTER: Four games, one win. It’s been a very familiar pattern for the West Indies in the World Cup 2019 so far. What started off as an emphatic result beating Pakistan by seven wickets has become the same old narrative. West Indies shooting on their own foot and squandering chances. Against Bangladesh, it could have been the result West Indies wanted, but playing five pacers summed up the cobwebs in the head.

There have been whispers that perhaps the West Indies have already thrown in the towel. Their practice session was gloomy, players almost going about three hours without much interaction taking place. A day before their match against New Zealand, West Indies had an optional session but did not turn up. Instead, the team went out clay shooting. With one leg already on a return flight back home, this is crunch time for West Indies.

As per reports, there have been a few tough and frank discussions that have taken place inside closed doors. And rightly so. In New Zealand and India, West Indies face two sides that are yet to taste a defeat in the tournament, and in order to beat them, West Indies need to let go their outdated approach, if they are to leave behind the horror of 2018. (ALSO READ: Can beleaguered West Indies rally past red-hot New Zealand?)

Though as of now, it’s pretty much 2018 all over again. West Indies lost to Bangladesh and whatever character they showed against England has vanished. Given, the surfaces in England are nothing like the ones in the Caribbean, but West Indies were expected to take off from their fight against Pakistan, and not skid off the road.

But Jason Holder isn’t someone to give up. The same West Indies captain who admitted that making the final four suddenly believes his team can still do it. The confidence is back, and as is the smile. Then again, when has Holder ever not had a smile on his face? (ALSO READ: West Indies would benefit from learning from Williamson Clive Lloyd)

“I think we still have a possible chance to qualify for the semi-finals, but we’ve just got to take it game by game. This encounter with New Zealand is very important. We all know what’s at stake and we just have to come and bring our A game. It’s as simple as that,” Holder said.

“I think it’s a situation where you’ve had to be tough. We’ve had a few frank discussions within the dressing room to find ways in which we can improve on. I think all teams would get themselves in that situation at some point. But, yeah, we’ve had some pretty good discussions over the last couple of days. And tomorrow is just a day to deliver.”

Like Afghanistan, West Indies too have been at the receiving end of some criticism, the biggest being the lack of fight. But truth be told, West Indies have fought every stop of their campaign. They’ve had performances with both bat and ball. They just haven’t been able to click together, which has prevented them from putting finishing touches. But this is the World Cup; there are no excuses.

“I think the only thing we can do is come and play a solid game of cricket tomorrow against New Zealand. I think there’s been enough talk going around for quite some time. And we’ve just got to play cricket now. I think we’ve done enough talking as a group. It’s just a matter for us to deliver,” said Holder.

“I don’t think the preparation is any fault to what we’ve done. We’ve had solid weeks of preparation. Guys were playing cricket. We had a tour of Ireland. Those who didn’t go to Ireland were still playing cricket in the IPL.”

For Saturday’s game, West Indies will be without Russell, revealed Holder. He played the previous two games on virtually one leg. But bigger than that, West Indies will need to change their five pacers theory. Jason Holder, Shannon Gabriel, Andre Russell, Sheldon Cottrell and Oshane Thomas combined to give away 274 runs, allowing Bangladesh to achieve 322 and leave the West Indies wounded.

“Traditionally here it spins a bit. It’s something that we’ve got back in our minds as well. It could be a possibility that Ashley comes back into the side. But as a group we’ll get together, try to decide what’s the best combination suited for tomorrow’s game,” he said.

“It’s just a situation where we’ve just got to play smarter cricket. We’ve just got to seize the crucial moments in the game. I don’t think we’ve done that well enough here in this tournament so far. I don’t think the ground pretty much would hamper, and I think it’s really a little bit better. We’ve got to be a little bit clearer as to our plans, make sure we make adjustments on any given day if our plan A doesn’t work.”

Plan A, B or C, one loss is what stands between West Indies returning and a last flickering ray of hope to progress. Maybe. 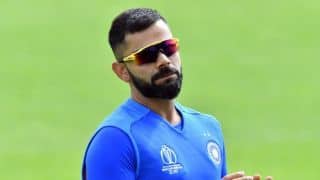