The two Old Trafford's' - the cricket ground and the football stadium are located at either ends of the Warwick Road with an overwhelming history.

MANCHESTER: Two days before India took on Pakistan in Manchester, legspinner Yuzvendra Chahal had uploaded a post on Instagram where he, fellow wristspinner Kuldeep Yadav and allrounder Vijay Shankar posed in front of an iconic backdrop the Alex Ferguson Stand of the Old Trafford football stadium, home of Manchester United, the most popular football club in the world.

The moment my World Cup itinerary was planned, which included four games in Manchester, visiting the Old Trafford for the famous 80-minute long stadium tour was pretty much a foregone conclusion. I’m not your average football follower even though my email ID has the mention of “unitedfc”. I used to watch football during the mid-2000s, when the Invincible Arsenal went 49 and 0 in a stretch. In fact, I was a gunner and, in my room, hung a giant Cesc Fabregas poster. Wayne Rooney was considered a rival and the Thierry Henry vs Ruud van Nistelrooy debate between friends hardly settled. (PS: I had purchased an Henry jersey but would usually be centre-back during the society games)

But as the years rolled on, football was placed on the backburner and interest in cricket grew, to an extent that writing on it became my source of daily bread. And the Premier League well, I could never reconnect with it. But as they say, when in Manchester, visiting the Theatre of Dreams has to be at the top of your agenda. Hence, when I finally decided to get a breather thanks to a three-day gap before the next World Cup game, I decided to see what the fuss was about.

Milton Manchester in Eccles, the place where I’m putting up, United’s home is remotely visible from my room. The Manchester Metrolink, or the tram as they commonly call it, makes the connectivity smoother. Deboarding at Exchange Quay and after walking for 10 minutes, I was there. And believe me, the moment your eyes fixate on that big red Manchester United logo from a distance, you can feel the aura of the venue.

It’s mesmerising. The United Trinity statue, the Busby Memorial, Sir Alex Ferguson Statue and the Munich Clock. Right there is when you realise how this is probably the only football club which has the tendency to even eclipse the sport. ALSO READ: If it’s Manchester, it has to be India vs Pakistan

On enquiring, a polite gentleman at the reception tells me: “Walk towards the North Stand. They conduct a tour almost every half an hour. Tickets shouldn’t be a problem since it is the off season.” There’s a decent audience for the Manchester United stadium tour, roughly 25. The payment is made and off we go.

As we wait for the clock to strike 1230, the museum is where the time is spent. The three enormously huge trophy cabinets, evolution of the jerseys, the years in numbers and some famous quotes from some of United’s larger-than-life players. The one picture I can connect the most to is the class of 1992. It spawned Ryan Giggs, Paul Scholes, Gary Neville and David Beckham, players who wouldn’t just go on to achieve greatness but form pretty much the core of United during the late 1990s and early 2000s. It’s a memory every 90s kid has. United’s museum is where you can relive the greatest football story ever told, visitors able to relive the red’s finest hours and rich past.

The Old Trafford football stadium isn’t the only crowning jewel of Manchester. At the other end of the Warwick Road, roughly a 10-minute walk from United’s home, lies the Emirates Old Trafford, the cricket ground, home of Lancashire County Cricket Club. Between the two Old Trafford’s’ are a plethora of eating joints, most of them United-centric. The one that caught the eye more prominently than the rest was the Trafford Bar, which only operates on United’s match days.

At the moment though, Old Trafford is not about Lancashire or its rich cricketing history. It s about June 16 the big World Cup match with India taking on Pakistan. It is one of the five games the stadium will host, including the first World Cup semi-final. Then again, when has an India-Pakistan World Cup game been bigger than the semi-final or final itself?

For us reporters, the preview day the eve of the match is as occupied as the day of the match. Watching the players practice provides intel, followed by press conferences of the respective captains. For a first-timer at the Old Trafford, finding the entry closest to the nets can be hard, and I not being destiny’s favourite child, accidentally entered through Gate 3, the one that was the farthest.

After some guidance from a couple of staff members of the stadium, I made my way towards the nets, and along the way, came across the celebration of Lancashire cricket. Nothing spectacular. Just the small things. In between the stands are giant posters with some notable faces Akram, Andrew Flintoff, Dominic Cork and Holding. The stadium doesn’t brag of a museum but has an Old Trafford Centre, it s an indoor training facility which is looked after by Gary Yates, a former Lancashire offspinner and a II-team coach.

Along the way, perhaps the most striking feature is a memorial plaque, on which names of former Lancashire players, no longer alive, have been inscribed. Right next to it is a library. I try accessing it but the door is locked.

“You looking for something, young man? If you want to try the library, I suggest you come tomorrow,” says a voice from behind.

“Is there someone I could speak to regarding the stadium?”

“The Stadium? Well, I’ve been with Lancashire for over 40 years. I don’t thing you need to look beyond me.”

Malcolm Lorimer joined the club as a volunteer in 1978 and says he instantly fell in love with its cricket; to an extent that he decided to stick around. For almost a quarter of a century, he has looked after the library and the heritage team and is now the unofficial historian of the club. Truly, I needn’t look beyond him.

Lorimer has been with the club during its peak. Lancashire defeated Worcestershire in the final of the Refuge Cup in 1988. The following year the club won the Sunday League on the last day of the season in 1989 and finished fourth in the championship. In 1990, Lancashire won both the Nat West Trophy and Benson & Hedges Cup finals at Lord’s. This was the first time any county had won both competitions in the same year. It’s been quite an achievement.

However, along the way, the club faced a few hurdles as well. In 2003, the Lancashire Cricket County Club almost went broke. The stadium was in a bad shape and players were starting to leave. Lorimer explains what transpired during that period and how the club survived its darkest hour.

“It’s a remarkable story,” he says. “About 16 years ago, Lancashire were absolutely broke; we had no money. The stadium was in poor condition. Some of the structures were falling down and the old committee structure couldn’t renovate it. We had to do it because we were denied quite a few Test matches.”

“Suddenly, we got a new board in. We borrowed a lot of money. We won a court case, a tremendous case to win, against the club. And the renovation work started. Just see the ground now when India are playing Pakistan. It’s just a World-Class ground now. We even turned the square around.”

Lancashire could have easily left Old Trafford. But it took plenty of efforts from some of the members of the board, mostly its former chairman Mike Kaynes. In order to pull through, the Old Trafford conducted pop concerts, despite objections. Since July 2002, a total of 24 music events have taken place at Old Trafford, artists including Oasis, Bruce Springsteen, Coldplay, Green Day, Bon Jovi, Rihanna and Beyonc .

“We are still 25 million in debt. But with the new stadium and five games of the World Cup taking place, I’m sure the best of Lancashire and Old Trafford is yet to come. As for now, I think we should enjoy India vs Pakistan and see how frenzied the atmosphere gets,” he says.

“By the way, the last time India and Pakistan played at the World Cup, here in 1999, the square was different. Oh wait, but I already told you that, didn t I?”

It’s 1230 and time. Paul, the guide for the tour and an awfully funny guy, lays down ground rules. Fittingly, with a whistle, our tour begins. Through a small tunnel, our first stop in the legendary Sir Alex Ferguson stand, which has about 25000 seats, the most in a stand across the EPL.

The legendary manager’s longevity was honoured in 2011 when Old Trafford’s North Stand was renamed the Sir Alex Ferguson Stand on the 25th anniversary of his appointment. It marked the first time in the club’s history that a stand has been named after an individual. Ferguson had won 37 trophies in his time at United when the club decided to break with tradition. He added another piece of silverware, a 13th league title, before standing down in 2012. To our right is the Stretford End, and in front, Sir Bobby Charlton Stand. Sir Booby is a name I ve heard but that s all. Paul fills us in with knowledge, but I’m just too overwhelmed by the whole atmosphere.

We move to the press conference room, where some of the biggest signings of the club has taken place. As a reporter, I’ve been to a few PCs myself, but this one is different, it’s smaller than your usual PC room with a total of 64 seats. Paul reveals, the signings had to be moved out because of lack of proper accommodation.

Next stop is the renowned Manchester United dressing room, but again, this is different too. Remember the scene from the 2007 semi-hit Bollywood flick Goal, where Boman Irani miserably fails to replicate Tom Hanks’ magnificent portrayal of Jimmy Duggan from the 1992 smash hit A League of Our Own, when he takes a struggling Southall to the Old Trafford hoping for a revival? It’s nothing like it. The dressing room was revamped on the request of former coach Jose Mourinho ahead of the 2018-19 season.

The best bit of the tour was reserved for last the players’ tunnel, from where the footballers enter the field. The group was divided in two teams, one United, and the other well Liverpool. It was because of Paul’s constant jibes towards the other ‘Reds’ that I probably realised how the Liverpool-United rivalry dwarfs the competition between United and Arsenal.

Paul plays the iconic United entrance theme and we make our way out, imagining what it would feel like to appear in front of 70000-odd people screaming their lungs out but having absolutely no idea how the last 80 minutes had flown by. 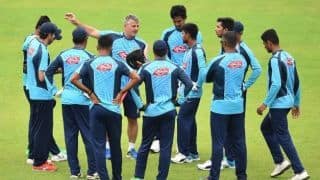