World Cup diary: If it's Manchester, it has to be India vs Pakistan

World Cup diary: If it's Manchester, it has to be India vs Pakistan
By Aditya Bhattacharya

MANCHESTER: When the World Cup schedule first came out, fans from both India and Pakistan checked for one game in particular. India vs Pakistan; when was the marquee clash? June 16 was marked first of all. June 16 tickets sold out first of all. They were still selling a day before the game, if you were lucky and if you could shell out big sums of money. For the first time in 20 years, India vs Pakistan returned to England. In Manchester. At the World Cup.

Due to the overwhelmingly big numbers of British Indians/Asians residing in Manchester, the city feels like mini-India. The number of Indian restaurants on the way to Old Trafford makes you wonder if it s indeed the Manchester Metro Link you re travelling in or it s just another ride in the Delhi metro. Besides, the number of India fans turning up makes you feel nothing like England. You have the pleasant weather which makes things easy, but with the effect it has had in the World Cup, rain is everybody s enemy.

Eccles, the place I m staying at, is roughly a 20-minute tram ride from Old Trafford, including a changeover. As expected, it is filled with Indian supporters, some of them running late. Among them, is Raj Malhotra, (no, not a Shahrukh Khan fan) and his family, who have flown all the way from Mumbai to watch India vs Pakistan. His favourite cricketer, mind you, is Babar Azam, and he of all is whom Raj desires to watch bat the most.

I just hope Pakistan do not bat first. I don t want to miss seeing Babar bat. Virat obviously is the best batsman in the world, but Babar comes really close to it. Have you seen his average? It s above 50, exclaims Raj, almost completely unaware that Imam Ul Haq and Fakhar Zaman average over 50 too.

We ll get there, I tell him. It s just a couple of stops away. Plus, the stadium is right where the exit is. We then walk towards the stadium. As expected, there is madness around the entrance. Raj begins to panic but I go my way to shoot some videos and photos showcasing the euphoria of the match. After almost 20 minutes and approximately 4 gigabytes of video recording later, I approach the media entrance, where I spot Raj, his wife and his kid cluelessly searching their entry gate. 5B it says, which is right next to 3C, from where the media is supposed to enter.

But by the time we finally locate it, the rush has gotten maddening and the toss has taken place. Pakistan are bowling first. At least Raj is glad he won t miss watching Babar bat. Yet, with the kid, it s tough to get through the massive crowd. I try and talk the guard who scans the accreditation into letting the family in. The guard agrees and Raj and I go our separate ways.

“God bless you, brother. Praying for a Babar hundred and an India win,” Raj says as he heads towards his stand.

It s the most bizarre case of “loyalties divided” I ve come across.

Milton Manchester is my home for the next 14 days. It s a huge 12-storied hotel, but one located literally walking distance from the Eccles Railway Station. On the day of my arrival, I had some issues connecting with the Wi-Fi so I was moved into a different room.

“You are lucky sir,” the receptionist says. “For tomorrow, we have 27 reservations, and I can t help but think that it s for the India-Pakistan game on Sunday. I think 27 is a record for us. We ve never had so many reservations on one day ever since we established.”

He was right. On the day of the game, at the hotel restaurant which serves lip-smacking English breakfast bacon, pork sausages, hash brown and some baked beans I spot at least 11 tables on which people in India jerseys are seated. Some are carrying flags, but most are waiting to get their faces painted at the ground. Among them are a bunch of 30-something year-old friends, enjoying their meal.

“Are you with the media?” one of them asks me. “Yes, sir,” pat comes my reply, eager while I search for a table to sit on. “Wow, you must have perks. Your media centre will protect you from the rain, which might be on the horizon. ”

This is Shyam, with a few of his friends. Seated next to him are three college friends from University of Leeds, batch of 2010. This bunch was longing for a reunion. And it s India vs Pakistan that has got them together, for the first time since the 2015 World Cup. Shyam is from London, with his friends, Harish and Ahmed from Cardiff and. Another friend, Runa Mehta, sporting a tri-colour top, has joined them from Leicester, while a few more, from Manchester itself, are on their way to the stadium. This bunch of friends come together everytime India and Pakistan play in an ICC tournament as part of a pact they made years ago.

For Ahmed this is the first-ever World Cup game he is attending, whereas Shyam was present for perhaps the best India-Pakistan World Cup game ever played.

“I live here now. The most memorable India-Pakistan game I went to was in 2003 the Centurion game. Sachin produced a snice show and I’m hoping for a similar performance from Virat today,” he says. “I really hope it doesn’t get rained off. It’s very typical of the UK weather, unfortunately. But yeah, looking forward to seeing some good batting. Statistically, we will hopefully beat Pakistan. They’re so unpredictable.”

Right on the adjacent row are three middle-aged men, probably in their early 40s. The three are co-brothers, married to three sisters, who seem content in their own space.

Dilip, Shashi and Ravi are based out of London from the last 24 years. Originally, Dilip and Shashi are from Coimbatore, while Ravi hails from Manipal. Growing up, neither Dilip or Shashi had any interest in cricket. But Ravi has been following cricket since the 1987 World Cup. Ravi, astonishingly, has not missed a single India-Pakistan World Cup game.

“During the 1992 World Cup, my father planned a trip to Australia. He did it in a way that it clashed with the World Cup,” Ravi says. “That was the first India-Pakistan match I ever saw. And since, have never missed. The best game in my memory was the 1996 game, since there was so much of a political upheaval going on in India. All the roads let to the Chinnaswamy that day. What belligerent hitting from Jadeja! This Jaddu is fine and all, but Ajay will always remain my favourite Jadeja.

Dilip then adds to the discussion: “In fact, it was on Ravi’s insistence that the three of us are tracking India in this World Cup. We were there in Southampton and at the Oval. It was my strategic planning to miss the New Zealand game in Nottingham because I was sure it would get washed out.”

Weren’t they concerned about the rain threat in Manchester?

“Following for 15 days now; everyday it changes. The latest one is between 1 to 2pm, that is about 40 percent-50 percent rain. It may be passing showers and then we have another one coming between 4 to 5. If we dodge those, we should have a reasonable game,” he says.

“I mean one of the things everybody coming from India ask: They don t cover the whole field? No they only cover the square. They don t understand that the drainage system here is far more superior to that in India. The last to change the drainage was Lord s a few years back. The drainage is amazing; it is usually very good. If it doesn’t pelt down, we shouldn’t have a problem. Worst case scenario may be a 40-over innings in the second innings.”

As I finalise this draft, we’re into the innings break. And I would want to laud Ravi for his spot-on prediction. 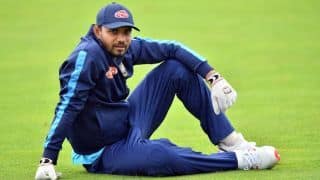 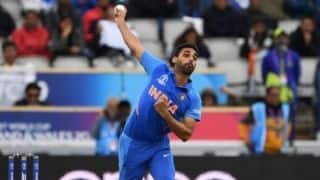