In the second game, Match No. 36 of ICC WCL Championship, there will once again be a few individual clashes within the main clash. Let us take a look at some of the likely clashes.

Nepal and Kenya will take on each other in second and final ICC World Cricket League (WCL) Championship fixture at the Tribhuvan University (TU) International Cricket Ground in Kirtipur, near Kathmandu on Monday, March 13. The first match on Saturday was won by Kenya by 5 wickets (D/L method). The 50-over match will be a part of Kenya s two-match trip to the tiny Himalayan nation for the ICC WCL Championship. Before this short trip, the two countries played some warm up matches in India. While Nepal were involved in practice games at Delhi, Kenya also played a few games against the sides like Gujarat State Fertilizers Company (GSFC) and Baroda Cricket Association Under-23 side in Gujarat, India. ALSO READ: Nepal vs Kenya, Preview: Hosts seek redemption at home ground

The matches are a part of the tournament which is being played in double round-robin format and has eight teams participating in it. At the moment, Nepal stand sixth in the ICC WCL standings with six points from three wins after playing nine matches. Kenya, on the other hand, are one spot ahead of Nepal in the standings with 10 points. They have won five and lost four matches. Standings notwithstanding, the two teams are likely to play some fiercely competitive cricket, as was visible in the first match. Though Kenya won it by 5 wickets, it was much closer than what the scorecard suggests.

In the second game, Match No. 36 of ICC WCL Championship, there will once again be a few individual clashes within the main clash. Let us take a look at some of the likely clashes:

Gyandendra Malla vs Nehmiah Odhiambo: Star batsman Gynendra Malla came into the match on the back of a hundred in the practice match in India. At the last minute, he found himself in the thick of things, as he had to lead Nepal in the absence of regular captain Paras Khadka who had a niggle. The captaincy pressure notwithstanding, Malla struck a fluent 35-ball 27, which had 5 hits to the fence. Things were looking good till he was out there, but his wicket triggered a collapse. Kenyan speedster Nehmiah Odhiambo, one of the most experience players of his side with 86 international wickets under his belt, cleaned him up. Malla will have a score to settle against Nemiah in the second game, and that makes this duel interesting.

Dipendra Airee vs Shem Ngoche: 17-year-old Dipendra Airee made his List A debut in the last game and was the second highest scorer after Malla. He took 56-balls for his 19 and tried holding the innings till a point. But his resistance was eventually ended by left-arm spinner Shem Ngoche, who was the pick of the Kenyan bowlers with his spell of 6-1-18-3. Ngoche will once again look to use all his experience and the variations up his sleeves to keep the young Nepali under check. How Airee aims to counter his threat will be interesting to see. That makes the contest mouth-watering.

Collins Obuya vs Sandeep Lamichhane: Collins Obuya is the most experienced player of this Kenyan squad. He was a part of Kenya s dream run to the semi-final of ICC Cricket World Cup 2003 and also the Man of the Match in his side s shock win over Sri Lanka with figures of 5 for 24. The all-rounder now plays primarily as a batsman in this team. Batting at No. 4, his 24 runs helped Kenya get home in a tensed chase. Obuya was dismissed by Sandeep Lamichhane, the exciting young leg-spinner. The 16-year old spinner is already a highly rated cricketer, with former Australian captain Michael Clarke vouching for his abilities and even arranging for him to train Down Under. Round 1 went to Lamicchane, and now it will be interesting to see how these two players fare against each other on Monday in Round 2.

Sagar Pun vs Rakep Patel: Though Sagar Pun had an ordinary outing with the bat, he made up for it with the ball with figures of 5-1-8-2. The off-spinner was in fact on a hat-trick at one stage. Though he did not get much time in the middle against the Kenyan captain Rakep Patel, who saw his side home with his unbeaten 34 off 52 balls, a clash between the two will be eye-catching. 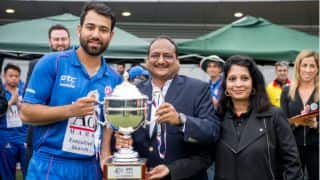