The second highest run-scorer in ODI cricket, Mithali Raj now needs only 211 runs to pass Charlotte Edwards record of 5,992 runs. England has been a happy hunting ground for her. In 29 matches in England, she has scored 940 runs at an average of 44.76.

After close to six months away from the game, Smriti Mandhana returns to the international circuit having recovered from a knee injury that she had suffered while playing in the Women s Big Bash League in January. Mandhana replaces her Maharashtra state-mate, Devika Vaidya, who had sustained a shoulder injury during the Quadrangular series, as the only change to the squad that travelled to South Africa.

The left-hander s return adds to India s problem, for they already have Deepti Sharma, Punam Raut and Mona Meshram already in the fray for the opener s slot. It is likely that three of the four will feature in the starting XI, with one slotting into the middle order.

Mithali Raj will lead India in the eleventh edition of the ICC Women s World Cup to be held in England. She is the lynchpin of the Indian batting line up and will be aided in the middle order by Harmanpreet Kaur, Veda Krishnamurthy and the all-round skills of Shikha Pandey and Jhulan Goswami.

Sushma Verma and Nuzhat Parween have been entrusted with wicket-keeping duties. Neither has played in England before, so it will be interesting to see how they cope to the conditions. Since spin has always been India s main weapon, the wicketkeepers will play a major role in the tournament. Verma, who has shown flashes of brilliance between ordinary misses, is likely to be India s first choice with the gloves.

India will go into the World Cup with only three genuine seam options in Goswami, Pandey and Mansi Joshi. Considering that conditions in England are likely to assist the fast bowlers, India may be one pacer short, but Raj is convinced that India are right to back the spin quartet of Ekta Bisht, Rajeshwari Gayakwad, Poonam Yadav and Sharma even in alien conditions.

“Honestly everybody prefers to have extra fast bowlers in the side. But India have always banked on spinners, irrespective of the wicket. Whether in Australia, South Africa (or elsewhere), spinners have done exceptionally well,” Raj told reporters in Mumbai on the eve of the team’s departure.

India will go into the 2017 World Cup riding high on the confidence after a series of impressive results. Their 16-match winning streak, which was broken by South Africa in May, would have instilled the young side with a great deal of belief that should help their performances in the mega event.

India have taken part in eight of the ten World Cups so far, having missed the tournament in 1973 and 1978. Their 52 per cent win (of 54 matches) indicates to a middling record in World Cups something they will be looking to improve on.

While appearances in the final four became quite a commonplace for India, their best result came in 2005: they reached the final of the tournament held in South Africa, stumbling against Australia at the last hurdle. They backed up that performance with a third-place finish in 2009, but had a miserable outing in 2013, managing only 2 wins of four matches to finish at the seventh place.

India s form in ODIs over the past 18 months has been stupendous. Raj s team has won 17 of their last 20 ODIs, including four consecutive series. They beat Sri Lanka (3-0) in February 2016 and West Indies (3-0) in November the same year. Then they won the ICC Women s World Cup Qualifiers in Sri Lanka this February and the Women s Quadrangular series in South Africa in May.

Sharma and Raut were involved in a record-breaking 320-run opening stand against Ireland in May, the former smashing a mammoth 188 the second highest individual score in women s ODIs.

Having beaten Australia in the final ODI of their away series in February last year, India went on a 16-match winning streak that ended at the hands of South Africa during the Quadrangular series. The streak, though, allowed a young Indian squad to learn the art of winning and go into the World Cup with confidence. The likes of Sharma (678 runs and 23 wickets in 17 matches), Pandey (28 wickets in 17 matches), Gayakwad (26 wickets in 13 matches), Yadav (14 wickets in 9 matches) and Krishnamurthy (301 runs in 18 matches) gained more experience at the international level and strengthened their positions in the squad, while Raut (296 runs in 7 matches) and Meshram (271 runs in 11 matches) made full use of their opportunities to resurrect their international careers.

India s bowling attack has traditionally been its greatest strength. While the batting has in the past often been carried by one or two individuals, the bowling unit has almost always been strong enough to challenge the best teams.

As is the case with all subcontinent teams, spin is India s favorite weapon. The spin quartet of Bisht, Gayakwad, Sharma and Yadav has taken 88 wickets between them in India s last 20 matches. Not only do they provide the bowling attack with variety, but they also give Raj a sense of control.

Bisht, the most experienced of the lot with 40 ODIs under her belt, has been India s go-to bowler for a fair few years now. She has often bowled in difficult situations and found a way to give India the upper hand. The diminutive left-arm spinner thrives under pressure and is effective with both new and old ball.

Gayakwad, also a left-arm spinner but very different in style, has been one of India s best ODI bowlers in the last year. With an economy rate of 3.24, she clearly has the ability to choke opposition batters and force them into making a mistake.

Yadav, the loopy leg-spinner from Uttar Pradesh, is the most attacking option of the four spinners. Like all leg-spinners she may go for a few runs, but always picks up wickets. She gives the batters very little pace to work with and has now added a googly to her armoury.

Sharma, an off-spinner and the only member of the spin contingent who brings the ball into the right-handers, has grown leaps and bounds since her international debut in 2014. She has a classical action; she flights the ball nicely and attempts to deceive the batters in the air. The 19-year-old often aims to simply bowl as many dot balls as she can and earns her wickets in the process.

With four genuine spin options in the squad, India has a legion of problem. Which ones they will choose to be part of the starting XI will be interesting, but whoever gets the nod, India will be confident that they have the ability to deliver under pressure.

For as long as one can remember, Mithali Raj has been India s mainstay in the batting order. She has often had to play the anchor role, ignoring her more attacking instincts, to make sure she bats India to a competitive total. In the past two years though, with the rise of Kaur, Krishnamurthy and Mandhana, much of the pressure on Raj has reduced, and she has been allowed to express herself. In her last 20 ODIs, Raj has scored 671 runs at an astounding average of 111.83.

The second highest run-scorer in ODI cricket, Raj now needs only 211 runs to pass Charlotte Edwards record of 5,992 runs. England has been a happy hunting ground for her. In 29 matches in England, she has scored 940 runs at an average of 44.76.

Raj is a one of the few old-school, classical batters left in the international circuit. Her ability to pick length quickly makes it seem like she has all the time in the world to play even the fastest bowlers. She picks gaps with surgical precision and often peppers the cover-point boundary with her signature drives off the front foot.

In her fifth World Cup and her third as captain, Raj will be hoping to inspire India to greater heights. She has seen the team through some difficult times and certainly deserves her moment in the sun.

Ekta Bisht is easy to miss on the cricket field. She is thin, short and usually flies under the radar. She does not seek the spotlight, but is always India s best player under pressure. She loves a fight and will never back away, which is why Raj has used her as India s mainstay bowler whenever the going gets tough.

Bisht is not a classical left-arm spinner. She has a slightly round-arm action, which means the ball rarely turns away from the right-hander. The 31-year old, though, does not let this deter her. She uses changes of pace and angle to deceive the batters, always one step ahead of them.

Bisht has taken 62 wickets in 42 ODIs at an average of 19.53 and an economy rate of 3.34. She is an extremely important member of the Indian bowling attack, the second most experienced bowler behind Goswami. Her contributions will be vital to India s campaign.

Sharma s performances since her elevation to the top of the order against West Indies last November have been exceptional with both bat and ball. By the breadth of a hair though, it is Smriti Mandhana who is CricketCountry s choice as India s player to watch.

Since her ODI debut in 2013, Mandhana has become a vital cog in the Indian batting line-up. In 23 ODIs, the left-hander has scored 701 runs including 1 century and 5 half-centuries. During India s tour of England in 2014, still only 18, Mandhana scored a match-winning 51 in India s famous victory in the Test match Wormsley, followed by 106 runs in the 2 completed ODIs.

Mandhana has been one of India s best batters in overseas conditions mainly because of her excellent play off the back foot. She is quick to judge length and pounces on anything within her range. She plays exquisite punches through the off-side and has an interesting shovel pull between mid-wicket and square-leg. What sets Mandhana apart from the other Indian openers is that she is not afraid to take the attack to the bowlers.

If she succeeds in getting India off to brisk starts at the top of the order, it will hold the team in good stead throughout the tournament.

In an interaction with the media just before her team departed for England, Raj suggested the Indian team s first aim was to reach the semi-finals of the tournament. Considering India s recent form that is, by no means, an unrealistic goal.

The Quadrangular Series was very good preparation in terms of gaining confidence and sorting out the composition of the team, but we can t really depend on past glory, said Raj. The conditions there (South Africa) are completely different to what we are facing here in England. We can take a lot of confidence, but we need to start fresh again in the World Cup.

We definitely want to win the World Cup, she added. It is a great platform to show the kind of cricket the girls have been playing for the past couple of years. Our first target, though, will be to reach the semi-finals, and for that you need to be able to play good cricket throughout the tournament and have good momentum.

Considering that all of India s recent victories have come against lower-ranked teams, the World Cup will be their first real test against the more established sides. Over the last few months the team has gained experience and confidence, and learnt to win without relying too heavily on the senior duo of Raj and Goswami. The young players have stepped up to the plate and shown that they have the ability to tackle the best in the world. 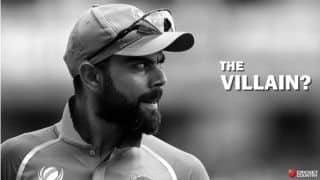