The Pakistan women s side does not need to go far to find inspiration ahead of the ICC Women s World Cup 2017.

The Pakistan women s side does not need to go far to find inspiration ahead of the ICC Women s World Cup 2017. The men s team led by Sarfraz Ahmed has shown it the way, proving how predictions can go for a toss with a few stimulating performances. Sarfraz s team pulled off one of the most astonishing sporting triumphs in history. It rose from the depths of despair to produce a spellbinding performance that has given a great high to the entire country. Now the focus is on the Women in Green. While the competition is stiff, I have a feeling that Sana Mir s side will make its mark in the championship. ICC Women s World Cup 2017 going to be biggest and best yet

I hear that the PCB has taken good care of the side by handing out central contracts, giving many young girls a career in sports in Pakistan, perhaps for the first time ever. That is definitely a step in the right direction and augurs well for women s cricket in the country. Meanwhile, Sana has done a wonderful job as an astute and intelligent leader. She has left a lasting impression on the game and has been the most recognised female cricketer in the country for a long time. The all-rounder has to, I feel, lead from the front just as Sarfraz did for the men s team during the sensational ICC Champions Trophy campaign.

Pakistan has done well against regional rivals India, Sri Lanka and Bangladesh, but as always, its biggest test would be against women cricket powerhouses Australia, England, New Zealand and the West Indies. With Bangladesh not featuring in the tournament, Pakistan would have to make its games against India and Sri Lanka count. The team must beat these two oppositions besides upsetting at least two among the leading teams to stand a fair chance of booking a last-four spot. Shane Bond: Women’s cricket in pursuit of attaining new highs

On paper, the task seems improbable considering Pakistan s lackluster record against the leading women s teams. However, just like the men s team, we shouldn t count them out yet. I have heard that the team worked hard on improving skills with different camps held across the country as well as in England during the lead up to the tournament.

The players have been given adequate time to acclimatise to the conditions and weather expected at their three venues – Taunton, Derby and Leicester. I really hope that the practice and training sessions besides the warm-up games help the team prepare adequately for the stiff challenge that it faces. My advice to the team would be similar to the one that I gave to the men s team – the players must play fearless cricket and shouldn t be worried about defeat. Any negative thoughts can hamper their skills too hence a positive attitude is imperative for success. Women s World Cup 2017: England confident of a good show at home

Besides Sana, I hope senior players like Nain Abidi, Bismah Maroof, Javeria Wadood and Asmavia Iqbal rise to the occasion and deliver for the team. The quartet is experienced and has delivered match-winning performances in the past. If Pakistan is to make its presence felt in the tournament, these senior players would need to take the bull by the horns.

There are some fresh faces too in the squad and I hope that they aren t overawed by the occasion and play their cricket with an exuberance of youth and the passion needed to make a name at a global event. Finally, I want to wish the ICC the very best for the event. Women s cricket needs to be pushed further in member countries around the world. For that, a competitive ICC Women s World Cup is paramount. The players plying their trade at the tournament are set to be role models for the future generation of girls and I hope that we see an enthralling event that further raises the standard of the game. 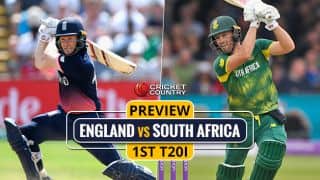