England s Anya Shrubsole s 6-for dismantled India in the ICC World Cup 2017 final. Or, India chose to implode under pressure, handing England a 9-run win. Where did India go wrong? Or let s put is as where India could have done better strategically. Suvajit Mustafi analyses.

Toss: One can t really blame anyone for this, but the toss was crucial in the final. India s key to success throughout the tournament has been to put runs on the board and defend. Once Mithali Raj called it wrong the balance tilted in favour of the hosts.

Variety in bowling: Jhulan Goswami made it count with her experience. There wasn t much bounce or movement as such but she bowled with nagging accuracy. Her fellow pacer Shikha Pandey erred in line and was severely punished. In Rajeshwari Gayakwad, Poonam Yadav, Deepti Sharma and Harmanpreet Kaur, India had spinners and there wasn t too much of variety.

Sarah Taylor and Natalie Sciver had a merry time in the middle overs piling up 83 before Jhulan came in for her second spell and struck those crucial blows.

Risk in death overs: It will be too harsh to blame Mithali for this. However, in hindsight, this was a key contributor to the loss. Shikha wasn t at her best, which forced Mithali to bowl Harmanpreet as the sixth bowler. Harmanpreet had bowled 4 expensive overs. This meant Shikha had to complete her 6.

Shikha bowled his sixth over, which was the 46th of the innings. She impressed with giving away just 4. Mithali was tempted to go with her for the 48th over as well. The over went for 4 1 0 1 2nb 1 4 in other words, 14 runs. India lost by 9 runs. More importantly, this meant Deepti hadn t completed her quota and finished with 9-0-39-0.

Underutilising Deepti: With due respect to Smriti Mandhana s exploits early in the tournament, I truly feel she should have been pushed down the order in bid to unite Punam Raut and Deepti at the top. Not long back, the duo scripted a world-record opening stand. Despite Deepti s notoriety with slow batting, she holds the record of being the second-highest individual run-getter in women s cricket. It was only in May that she had slammed that 188.

Smriti before Sunday s duck had string of scores: 6, 13, 3, 4, 8 and 2. She had done little of note since her century against West Indies. A change could have worked for her. It could have solidified India s opening at the same time.

43 for 2 in the 13th over. England had begun sniffing the metal.

The suicide mission: Harmanpreet would have sealed it for India. However, her slog sweep found Tammy Beaumont at deep square-leg. That sent jitters down the Indian camp. But calm down. Out walked Veda Krishnamurthy. Her exploits against New Zealand were still fresh in minds. On a slowish surface, she was brilliant with her extra-cover lofts and drives but in between there were some absurd attempts of cuts from middle and leg.

It was reminiscent of a valiant Jon Snow slaughtering wildlings at the edge of the wall. The nation had their heart in their mouth.

Anya Shrubsole turned it around. Or rather India crumbled. Punam fell. Keep calm. There was Sushma Verma. She was gone too. Okay. There was Deepti. She could get the singles, Veda could strike the odd boundary and it was still India s game to lose.

Veda, who looked fluent in off-side, attempted slog sweeps for no apparent reason. I told my dad, Deepti is a better batter. All Veda needs are singles. With these slogs, they are setting her up. She should calm down.

I felt like a prophet when Veda perished exactly the same way. My heart sank when Jhulan followed next.

Shikha s misgivings with ball would have been forgiven. She had chance to make amends. She and Deepti brought in some sanity in the chase. The next 15 balls saw 17 risk-free runs being added.

Then the basics flouted. Shikha got a rank bad delivery. She could have smacked it through the gap past point. She hit it to Anya. Worse, she sprinted for a run. That run out was the final nail. Steven Smith would have called it a brain-fade moment.

India s running between the wickets cut a sorry picture.

England s fielding despite the two dropped chances and a stumping missed, made 228 look 270 at least.

India lost to pressure by 9 runs. England lifted the cup.

Everybody was very nervous and I think that resulted in our defeat, Mithali summed it up. No explanation could have been as apt. 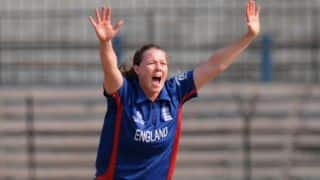