Pakistan collapsed to a meagre 132 in the final, leading to an 8-wicket win for Australia.

After the humdinger at Edgbaston three days back, the world expected one heck of a contest on June 20, 1999. Abhishek Mukherjee looks at the damp squib at Lord’s that provided an anticlimax to end the World Cup.

With South Africa out of the way, Pakistan had every right to hope for the World Cup. They had steamrolled over New Zealand in the semifinal at Old Trafford, while Australia had just about managed to sneak through to the final after Edgbaston had possibly witnessed the greatest One-Day International (ODI) of all time.

Pakistan had also beaten Australia in the league match at Headingley less than a month back. They were also the first Asian team to reach the World Cup final twice, and no Asian side had lost a World Cup final till then.

Pakistan’s hopes rested on their superlative bowling attack — one that was strong enough to leave Waqar Younis on the sidelines; one might argue that the move (they preferred to go in with three all-rounders in Abdul Razzaq, Azhar Mahmood, and Shahid Afridi) might have been a blunder, but it had worked for them throughout the tournament; and in the end, it did not matter in the final.

The problem lay in the batting, despite Saeed Anwar scoring back-to-back hundreds going into the final. Pakistan sorely missed the services of an in-form Yousuf Youhana; neither Inzamam-ul-Haq nor Ijaz Ahmed was in good nick, and though Razzaq put up a couple of gritty performances up the order and Moin Khan played a few cameos down the order, batting remained a concern, despite the fact that they batted deep enough to have Wasim Akram at nine.

Australia, on the other hand, had their backs to the wall at one stage following consecutive defeats against New Zealand and Pakistan. At one stage they required to remain undefeated for 7 matches on the trot to lift the World Cup, and they had managed 6. They had one more hurdle to cross.

It rained in the morning, and play did not start till 11.15. Wasim won the toss amidst great cheer from the partisan crowd and decided to bat. Was it because he trusted his bowlers more than his batsmen? Of course, Steve Waugh later admitted it was a 260-pitch, and Anwar began in style, cutting Glenn McGrath’s third ball for four.

Damien Fleming had a wayward second over, bowling two wides and two no-balls; Anwar also flicked and drove him for two fours. With 14 from the over, Pakistan’s score raced to 21 without loss after 4 overs. For a moment it seemed Wasim’s decision had paid off.

Then McGrath struck, though it will only be fair to give the credit to Mark Waugh. Poor Wajahatullah Wasti saw a human being at second slip and tried to steer one from McGrath past him; “Junior” flew flung himself (at one stage he was parallel to the ground, all four limbs in mid-air) and plucked it out of thin air with both hands. It was the kind of catch that lifts teams, and this was no exception.

Once again Wasim promoted Razzaq, and as the over came to an end, Anwar called for a new grip for his bat. Once everything got going, Fleming came on round the wicket, brought one slightly in, and found Anwar’s edge. The ball crashed into off and middle: 21 for 2.

Razzaq and Ijaz saw the new ball through, but Paul Reiffel and Tom Moody kept the pressure on. Then Razzaq, probably out of desperation, lofted Reiffel, and McGrath dropped an easy catch at long-off. He did not exactly drop the World Cup, as Razzaq soon hit Moody to cover, and Steve Waugh took a good, low catch. After 23 overs the score read 77 for 3.

Warne strode in. Beneath the handsome looks there lay a deceptive aggression; the walk was minimal, the eyes transfixed on the batsmen, the brain racing beyond fathomable limits for the mere mortal. The first ball of the 24th over moved across Ijaz, beating his outside edge. Ijaz blocked the next two, but one could always sense something was brewing.

The fourth ball pitched on leg; Ijaz, transfixed, almost hypnotised, remained struck on the crease; the ball spun across the defensive prod and hit off-stump at an astonishing pace; and Warne celebrated. If one ball defined the final, this had to be it. As a forlorn Ijaz walked back to the pavilion, the Pakistani hearts started sinking.

The second ball Moin faced flew past second slip. He had an edge soon afterwards, and Steve Bucknor, ruled him caught-behind. Afridi began in characteristic style with a hoick over wide mid-on for four, and Pakistan crawled to the 100-mark in the 29th over.

Then Inzamam poked at one outside off from Reiffel, and David Shepherd ruled him caught-behind — though replays did not reveal an edge. Afridi raised some hope with another boundary, this time cutting a wide one from Warne, albeit in the air; three balls later he tried to sweep a full one, missed the line completely, and was ruled leg-before.

Wasim decided to take the bull by the horns and slog-swept Warne for six. Waugh brought McGrath back, and Mahmood immediately drove him through the cover for four. Unfortunately, as Waugh replaced McGrath with Moody, Mahmood hit one back to him, and that was that.

Wasim tried an encore of the previous shot, but did not get the elevation this time, only managing to find mid-wicket. McGrath wrapped things up by having Saqlain Mushtaq caught brilliantly off a lifter by Ricky Ponting at third slip. Let alone 50, Pakistan were bowled out an over short of the 40-over mark — for a paltry 132.

Warne finished with figures of 9-1-33-4 to follow his 10-4-29-4 in the semifinal, which took his series tally to 20 wickets; he would finish as the joint-highest wicket-taker along with Geoff Allott. The stage was set for the Australian batsmen, but a small glimmer of hope lay ahead of the Pakistanis: two years before the final they had successfully defended 149 against the same opposition at Hobart. Could they pull off an encore?

Despite the presence of ODI legends like Wasim and Saqlain in the side, Pakistan’s biggest hope was probably Shoaib Akhtar; he had, after all, knocked the wind out of New Zealand in only the previous match. Unfortunately, Adam Gilchrist cut loose before Wasim could settle down, smashing two boundaries in Wasim’s second over. Not to lose out on the contest, Mark Waugh flicked Shoaib and cover-drove Wasim for fours.

The demolition continued. Gilchrist uppercut Shoaib for six and on-drove the next ball for four more; Wasim lost his radar, sending down a wide and a no-ball and conceding another boundary, and after Australia reached 49 without loss in 7 overs, Wasim replaced Shoaib and himself with Razzaq and Mahmood.

The onslaught did not stop. Gilchrist hit 4 boundaries in the next 3 overs to bring up his fifty in 33 balls. With the score on 75 after 10 overs, a desperate Wasim turned to Saqlain. Gilchrist’s innings came to an end as he drove to Inzamam (who somehow managed to injure himself while taking an easy catch) at mid-off, but his 49-ball 54 had already knocked Pakistan out of the match.

Wasim brought Shoaib back immediately, but this time Ponting went after him, taking him for successive fours. An exasperated Wasim brought himself on, and eventually removed Ponting as he fished outside off, only to edge one to Moin. Australia needed a mere 21.

Darren Lehmann cut Wasim for four off the third ball of the 20th over, and Mark Waugh helped Australia reach 129 two balls later. Saqlain dropped the first ball of the next over short, and Lehmann cut it ferociously to give Australia their second World Cup title, their first in 12 years.

As the forlorn Pakistani supporters left the ground, the Australian supporters (none more than the man in yellow-and-green brandishing the AUSSIE AUSSIE AUSSIE OI OI OI banner) celebrated in joy; Lehmann and Waugh grabbed the stumps; and a legacy that lasted over a decade began.

Steve Waugh joined Clive Lloyd, Andy Roberts, Viv Richards, Gordon Greenidge, Alvin Kallicharran, and Deryck Murray as the only ones to win the World Cup twice, though Moody was also a part of the 1987 team that won the World Cup. The record is currently held by Ponting, McGrath, and Gilchrist (thrice each).

Geoff Marsh became the first to win the World Cup as both player and coach, while Shane Warne joined Mohinder Amarnath (1983) and Aravinda de Silva (1996) to become the third cricketer to become Man of the Match in the semifinal and final of the same World Cup.

– Australia lifted the next two World Cups as well. They remained unbeaten for 34 World Cup matches till their defeat on March 19, 2011 against — you have guessed it right — Pakistan.

– Gilchrist played in only three World Cup finals, scored 54, 57, and 149 in them, and ended up on the winning side on all occasions.

– Lehmann provided the final touch to the 2003 tournament as well, by catching Zaheer Khan.

– Pakistan became the first Asian side to lose a World Cup final. Surprisingly, following their defeat, the only Asian sides have come second in World Cups.

Man of the Match: Shane Warne.
Man of the Series: Lance Klusener. 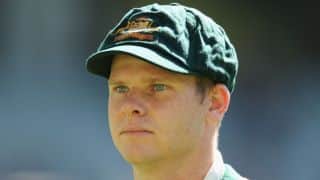