Guided by Muttiah Muralitharan and Chaminda Vaas, Sri Lanka had South Africa s back to the wall at Northampton on May 19, 1999. Then they ran into Lance Klusener. Abhishek Mukherjee looks back at one of the most violent rearguard actions in World Cup history.

South Africa were not supposed to win the match. In fact, no side is supposed to win an ODI after being reduced to 122 for 8 in the 35th over and both Chaminda Vaas and Muttiah Muralitharan on a rampage. All Lance Klusener had with him that day were Steve Elworthy and Allan Donald: he did not need anyone else.

Arjuna Ranatunga put South Africa in under overcast conditions in Northampton. Gary Kirsten hit the first three balls of the second over of Pramodya Wickramasinghe for fours, but Vaas bowled him off his inside edge the following over. Vaas also had Herschelle Gibbs fishing outside off-stump. When Mark Boucher, promoted to first-down, was bowled by Wickramasinghe 3 balls later, the score read a miserable 24 for 3 in 6.3 overs. Arjuna s decision seemed to be spot on.

The resurrection started with Jacques Kallis, who played the anchor role, while Daryll Cullinan got into his strokes. Ranatunga had only two seamers, which was probably a blunder in hindsight; as Mahela Jayawardene came on to bowl his medium-pacers, the pressure came off the South Africans.

Wickramasinghe, bowling his eighth over on the trot, eventually found Kallis edge. Ranatunga introduced Murali, and Hansie Cronje flicked one to Mahela at deep square-leg; trying for the second run, he fell short of the crease. Jonty Rhodes hit a couple of boundaries, but his edge went for a catch at the 45 .

Shaun Pollock drove one off Murali hard; it hit the shin of Arjuna, standing at silly point, and flew to Murali, who completed the catch. Steve Dunne and Steve Bucknor discussed for long, but had no option but to refer to Ken Palmer. Multiple television viewings clearly showed that the ball had bumped.

Surprisingly, the red light came on, and Palmer ruled Pollock out, caught and bowled. The incident left a sour taste. Klusener was certainly not amused when he walked out. Cullinan, 49, tried to clear the fence off Murali; Vaas, running back at long-off, held on to the ball for a while, and threw it back to the field as he toppled over. Once again it was referred to Palmer.

Once again Palmer ruled it in favour of Sri Lanka, and he was probably right on this occasion. Wisden reported: Vaas retained complete control over the further disposal of the ball before touching the rope, which meant the catch was perfect as per Law 32.

Klusener had two challenges: to bat out the 94 balls left, and to lift the score from 122 to as close to 175 as possible. He decided to play cautiously against Murali, whom Arjuna took off after 9 overs. The moment Wickramasinghe replaced Murali, he was cut ferociously for four.

Elworthy responded with a delicate late cut, a square-cut, and a leg-glance for three fours to go past Klusener. For a while it seemed that the pair would take the score to something competitive, but Vaas, coming back, found an edge. South Africa were 165 for 9. There were still 27 balls left, but Donald was all Klusener had. The next two overs saw only two singles from Klusener. The next two saw four and six being added.

Klusener, on a 39-ball 30, had ensured South Africa reached the last over. Vaas bowled an in-swinging yorker to begin the first ball; all Klusener could manage was to dig it out. The second was swatted with unbelievable power past Vaas for four. They ran a two off the third, and Klusener dismissed the fourth over mid-on for four more.

Despite his experience, Vaas was clearly rattled. He was not bowling poorly, but Klusener was simply bludgeoning him with brute force. Vaas lost control and sent a full-toss on Klusener s hips; the ball went far back into the stands for the first six of the match. The last ball was more accurate, but Klusener turned out to be too strong: the ball cleared the straight boundary.

As was the norm followed during the World Cup, Cronje kept Donald back and got Kallis to bowl with Pollock. Kallis used to be genuinely quick those days; he also moved the ball in the air, and struck twice in his second over; Kaluwitharana edged one to slip, while Jayasuriya played on. With Marvan Atapattu also falling off an inside edge and Pollock trapping Aravinda de Silva leg-before, the score read 14 for 4 after 7 overs.

Roshan Mahanama held one end up, but, as Wisden said, sight of Donald coming on second change and Klusener next was far too much for the remaining batsmen. Donald got Ranatunga and Elworthy got rid of Mahela when Klusener came along.

The last 4 wickets fell for 23, Mahanama eventually falling to Pollock for 36 and Klusener running through the tail with 3 for 21. What seemed to be an easy win for Sri Lanka turned into a no-contest in favour of their opposition, but then, that was how Klusener played throughout the 2003 World Cup.

Man of the match: Lance Klusener. 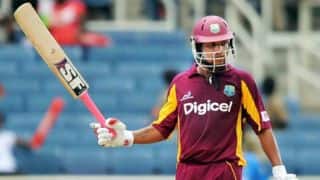