May 26, 1999 witnessed a rampant Sourav Ganguly and Rahul Dravid put up the first 300-run partnership in the history of ODIs. Abhishek Mukherjee looks at one of the rare highs in one of India’s worst World Cup adventures.

It had not a good World Cup for Sri Lanka till then. The World Champions had been thrashed by England at Lord’s in the opening match of the tournament (it was sweet revenge for England for the World Cup 1996 quarter-final massacre); they lost to South Africa at Northampton following a phenomenal all-round show from Lance Klusener; and though they clawed their way back with a win against Zimbabwe at New Road, things were certainly not looking good for them.

The tale for India had been no better. They lost to South Africa at Hove; then, with Sachin Tendulkar returning home following his father’s sudden demise, a demoralised India went down to Zimbabwe at Grace Road; an emotional Tendulkar hundred against Kenya at Bristol brought them back on track, but once again, their encounter against Sri Lanka was a must-win one. Their record against Sri Lanka in the World Cup read a dismal 0-3.

The pitch was firm, the ground was small (Somerset old-timers would have fond memories of Viv Richards and Ian Botham on the ground), and Sri Lanka had a reputation of chasing. Arjuna Ranatunga bowled first. Chaminda Vaas strayed outside leg with his fourth ball, and Sadagoppan Ramesh flicked it for four with nonchalant ease.

The next ball was the kind that made Vaas special. It seemed that the ball was aimed towards middle-stump, and Ramesh played accordingly. The ball moved away at the last moment and hit off-stump. The score read 6 after 5 balls. Rahul Dravid walked out to join Sourav Ganguly.

Fifteen years after the onslaught, it seems almost impossible to believe that Dravid — the man who played because he could hold the innings together — started the carnage. India persisted with Ramesh at the top after Tendulkar’s return, which meant Nayan Mongia had to sit out, leaving Dravid to take up the big gloves.

The first 3 overs passed harmlessly. A flick from Ganguly and a drive from Dravid off Eric Upashantha fetched two boundaries in the fourth over, but 25 for 1 after 5 overs hardly gave an indication of what was to follow. Then Ranatunga replaced Upashantha with Wickramasinghe.

Dravid hit the first ball so hard through cover that the sound might have reached beyond the ground; the next ball was dispatched past mid-on; and the fourth was flicked. The three boundaries were followed up by two more from Vaas’ next over. The ninth over saw three more boundaries. India raced to 71 after 10 overs, Dravid leading the way with 38 from 25 balls, Ganguly providing perfect support with 22 off 34.

The biggest victory for India, however, lay in the fact that Arjuna had to take Vaas off after a spell of 5-0-35-1. He was replaced by Upashantha, and along with Wickramasinghe, he managed to pull things back a bit. Muttiah Muralitharan was introduced in the 16th over; Arjuna also experimented with Mahela Jayawardene, Sanath Jayasuriya, and Aravinda de Silva, India reached 172 for 1 after 30 overs with Dravid on 89 and Ganguly on 71.

Then the sixes came out: Ganguly hit the first one, lofting Aravinda over long-on. Dravid brought up his hundred (his second in two matches) off 102 balls with an off-drive. Murali came back (after an excellent opening spell of 21 from 7 overs), and was greeted by Dravid with a wristy scoop of sorts over cover — for six more.

… but Ganguly takes over

Ganguly responded by reaching his ton off 119 balls, and followed with a four and a six off Murali’s next over, and two sixes and a four off Murali’s final over, racing past Dravid. The second spell went for 39 from 3 overs, and Murali finished with unenviable figures of 10-0-60-0. Unfortunately, the carnage had just begun.

A single off Upashantha took the partnership to 264 — the highest second-wicket stand in history. Dravid took a brace in the next over for the pair to register the highest partnership in history for any wicket. Dravid, possibly bogged down by the depressing fact that he was lagging behind, hit Vaas for 3 fours in 4 balls to take back the lead.

Unfortunately, Ganguly was in no mood to lose the race to 150: he got a life when Wickramasinghe dropped him off Upashantha the next over (the ball went to the fence), hit fours off the next two balls, and celebrated his 150 (off 143 balls) with a pulled six over mid-wicket.

Then Ganguly hit one to deep mid-wicket; they took on Murali’s arms, and Dravid was run out, completely against the run of play; his 145 had taken a mere 129 balls, and included 17 fours and a six. Tendulkar walked out, but Ganguly kept strike. Jayasuriya bowled the next over, and though he bowled two wides and Ganguly hit him for two sixes (the over went for 19), he ended up clean bowling Tendulkar with a yorker.

Both Ajay Jadeja and Robin Singh were keen on going for the big shots instead of giving the strike back to a rampant Ganguly, and perished in successive balls to Wickramasinghe. Vaas bowled a tight line, and though Mohammad Azharuddin was supportive in terms of strike rotation, Ganguly went past Kapil Dev’s 175 not out to register the highest score by an Indian in the World Cup.

His score read 182 when the last over started. He managed single off the second ball, Azhar’s brute force carried the ball over long-on off the next, and Ganguly got the strike back the next ball. There were two balls left. Ganguly needed a six to go past Gary Kirsten’s 188 (the World Cup record) and two sixes to go past Saeed Anwar’s 194 (the world record).

Ganguly tried to clear the fence off Wickramasinghe’s fifth ball, but Upul Chandana, substituting on the ground, took an outstanding catch in front of the sightscreen. India finished on 373 for 7. It was the second-highest score in the World Cup at that time. Ironically, the highest score, 398 for 5, was scored by Sri Lanka.

Ganguly eventually fell for a 158-ball 183 — an innings that included 17 fours and 7 sixes. He also equalled Viv Richards’ record of most sixes in an innings (Ricky Ponting, Imran Nazir, and Adam Gilchrist have later hit 8), and his record for most runs scored in boundaries in an innings (110) still stands. The partnership of 324 was 49 clear of the next-best at that stage.

India had scored 251 after 41 overs, which meant that the last 9 overs accounted for a whopping 122. A more unusual statistic was perhaps the fact that the first four hundreds of the World Cup were scored by Indians (Tendulkar and Dravid against Kenya, and Ganguly and Dravid against Sri Lanka).

Sri Lanka were good chasers, but 374 was too steep a target. Jayasuriya played one back to Javagal Srinath for a near-insane run, and was run out by a distance in the third over. Srinath also trapped Romesh Kaluwitharana leg-before in his next over, which put the fight out of Sri Lanka.

Marvan Atapattu and Aravinda added 51, but it was never going to be enough. With Atapattu and Mahela falling in quick succession, Sri Lanka were left reeling at 79 for 4 in the 16th over. Aravinda scored a fifty, Arjuna and Roshan Mahanama chipped in with cameos, but Sri Lanka were eventually bowled out for 216 in 42.3 overs. Not only did India secure the much-needed points, they also gained with a significantly improved net run rate.

Robin Singh was easily the pick of the bowlers, finishing with figures of 9.3-0-31-5. While everyone lauded the superlative performances of Ganguly and Dravid, the fact that Robin Singh recorded the best bowling figures by an Indian in the World Cup (it was also the second five-wicket haul after Kapil’s 5 for 43) went unnoticed.

– India won the last league match against England at Edgbaston to reach the Super Six stage, but a defeat against Australia at The Oval put them on the backfoot. They beat Pakistan at Old Trafford, but were already out of contention for semifinal when they played their last match, against New Zealand at Trent Bridge; they lost that too.

– Sri Lanka were eliminated by the time they played their last league match, against Kenya at Southampton: they won the match comfortably.

– Ganguly’s 183 was overtaken within six months by Tendulkar, who scored 186* against New Zealand at Hyderabad. Tendulkar also added 331 with Dravid for the second wicket, which remains the highest ODI stand for any wicket. The Indian record, also the world record, is currently held by Rohit Sharma (264).

– Ganguly’s 183, however, remains the second-highest (highest by an Indian) in the World Cup. The partnership also remains a World Cup record for any wicket.

– With 461 runs from 8 matches at 65.85, Dravid finished as the highest run-scorer of the tournament — 63 runs clear of anyone else despite India not making it to the semifinal.

– Robin Singh’s World Cup record for India was bettered by Venkatesh Prasad (5 for 27) during India’s match against Pakistan later that tournament. The record is currently held by Ashish Nehra (6 for 23).

– Jadeja slammed the fifth hundred of the tournament, against Australia, making it 5 out of 5 for Indians. The other countries accounted for the last six, Anwar scoring two of them.

Man of the match: Sourav Ganguly. 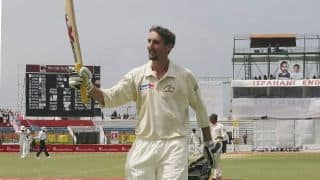 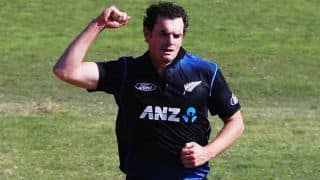