ICC World Cup 1999: South Africa coast to win over India and there is tumult in ear-piece

ICC World Cup 1999: South Africa coast to win over India and there is tumult in ear-piece

India took on South Africa at Hove in the second match of the tournament. Till the 47th over of the second innings, the match was a close, tense affair. The match was also needlessly marred by an ear-piece controversy and an inebriated fan.

May 15, 1999.  The atmosphere was touched with merriment and bonhomie as India took on South Africa at Hove in just the second match of the tournament. And before a rather anticlimactic 47th over of the second innings, the match was a close, tense affair. Arunabha Sengupta remembers the day when a superb game of cricket was needlessly marred by an ear-piece controversy and an inebriated fan.

It was Lance Klusener who spoiled the fun in the end.

The match had been close, keenly contested. The Indian innings had seen controlled aggression, scientific pace setting. The South African chase had been crafted with care, the race between the balls remaining and runs required a neck and neck affair, none gaining on the other, all the indications pointing to a near dead heat as the finish line approached.

India had rejoiced. Jacques Kallis, his mastery providing the plinth on which the South African innings was built, had just been sent back by a Venkatesh Prasad throw from the deep.  The match had been poised on the edge of a knife,  with 27 required off 26 balls.  Traditional tight limited-overs fare.

And then Klusener had walked in, taken guard and bludgeoned the first three balls he faced for boundaries. It had been unfair. Two teams had contested on level playing field and suddenly a man had entered busy batting in another dimension.  The wire had not even been in sight when the game had ended, the Proteas had won with as many as 16 balls to spare.

The City of Princes

It was Hove, the home of willow wielding Indian princes who had turned out for Sussex. There had been the genius of Ranji , the elegance of Duleep and the ephemeral promise of Pataudi. As the memories lingered and expats flocked  in on the Saturday, the modern heroes did not put on a bad show.

Sourav Ganguly, on his 100th appearance for the country, stroked the ball fluently, drives flowing like fizz amidst the festivity. And once he took time off from the crisp off side strokes to dance down the wicket and clobber Nicky Boje out of the ground.

Sachin Tendulkar did not make many, but his five boundaries delighted onlookers. Rahul Dravid added 130 with Ganguly, reviving memories of the day at Lord’s just three summers ago when the two had made their simultaneous Test debuts with strokes echoing around the world.

India perhaps should have got more, but Allan Donald was excellent with his line and aggressive with his speed. Ganguly turned nervous and sluggish as he approached his hundred and took on the arm of Jonty Rhodes to be run out 5 short of the landmark. And the rest of the batting did not really distinguish themselves in the slog overs.  The score read 253 in 50 overs, but in 1999 that was not a bad total on the board.

The drama during the innings was played out beyond the 22 yards as well. The South African coach Bob Woolmer, that advocate of scientific innovation in the game, was experimenting with technology. Captain Hansie Cronje and ace bowler Donald both wore ear pieces, and Woolmer was busy communicating with them as they took the field.

In the box meant for officials, match referee Talat Ali was far from amused. When the drinks were brought out, Ali came out fuming and confronted the coach. The experiment had been a partial success, but now Ali clamped down on it. Later ICC ruled against such advice-dispensing  devices for the rest of the tournament.

As South Africa started their response, a charged up Javagal Srinath ran in to send down a furiously fast first spell. The speed gun surprised one and all. The Indian speedster was bowling as fast as Donald. And he fired out the openers as well.

Herschelle Gibbs was struck on the pads, on the knee  roll with the ball swinging a long way. There were enough doubt, but one had to budget for Steve Bucknor. A long wait was followed by the raise of the finger.  The other opener, Gary Kirsten, tried to send an express delivery through the covers and was bowled off  the inside edge.

It was 22 for 2, and another wicket could  have increased the pressure exponentially. Indeed, with the South African think-tank using Mark Boucher as pinch-hitter, such an eventuality was definitely on the cards. But on this day the move came off. Srinath started straying in line, more in length, and Boucher pulled him for two boundaries before sending one spiralling over the wicket-keeper’s head for six. Anil Kumble bowled him with a googly,  but the quickfire 34 had got the Proteas moving.

And at the other end, Kallis had settled down. Two drives, played square of the wicket with minimum effort, spoke of genuine class. Daryll Cullinan slogged against his phobia of leg-spin and got four off Kumble. A couple of drives flowed off the medium pacers. South Africa were past 100, the partnership looking just a tad threatening.

Skipper Mohammad Azharuddin chucked the ball to Ganguly. Cullinan tried to lift him towards the vast open spaces of the on side. The leading edge took it to point. The man from Kolkata was ecstatic. It was 116 for four. India had the advantage.

But, they needed another wicket. And they had run out of quality bowling. Robin Singh, Ganguly and Tendulkar tried their best but were not really ideal men to create pressure and opportunities. Srinath ran in for another spell and sprayed it far too short or way too down the leg. Kallis helped himself to calm boundaries. Cronje played a brisk little cameo. The balls remaining never quite lagged behind the runs required.

Ajit Agarkar, less than impressive through most of his spell, sent down a short delivery. Cronje pulled it in the air and Ajay Jadeja plucked out an athletic catch at mid-wicket. The equation read 74 off 68 when Rhodes entered. And immediately he started pushing the ball into the gaps and haring down the wicket.

Kallis and Rhodes pushed the score along. Singles were there for the taking, many converted into twos, and there were enough boundary balls in between. The stand amounted to 47, off just 42 balls. And then Kallis slashed Srinath to third man. Rhodes scampered up and down, and sprinted up again. Kallis, uncertain, hesitating, hovered midway between yes and no, and Prasad’s throw to the bowler’s end caught him well short. 27 required off 26 balls.  And  we already know what happened next.

Rhodes took a single, Srinath ran in again, and Klusener bludgeoned him for four.

22 remained to be scored off 24 balls. Agarkar had the ball. And the match virtually ended in the course of that over. Rhodes cracked him for four, and repeated the stroke. A single came next. Klusener squared up. Agarkar ran in. Whack. Four. Whack. Four. It was merciless. The strokes were too powerful. The boundaries too short. The fielders too few. The over cost 17.

And then just to end it quickly, Rhodes lofted Prasad over mid-on for another boundary. 27 had been required off 26 balls when the two had come together. They had got them in 10. The Indians, spirited and determined till the 45th over, suddenly looked as if hit by a tornado.

They were jogging off the field, morose and disappointed, when the traditional Indian fan appeared. Big, boorish, inebriated, without whatever rudimentary sense he might have possessed when sober. He was obviously feeling let down by the team, who had not managed to win it for him while he had guzzled his beer.

He snatched at Azhar’s shirt, and the captain shook him off. And then his eyes fell on Dravid. His lumbering hulking form made towards the Indian batsman and rammed into him. Dravid was shoved off his course.

Unfortunately for this splendid specimen of Indian cricket fandom, the man immediately behind Dravid was Prasad — tall, well-built, and with the mindset of a fast bowler. Prasad’s eyes grew fierce. He glowered at the guy, charged at him, and did unto him as the oaf had done unto his teammate. The brute tottered, toppled and fell in the arms of pursuing policemen.

The well-fought match had to wind up with this bitter after-taste. But that has so often been the story of Indian cricket. 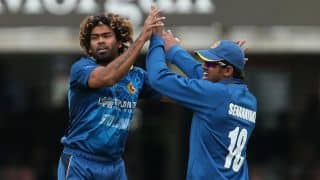