Aasif Karim's parsimonious spell against Australia earned him the Man of the Match award despite Kenya's defeat and Brett Lee's hat-trick.

Following Brett Lee’s hat-trick, Aasif Karim gave Australia a scare at Kingsmead on March 15, 2003. Abhishek Mukherjee looks at a day in paradise for an unheralded cricketer.

It is not every day that a side wins by five wickets with almost 20 overs to spare, a bowler from the winning side takes a hat-trick, and yet the Man of the Match award goes to a member of  the losing side. But then, it was one of those days when Aasif Karim could do nothing wrong.

In a career that spanned seven years, Karim — who also played Davis Cup for Kenya and was in his 40th year — played 34 ODIs, 15 of them in World Cups. He finished with 27 wickets at 41.25, figures that were far from special. And yet, on that day, he could do no wrong; he found accuracy and turn, and had he found support at the other end, Kenya might have pulled off another upset after beating Sri Lanka in the group stages.

Glenn McGrath and Brett Lee took new ball, and the openers, circumspect to begin with, managed to reach 3 after 3.3 overs, 2 of which were leg-byes. Then Lee charged in to Kennedy Otieno Obuya, whose official surname switched between Otieno and Obuya at various points of time. During this match he was Otieno, though his brothers, David and Collins, who also played in the match, were Obuya.

Coming back to the match, Lee bowled a short-pitched delivery outside off; as Otieno left it, the ball sped up, and hit him on his elbow, just below the armguard — and crashed on to the stumps. Not only was he bowled, but he also had to be rushed to the hospital, where X-rays revealed he did not have a fracture. Unfortunately, he was ruled out of the match.

The next ball was straight, and too fast for poor Brijal Patel; it flew to Ricky Ponting at second slip. David Obuya was no match for the yorker that crashed into the leg-stump next ball. Lee claimed the fourth World Cup hat-trick after Chetan Sharma, Saqlain Mushtaq, and Chaminda Vaas.

It was left to Steve Tikolo, that doyen of batsmanship in Kenyan cricket, to consolidate the innings. The effervescent Ravindu Shah played his strokes at the other end, and the pair added 79 before Brad Hogg claimed Shah for 46. Tikolo hung around to see Kenya past the 100-mark and finally fell to Darren Lehmann for 51.

Andy Bichel took two quick wickets and Lehmann struck again as Kenya collapsed from 131 for 4 to 144 for 8. Hitesh Modi (39*) and Martin Suji ensured Kenya batted fifty overs. They finished on 174 for 8. Surprisingly, Ponting did not recall Lee, who finished with 8-3-14-3.

Though Matthew Hayden hit two boundaries off the first over from Martin Suji, Adam Gilchrist was slightly sedate to begin with. Then he cut loose, taking 27 from 11 balls of Suji. Peter Ongondo was not spared either, but it was he who broke through, having Hayden caught at mid-wicket by Joseph Angara, who was substituting for Otieno. The pair had added 50 in 35 balls.

Gilchrist continued with the onslaught, and brought up his fifty in 36 balls. Soon afterwards he slog-swept Collins Obuya outside the small stadium; when he finally was caught-behind by David Obuya (standby for Otieno) off Ongondo, the match was as good as won. Gilchrist’s 67 had taken him 43 balls, and Australia needed a mere 77 from 231 balls with 8 wickets in hand. It should have been a no-contest from there.

A day in paradise

Ponting and Andrew Symonds strolled along, taking the score to 109 for 2 after 15 overs. Then Modi (acting captain in lieu of Tikolo, who had left with fever) brought on Karim. The fifth ball was on a length, and Ponting was trapped at the crease. Steve Bucknor took his time, but there was not much to think: it was as plumb as they made them.

It was a wicket-maiden, and he struck again with the third ball of his second over: Lehmann poked at one outside off and was caught-behind; Ponting promoted Hogg to increase the tempo, but three balls later Hogg walked back after hitting one back to Karim. At this stage his figures read 2-2-0-3, and Australia, suddenly 117 for 5, still needed 58. Ponting held back Damien Martyn and promoted Ian Harvey instead.

Buoyed by the triple-strike, the Kenyan ground fielding reached new heights. The slumped shoulders sprung back to rapt attention as they ran like gazelles and flung themselves on the ground without inhibition. But Karim — balding, ageing Karim — seemed to have reached another plane: he controlled the ball as if on a thread, pitched them exactly where he wanted to, keeping the Australians on a tight leash.

At the other end, Collins Obuya obtained reasonable turn. He was aggressive and went flat out in search of wickets, but Kenya had been left with little alternative. He bowled much better than what his final figures of 8-0-62-0 suggest: the Australians, strangled by Karim at one end, went after him; on another day he could well have finished with four wickets.

Karim conceded a run off each of his next 2 overs, which made his figures drop to 4-2-2-3. Then he went back to his parsimonious best, sending down four more maidens to achieve Bapu Nadkarni-ish figures of 8-6-2-3. Symonds and Harvey scored runs at the other end. Modi recalled Ongondo, who bowled through, finishing with 2 for 44, but ran out of options (the Suji brothers — Martin and Tony — had conceded 60 between them from 5 overs).

Then, with 2 runs to score from 19 overs, Symonds stepped out against Karim; the ball took the outside edge and went to backward point, and the pair stole a single. Harvey placed the next ball through mid-wicket to ruin Karim’s figures (8.2-6-7-3 was a serious drop from his lofty standards) and bring up the win.

Karim was named Man of the Match ahead of Lee. Wisden mentioned that “Ponting professed himself ‘bemused’ that Lee’s thrilling hat-trick, which had reduced Kenya to three for three, had not earned the match award.” However, not only did Karim breathe life into what was headed for a one-sided affair, he also finished with figures better than Lee’s.

What was more, it was not every day that you earn a handshake from Bucknor during a spell.

– Both Australia and Kenya made it to the semifinal. While Kenya were knocked out by India in the semi-final, Australia beat Sri Lanka and India to defend their title.

Man of the match: Aasif Karim. 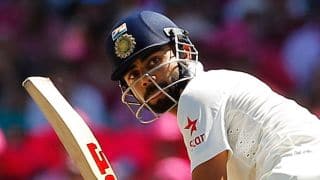