Of all South Africa's World Cup exits, 2003 was perhaps the most embarrassing.

On March 3, 2003, South Africa tasted another embarrassing exit from a World Cup, that too on home soil. Needing a victory in their last league game, they dramatically tied with Sri Lanka as captain Shaun Pollock was left to rue it. Nishad Pai Vaidya recalls the drama at Durban.

In 2003, The Rainbow Nation hosted the World Cup, hoping to erase bitter memories of the past. Since readmission in 1991, South Africa boasted of a fantastic one-day side that could dominate the best on their day. However, on the big stage, bad luck and nerves robbed them off the opportunity to go the distance. In 1992, an egregious rain-rule saw them crash out and in 1999 they stumbled on the cusp of qualification to the final.

With the World Cup on home soil, the Proteas were positive about turning the tide. However, going into their last league game, they needed a victory to progress through to the Super Sixes. There was an unmistakable sense on déjà vu as they approached another banana skin at the world event. Up against them were the Sri Lankans — who seemed to have qualified, but wanted a win to seal the deal.

Sanath Jayasuriya, the Sri Lankan captain, won the toss and elected to bat first at Kingsmead, Durban. The pressure was on South Africa as they would now have to chase to seal a berth in the Super Sixes. Marvan Atapattu’s well-paced hundred and Aravinda de Silva’s brisk 73 took Sri Lanka to 268. A target of 269 was gettable, but not the easiest under light at Durban.

Herschelle Gibbs and Graeme Smith got South Africa off to a good start and set a platform for a run-chase. A storm was brewing round the corner and the hosts knew they had to match the Duckworth–Lewis (D/L) targets in case the heavens opened up. In the 12th over, Smith holed out to the deep as Sri Lanka got their first breakthrough. Gary Kirsten and Jacques Kallis didn’t last too long, but Gibbs continued to attack and kept South Africa in the hunt. He brought up his fifty and his team’s hundred with a maximum over square-leg in the 20th over.

The pressure was immense and it intensified when Muttiah Muralitharan bowled Gibbs for 73 with the score reading 149 for 4 in the 29th over. Boeta Dippenaar followed Gibbs the next ball as skipper Shaun Pollock walked out to save his side. The chirpy Kumar Sangakkara decided to play a few mind=games and the South African captain was the target of his famous “weight of expectations” sledge.

The words couldn’t have been more appropriate as Pollock and Mark Boucher were batting for their lives. Sangakkara didn’t make things easy by pointing out that “the weight of the country” was behind them “depending on Shaun.”

Gradually, the South African batsmen started rebuilding the innings and made a steady march towards the total. However, the asking rate had risen over seven as they moved into the last ten overs of the game. The clouds were building and time was running out. To make matters worse, Pollock was run out with 57 to get off 45 balls. That dismissal set them back further and the task became tougher by the minute.

The clouds finally gave way as a drizzle enveloped Kingsmead. With the rain building, the players knew they would go off anytime. Needing 46 off 32 deliveries, Boucher advanced down the track to loft Muralitharan for a six over wide long-on. The D/L par at the end of the over read 229 and the crowd celebrated as if their side had won. Boucher pumped his fists as the ball cleared the fence. The celebrations were certainly premature. They had to get one more than the par score to register a win.

The next delivery, Boucher worked it around the mid-wicket for no runs believing that he had done the job for his side. As the delivery was being bowled, Tony Greig said on air: “If they don’t get back on, they need one more run. They are probably aware of it.” The rain intensified and the umpires called for the covers. In the dressing room, Pollock held his face in disappointment as they walked back. He knew that they were a run short of the required score.

As it rained, Pollock could do nothing but watch his country exiting the World Cup. No further play was possible and the match was a tie under the D/L method. Yet another World Cup ended in disappointment for South Africa. As a result, Pollock was sacked from captaincy and a young Smith was handed the reins

The tag of “chokers” wasn’t going to leave the Proteas anytime soon. They are yet to win a world event despite having a fantastic side. Mickey Arthur, their former coach, summed it up perfectly after another embarrassing exit at the 2011 World Cup, “The monkey’s almost become a gorilla now and until we win an ICC event it’s always going to be there I’m afraid.” 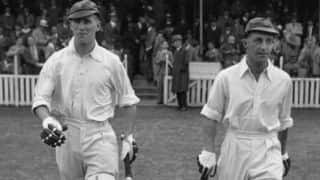