Sri Lanka were beaten by 53 runs by minnows Kenya, who would later go on to become the first Associate Nation to play a World Cup semi-final.

Why do we play sport? Is it about entertainment? Is it about money and fame and glamour? Why did Abebe Bikila run, or for that matter, why did Guor Marial, decades after Bikila? What prompted Sergei Bubka to go on breaking his own record, or made Emil Zatopek or Jack Hobbs (or, closer to home, Leander Paes) to remain age-proof?

Kenya made their first World Cup cricket appearance in 1996, and caused quite a stir by beating West Indies at Pune. Unfortunately, losing all matches in ICC Cricket World Cup 1999 were not very encouraging for them. A 10-wicket humiliation against South Africa at Potchefstroom hurt them, but Kenya sort of made up for it following a four-wicket triumph over Canada at Newlands.

The biggest blow came when New Zealand declined to play the match at Nairobi Gymkhana Club Ground. Kenya got full points for the match, but both their stature and revenue took massive toll. Then came the match against Sri Lanka.

Kennedy Otieno (who sometimes prefers to be called Kennedy Obuya) is the eldest of all Obuya brothers; all three brothers — Kennedy, David, and Collins — were in the Kenya squad for ICC Cricket World Cup 2003, but David was left out of the match against Sri Lanka.

If one chronicles the history of Kenya cricket, Kennedy Otieno’s name will feature among the biggest names: he had scored 85 in Kenya’s second ever ODI, against Australia in World Cup 1996 — an innings that can easily be called the first great innings in Kenyan history; and his 144 against Bangladesh remains the highest score by a Kenyan in ODIs.

Here, too, after Chaminda Vaas trapped the elegant Ravindu Shah LBW with the second ball of the match, Otieno counterattacked, slog-sweeping Vaas for six and following it with another. He shepherded the Kenyan batting against Vaas and Muttiah Muralitharan, scoring an 88-ball 60 with 8 fours and 2 sixes. After Otieno was fourth out on 112 in the 28th over, Hitesh Modi and Maurice Odumbe helped Kenya approach the 200-mark.

With Collins Obuya holding one end up, Peter Ongondo played a cameo to take Kenya past the landmark. Vaas and Murali claimed seven wickets for 69 between them from 20 overs, but the other bowlers did not back them up sufficiently: Kenya finished with 210 for nine. It was certainly not a match-winning total, but at least the bowlers had something to fight with.

Did the Sri Lankans take the Kenyans lightly? They certainly did not have anything to be scared of when Martin Suji bowled removed Sanath Jayasuriya for three after Marvan Atapattu hit him for two fours in the first over. Atapattu played sedately before Thomas Odoyo brought one back to bowl him, but Sri Lanka looked quite settled at 71 for two with Hashan Tillakaratne and Aravinda de Silva going strong.

It was Tillakaratne’s wicket that turned the match on its head: with 140 to score from 195 balls, he holed out to Tony Suji: it was Obuya’s first wicket of the match. Mahela Jayawardene hit one back to Obuya, while Kumar Sangakkara was caught behind.

The Kenyan fervour reached another dimension by this stage. They fielded with purpose, hurling themselves at anything remotely close to them. Wisden wrote: “The style, all wide-grinning, grassy-kneed enthusiasm, was unforgettable: Kenya chased like lion cubs, backed up in gangs and jigged after every wicket.”

The big wicket fell when Aravinda tried to cut Obuya from close to his body; the ball landed into the gauntlets of Otieno, who threw the ball in the air as his younger brother ran in to join in the celebrations. Vaas hit one back to Obuya shortly afterwards, who moved rapidly to his left and came up with the catch in one fluid motion and ran and ran and ran and ran…

It was perhaps then that the Sri Lankans realised it was too late. Russel Arnold tried to restore some sanity, but somewhere deep down he was also aware of the futility of the task. Steve Tikolo brought on himself to get rid of Prabath Nissanka; and Murali, going for a big hoick, found Tony Suji at deep mid-wicket: he held on to it, and broke into a slow war-dance as the partisan crowd cheered the hosts on.

Odumbe ended things when Dilhara Fernando tried to reverse-sweep him and played on to the stumps; Otieno grabbed a couple, and off they ran into a huddle, celebrating, jumping and dancing in unison as a forlorn Arnold looked on; and when they did that much-deserved victory lap, it did not seem they would stop running anytime soon.

“The worst game of my career,” said a dejected Jayasuriya later at the presentation ceremony.

– Both Sri Lanka and Kenya lost in the semi-final that year.

– Obuya’s figures remain the best for any non-Test playing nation in ODIs.

– Obuya also earned a stint with Warwickshire that summer. He became the first Kenyan to play a full season in the County Championship.

Man of the Match: Collins Obuya. 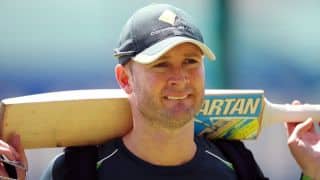