AB de Villiers reached 100 from 114 balls. Then he pulled a hamstring, but refused to retire hurt. The next 16 balls fetched him 36.

AB de Villiers refused to retire hurt despite a hamstring injury at St George s on April 10, 2007. Abhishek Mukherjee looks at one of the brutal onslaughts in the history of World Cup cricket.

Going into ICC World Cup 2007 AB de Villiers was a busy, multipurpose batsman. Blessed with the gift of acceleration at will, the South African team management used him as a floater, accommodating him at various positions in the line-up as per requirement. He had a bizarre run in the tournament, having scored 0, 62, 92, 0, 0, and 15.

He was far from being the bowler-slaughtering ogre of the 2010s. However, St George s, Granada saw signs of what was to come that day. They realised one thing about de Villiers something that old-timers used to say about Gordon Greenidge: He was dangerous on two legs and deadly on one.

Brian Lara, playing his last tournament, elected to bowl: the pitch was indeed a bit damp, and West Indies had selected four pacers. The decision seemed to pay off, as Graeme Smith played an awkward stroke off an out-swinger from Corey Collymore only for Denesh Ramdin to accept the edge gleefully. The score read 21 for 1 after 7 overs.

De Villiers finally opened up in the tenth over: he sliced Daren Powell past point for four, and lofted him over mid-wicket four balls later. Jacques Kallis joined forces: he raced to 19 from 17 balls, decided that enough was enough, and went after poor Dwayne Bravo in his first over. He smashed him through extra-cover for four, cleared the cover fence for six, and shuffled across to dismiss Bravo for consecutive fours past mid-wicket. The next 7 overs yielded 53.

Bravo seemed to pull things back a bit before de Villiers cut him for four and cleared long-on for six to bring up 50 from 58 balls. Kallis 50 came off 46 balls, and though there were a few quiet overs South Africa reached 190 for 1 after 35 overs. Then Kallis played back to Chris Gayle, trying to force him, and lost his middle-stump: his 81 had taken 86 balls.

It was not until the 40th over that de Villiers finally cut loose. Earlier, he had reached his hundred from 114 balls, and had pulled his hamstring in the process. With Kallis carrying a minor niggle, Smith walked out as his runner. AB had decided to continue. Unfortunately for West Indies, he decided to go after everything. De Villiers stepped out to Gayle, clearing the mid-wicket fence, going down in pain at the same time. Later that over he lofted Gayle over long-on, still hobbling around.

Lara turned to Sarwan. The strategy was sound: strokeplay without footwork was probably more difficult against spinners. Unfortunately for Lara, de Villiers slog-swept Sarwan for two sixes and a four. On came Bravo, and de Villiers, his feet refusing to move, creamed him through cover. He lofted Bravo over extra-cover the same over, and unable to move his right leg, fell over: his right hamstring had given way.

It took Collymore to dislodge him. There was nothing wrong with the stroke: with fine-leg up he tried to clear him, but could not. Shivnarine Chanderpaul claimed the catch, and de Villiers returned for a 130-ball 146. Smith promoted Mark Boucher above Ashwell Prince and Loots Bosman to join Herschelle Gibbs.

De Villiers dismissal had come in the 44th over, at the end of which the score read 269 for 3. It was then that Lara eventually claimed the Powerplay. Exactly why he had decided to wait for the end remains a mystery. The norm in 2007 was to exhaust the Powerplay overs by the 20th over. Surprisingly, Lara had kept it for the end, and paid a hefty price.

Gibbs and Boucher tore into the West Indian fast bowlers: Ian Bradshaw conceded 18 off the 45th over, and dropped Gibbs off Collymore in the 46th (which went for 7); they went after poor Bradshaw again, taking 17 off the 47th over; the next over, from Bravo, saw nine being scored; and finally, Powell, bowling the 49th over, gave away 26 including 4 sixes.

Gibbs fifty took him 34 balls; Boucher s, 22 the third-fastest in World Cup cricket at that time. The Powerplay went for 77 runs without a wicket. Boucher hit one back to Bravo in the last over, but still conceded 10. South Africa finished with a whopping 356 for 4.

Chanderpaul went after Shaun Pollock and was caught in the slips in the third over, but Gayle and Dwayne Smith settled down, adding 60 in 53 balls. Andre Nel accounted for Smith while Gayle pushed one to Prince at mid-wicket, and was caught in a split-second s indecision. He fell short of the direct hit.

Sarwan opened up from the beginning, going after the bowlers. Lara, too, played a majestic cover-drive off Nel, but played on to one from Kallis. Bravo holed out to mid-wicket off Pollock; Kieron Pollard somehow managed to step out and york himself off Kallis; and Ramdin was gobbled up by Smith, who was bowling his innocuous off-breaks.

Sarwan decided to give it his everything: he hit Smith for three consecutive boundaries, forcing a bowling change. He kept the match alive with his shots, and kept the battle on till he played Makhaya Ntini straight to mid-off: Sarwan s 75-ball onslaught had fetched him 92, and with him faded whatever little chance West Indies had of coming back to the contest.

Powell gave the ball its fair share of thumping, finishing on an unbeaten 48 from 36 balls, but the target was always beyond reach. Collymore hit Smith for six off the last ball of the innings, and West Indies, with 289 for 9, lost by 67 runs.

– De Villiers registered another duck that World Cup, against New Zealand at St George s. in all he scored a hundred, 2 fifties, a 42, two 15s, and 4 ducks. 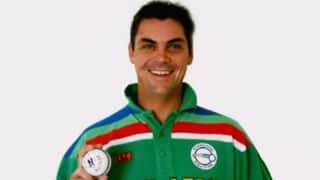 Is Mohammed Shami the greatest ODI strike bowler ever?