Adam Gilchrist smashed 149 in the 2007 World Cup final to help set up a win for Australia.

World Cup 2007 ended on April 28, 2007 under dark sky and after a few farcical overs — which, to be honest, was a fitting end to perhaps the most disastrous edition of the biggest cricket tournament on Earth. Abhishek Mukherjee looks back at the near-nonsensical events that overshadowed a once-in-a-generation performance by Adam Gilchrist.

Coloured clothing for cricketers and umpires, coloured gear, white balls, late hours, black sight-screens: day-and-night had revolutionised cricket, especially the shorter formats, in more ways than one. The most salient feature of cricket under lights, however, is the fact that it is played under lights; hence the name.

The simple requirement was flouted that day at Kensington Oval, that too in a World Cup final. The match went on under farcical conditions, and by the time Australia lifted their third consecutive World Cup, the waxing gibbous in the sky was the only source of light in a ground that was certainly not meant for cricket after the Sun went down.

There was little doubt that the best two teams of the tournament had met in the final. Though Australia were head and shoulders above the other sides, Sri Lanka were definitely the next best; South Africa, perhaps the only side that could match Sri Lanka, went down in the semifinal when an all-out aggressive strategy against Australia backfired completely.

Though the teams played well (despite the anticlimactic exit of India and Pakistan in the league stage), the organisers acted unprofessionally throughout the tournament. Overpriced tickets led to empty stands, and the players kept on performing hard in silence — an unthinkable atmosphere in West Indies. “They have brought the World Cup to the most joyous and spontaneous part of the cricket world and squeezed every ounce of enjoyment out of it,” wrote Sambit Bal in ESPNCricinfo.

There were doubts over the final being played at all on the stipulated day following a steady drizzle that converted into a heavy shower. Steve Bucknor and Aleem Dar went out several times before declaring that it will be a 38-over contest, and would start at 12.15 PM. Ricky Ponting had no hesitation in batting first, and out came Matthew Hayden and Adam Gilchrist.

Put to the sword

Chaminda Vaas and Lasith Malinga had two quiet overs that resulted in four runs. Then all hell broke loose: the second ball of the third over was casually flicked for four, and the next ball soared into the stands over long-on. Vaas’ next over saw two more boundaries from Gilchrist, and though he threatened to cut loose, Sri Lanka did a fantastic job to keep Australia to 46 from 10 overs. Vaas had changed ends meanwhile, Dilhara Fernando had been introduced, and given that it was a 38-over match, the advantage lay with Sri Lanka.

Then came the drop: Gilchrist hit a full-blooded shot back to Dilhara; it was low, and Dilhara, certainly not the most acrobatic of fielders, could not hold on to it. At that stage he was on 31 from 31 balls; the next ball raced to the fence past mid-wicket; the one after that, past long-on. Dilhara bowled a short one outside off; Gilchrist thwacked it, off the front foot, cross-batted, over long-on into the stands.

Mahela Jayawardene changed his game-plan immediately, introducing both Muttiah Muralitharan and Tillakaratne Dilshan. Murali had a loud appeal in his first over, but Bucknor decided — rightly — that it had pitched outside leg. Gilchrist’s fifty came up with a single as the ball took the leading edge off Murali and went past a diving mid-off. It had taken him 43 balls, and Australia’s score read 69 without loss in 13.1 overs: advantage Sri Lanka, till then.

Dilshan’s bowling fell apart in the next over: two balls were hit over his head for sixes, and a wide down the leg beat Kumar Sangakkara to the fence. Murali pulled things back somewhat next over, and Australia reached 98 with only 22 overs left. How much would they score against Murali, Vaas, Malinga, and Dilhara?

Gilchrist cleared long-off against Dilhara; slog-swept Murali into the stands; late-cut Dilhara past Sangakkara for four; and after Vaas bowled a tight over, Hayden — who had gone almost unnoticed till then — put everything behind one from Malinga: it was not a poor ball, and neither was it well-timed; it still soared over long-off into the stands.

Two balls later Gilchrist reached his hundred — off 72 balls — with a slap over mid-off. He edged the next ball, Sangakkara flung himself to his left, but could only reach it with his fingertips. The Sri Lankans went up in unison, but Sangakkara — who had earned quite a name for appealing for everything — admitted that he had grassed the chance.

Vaas went off radar next over as Gilchrist smashed two fours, punctuated by five wides. Gilchrist hit consecutive boundaries off Malinga next over before taking a single — and the unthinkable happened: Hayden tried to clear extra-cover but could only hole out to a jumping Mahela at cover.

Australia’s score read 172 after the 23rd over, but Sri Lanka conceded a mere 14 off the next three, regaining some control over proceedings. Then Sanath Jayasuriya darted one at his legs, and Gilchrist swiped it over mid-wicket for another violent sweep, and hit Jayasuriya for a six and a four in consecutive balls shortly afterwards.

Then Dilhara struck, making amends for his earlier lapse. Gilchrist tried an almighty hoick but could only top-edge it to Chamara Silva at mid-wicket. Gilchrist’s 149 had taken him 104 balls, and had included 13 fours and 8 sixes. After Dilhara’s drop he had scored 118 from 74 balls. It still remains the highest score in a World Cup final.

Some frantic hitting followed as Ponting and Andrew Symonds added 37 from 31 balls. Shane Watson did not last, and Australia finished on 281 for 4, managing a mere 57 from 45 balls after Gilchrist’s departure. Such was the impact of Gilchrist’s innings that Australia managed a run rate of 7.39 despite the other batsmen managing a mere 109 from 127 balls.

The first ball of the Sri Lankan innings saw an outrageous shot. Upul Tharanga walked down, Hayden-style, and cover-drove Nathan Bracken for four. He did not last long: caught in two minds, Tharanga was stuck at the crease and edged one to Gilchrist off Bracken.

This brought Jayasuriya and Sangakkara, perhaps the most dangerous Sri Lankan batsmen, together. They had a cautious start, reaching 53 after 12 overs (Sri Lanka needed 229 from 168 balls at this stage) before Jayasuriya hit three fours off an over from Watson. Sangakkara responded in style, dispatching Glenn McGrath over mid-wicket before cover-driving and pulling him for fours of the next two balls. They had taken 29 off 2 overs, and 200 from 156 did not look too difficult.

The pair slowed down after the mini-explosion, reaching 117 after 19 overs (165 from 114 was quite gettable with nine wickets in hand). Jayasuriya had reached his fifty meanwhile; Sangakkara unleashed one of his trademark cover-drives against Brad Hogg, but holed out to Ponting at short mid-wicket next ball. He had scored 54 from 52, and Sri Lanka needed 159 from 109.

Michael Clarke picked up the big wicket as Jayasuriya went for a wild swipe, only to see his off-stump pegged back; his 63 had taken him 67 balls. The light deteriorated shortly afterwards and the rain came back with Sri Lanka on 149 for 3 after 24.5 overs: the Duckworth-Lewis par score read 175 after 25 overs. The target was adjusted to 269 from 36 overs, which meant Sri Lanka had to score 120 more from 67 balls. Certainly not impossible.

Then Jayawardene fell, trapped leg-before by Watson, and though both Silva and Dilshan hit a few attractive strokes (Bracken helped by missing a caught-and-bowled chance of Silva) the latter was dismissed by an excellent throw from Clarke. The target read 81 from 36; impossible?

Silva went after Clarke next over and was bowled; Russel Arnold, playing his last international match, edged one to Gilchrist off McGrath; and though Malinga walked out and hit a six, Sri Lanka were left to score 74 off 24. Then the light faded out, again; the moon had come out. Light was offered, and both Vaas and Malinga accepted it.

Australia had definitely won the match on Duckworth-Lewis. Out came the stands, and just as the Sri Lankans were about to walk off and the Australians had started celebrating, Dar walked up to them, informing the Australians that they had not won the World Cup. Yet.

Billy Bowden, the reserve umpire, joined the fray (though Rudi Koertzen, the third umpire, stayed back), as did Mahela. As per rules, if bad light had stopped play, the match would have had to be finished on the reserve day, which meant the Australians would have to come back again to bowl those four overs before they could lift the World Cup.

Jayawardene and Ponting reached a consensus: while Ponting would use only his slow bowlers, Sri Lankans would not go all out after them. Malinga was stumped off Symonds sixth ball after play resumed, but Vaas and Dilhara played out the four overs. Sri Lanka finished on 215 for eight and lost by 53 runs.

Australia finally lifted the World Cup — amidst moonlight — though not after the four umpires and match referee Jeff Crowe were booed for the farcical finish. Everton Weekes presented the Man of the Match award to Gilchrist, while Garry Sobers, whose arrival was met with unanimous tumultuous cheer, gave the Man of the Series to McGrath, who had the best line of the evening: “Bit dark at the moment, but loving every minute”.

– Bucknor, Dar, Koertzen, Bowden, and Crowe were all suspended from the inaugural ICC World T20 later that year for a fault that was not theirs.
– McGrath never played another international match.

Man of the Match: Adam Gilchrist.
Man of the Series: Glenn McGrath. 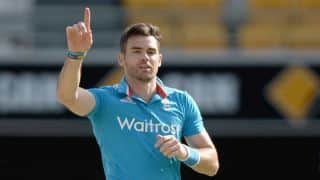 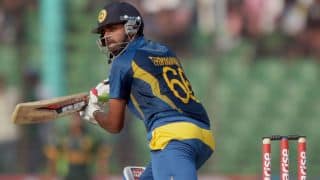