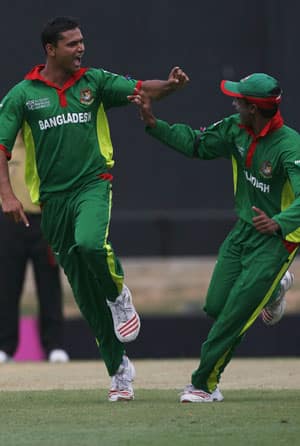 Mashrafe Mortaza came into the 2007 World Cup with a huge reputation after being named the No 1 ODI bowler in 2006, scalping 49 wickets in 27 matches. India found out in quick time why the Bangladesh pacer was rate so highly in their Group B encounter.

Mortaza should thank his captain Habibul Bashar for doing him a huge favour by winning the toss and inserting India in on a deck which had fair amount of moisture on it. Nerves of playing a big game showed on Mortaza as he sprayed the ball around in the first over. But once he settled, the Bangadesh speedster came into his own, keeping the Indian openers on a tight leash.

The persistence didn’t take too long to translate into wickets. Of course, Mortaza’s job was made easier by the fact that he had to confront someone like Virender Sehwag who was going through a lean trot. And it was Sehwag who became Mortaza’s first scalp when he tried to cut an off-cutter and inside-edged onto his stumps. India was one for six in the third over. Just the start Bangladesh was looking for.

The 23-year-old then got a ball to pitch on the off-stump and move away to entice Robin Uthappa to drive away from his body. The ball caught the edge of his bat and flew straight to Aftab Ahmed at point. The Indian scoreboard now read 21 for two.

Mortaza’s early strikes were admirably complemented by the spin combo of Mohammad Rafique and Abdur Rehman. Suddenly, the visions of an upset at Port-of-Spain were raised by the Bangladesh bowlers.

Only Yuvraj Singh offered a semblance of resistance as India never recovered from the early blows.

The Bangladesh pace spearhead returned for his final spell and applied the finishing touches to the Indian innings, dislodging Ajit Agarkar and Munaf Patel as India folded for 191 in 49.3 overs.

Mortaza final figures read 9.3-2-38-4. And it was largely due to his effort that helped Bangladesh notch up only their third World Cup win. Of course, one cannot undermined the super batting from Tamim Iqbal, Shakib Al Hasan and Mushfiqur Rahim that played a contributory role in Bangladesh closing out the match with nine balls and five wickets to spare.

Bangladesh captain Habibul Bashar opined: “Mortaza was terrific. If your opening bowler takes wickets in his first spell, then you can hope to bowl the opposition out for less than 200,” he said.

Coach Dav Whatmore also took note of how the bowler has shaped up well despite the injury clouds that keep hovering over him from time to time. “Mashrafe Mortaza has been managed really well. He had two major reconstructions in his very young career so far, but in the last 18 months he hasn’t missed a game because of injury and that is a very good thing.”

Mortaza was named Man of the Match and dedicated the award to his best friend and teammate Manjural Islam, who died in a road accident near Dhaka on the eve of the match.