Robin Uthappa poked at it tentatively, perhaps trying to push it to third-man. Instead, he got the edge which flew to where second slip would have stood. At first slip was the heavyweight Dwayne Leverock. As the ball went by him, Leverock dived to his right, put his hand out and caught it.

Dwayne Leverock’s catch of Robin Uthappa during ICC Cricket World Cup 2007 lingers in memory despite the carnage that followed. The sight of the portly figure, diving to his right and clutching the ball one-handed remains one of the most iconic images of an otherwise dull tournament. Nishad Pai Vaidya looks back at March 19, 2007 — the day the “earth shook.”

One would say that the ICC World Cup 2007 was an anomaly. India and Pakistan crashed out of the first round. Andrew Flintoff found himself in hot water over a drinking incident. South Africa were beaten by Bangladesh. The rain-reduced final ended in controversial circumstances with the dying moments played in near darkness. Plus, there was the death of Bob Woolmer, the Pakistan coach, who passed away a day after his side was knocked out. Only Australia’s predictable dominance brought normalcy to the events in the Caribbean that summer.

Then there was this portly figure from Bermuda, a team that was making its debut at the biggest stage. Weighing 127 kilograms, Dwayne Leverock was a unique figure on the field of play with his bulk and prominent paunch. In an era where cricketers moved to fitness, training hard and putting in hours at the gym, Leverock perhaps ignited hopes in a few oddly shaped to play the sport. Even before the tournament began, there was talk about this heavyweight left-arm spinner from Bermuda. Though he performed decently well in the warm-up games, his bowling took a beating in the main round. And, it wasn’t his bowling but his fielding that won his a moment in limelight.

Stunning Robin Uthappa with the catch

India and Bermuda warmed up to take on each other at the Queens Park Oval, Trinidad. Bermuda made their World Cup debut against Sri Lanka and were beaten quite comprehensively. India were embarrassed by Bangladesh in their opening game and they battled a crisis of their own. Though Bermuda were nowhere near their class, India knew that they could ill-afford to take it easy.

In gloomy circumstances, Bermuda won the toss and put India in to bat. Robin Uthappa and Sourav Ganguly opened the batting with Kevin Hurdle taking the ball for Bermuda. India got away off the third ball as Uthappa played it towards mid-wicket for three. Ganguly played out rest of the over.

Uthappa took guard to take strike to Malachi Jones, a 17-year-old medium pacer. He ran in and bowled an innocuous looking delivery outside the off-stump. Uthappa poked at it tentatively, perhaps trying to push it to third man. Instead, he got the edge which flew to where second slip would have stood. At first slip was the heavyweight Leverock. As the ball went by him, Leverock dived to his right, put his hand out and caught it. He landed with all his weight, as if the extra bulk was a cushion. Bermuda celebrated as if they had won the game! David Lloyd beamed on commentary, “Boys, you need another 9 wickets!”

Jones ran towards the leg-side. Leverock got up, moved to the leg-side and then started running the other way. A few members had flocked around Jones, while the others tried to get to Leverock, who was blowing kisses all over. India were left stunned! This couldn’t have happened! For Bermuda, this was easily their biggest moment in World Cup cricket. Lending his voice to the moment was Lloyd, who summed up the events in his inimitable style. “The Earth shook,” he said as the replays beamed across the screens.

– Virender Sehwag smashed a century as the Indian team got its act together. They amassed 413 for 5 in their 50 overs.

– Leverock was taken apart for 96 runs in his 10 overs. He got the wicket of Yuvraj Singh, ironically, caught by Jones.

– Bermuda slumped to a 257-run defeat as India stayed alive in the competition.

– India lost to Sri Lanka and were eliminated from the World Cup when Bangladesh beat Bermuda.

Man of the Match: Virender Sehwag. 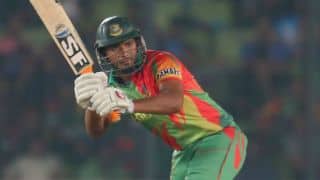