Australia had no reason to be scared. They had won the last three World Cups, and hadn't lost 34 World Cup matches on the trot.

On March 19, 2011, the R Premadasa Stadium, Colombo, witnessed Australia s first defeat in an ICC World Cup cricket match in the third millennium. Abhishek Mukherjee re-lives a day when Shahid Afridi s men turned the tide to bring the most famous streak in cricket s grandest stage to an end.

It was a hard-fought tussle in murky Headingley. Pakistan had scored 275 for eight, but though Australia lost wickets, the battle was on: Mark Waugh and Ricky Ponting added 91 in 99 balls for the second wicket, and Steve Waugh and Michael Bevan 113 in 131 balls for the fourth. Pakistan did not give up hope: Shoaib Akhtar bowled Waugh, and both Wasim Akram and Saqlain Mushtaq kept striking at regular intervals. Australia were bowled out for 265.

But that was May 23, 1999. Close to twelve years had passed since that day. The Waughs had bowed out of international cricket, as had Bevan, Wasim, and Saqlain. It was evident that both Ponting and Shoaib on ascent in 1999 were approaching the dusks of their careers. Brian Lara, Inzamam-ul-Haq, Glenn McGrath, and Shane Warne had all bowed out. New heroes had arrived to take their places instead.

But Australia had not lost a match in the World Cup, not since that gloomy Headingley afternoon. They had tied the semi-final against South Africa at Edgbaston, and two weeks before the Premadasa encounter, their match against Sri Lanka at the same ground had been washed off: Sri Lanka, on 146 for three after 32.5 overs, had been cruising, but Australia had bounced back from worse situations.

They had no reason to be scared. After all, they had won the last three World Cups, and had not lost 34 World Cup matches on the trot. Going into their last league match, Australia were also the only undefeated side in ICC Cricket World Cup 2011.

Proceedings outside the ground were not quite eventless. The match was supposed to be played on a Saturday. It was on Wednesday evening that Shoaib told team manager Intikhab Alam that he would retire after the World Cup. Players were informed, as was the press. Wasim, the man who had lived it all, acknowledged Shoaib s decision: You did the right thing. Now move on.

The Australians, put up at the hotel, bade their farewell to the man but Brett Lee s was different. Lee was, after all, the man with whom Shoaib had been competing for the slot of the fastest bowler in history. The man-boy from Wollongong hugged the menace from Rawalpindi: What have you gone and done, man? It s gonna happen to me as well soon.

Ponting batted first, and Shahid Afridi decided to go with Abdur Rehman alongside Umar Gul. The left-arm spinner was preferred over the enigmatic Saeed Ajmal; the team management had also decided to include Wahab Riaz ahead of Shoaib, and use the all-rounder duo of Mohammad Hafeez and Abdul Razzaq sparingly.

Rehman bowled to a plan: six men were on the off, and Rehman, bowling on middle-stump, was carted for four off the first ball he bowled. The second ball hit Watson s pad; the umpire ruled him not out, Afridi called for a review but the decision stayed put.

Not for long, though: with runs not coming as fast as he would have liked, Watson went for an almighty heave off Gul and lost his off-stump. Haddin responded by hitting Rehman over his head for six. The run rate increased as Afridi replaced the opening bowlers with Wahab and himself. Australia reached 73 for 1 in 18 overs as Hafeez trotted in to bowl to Ponting.

Ponting swept Hafeez hard, and the ball flew to Misbah-ul-Haq at square-leg: he grassed the change. Two balls later Ponting cut hard, only for the ball to take a thick edge and land in the big gloves of, hold your breath, Kamran Akmal. Michael Clarke walked out, but soon afterwards Haddin tried to guide Wahab to third-man; there was a faint edge, and Kamran took another catch.

Cameron White struggled for a while before Clarke flicked one off Hafeez to Misbah at square-leg. The old fox was not going to miss a second opportunity: bang went the throw to Kamran s gloves, and off went the bails: White was run out.

Afridi, Hafeez, and Rehman rushed through the overs, but they needed a breakthrough, for they knew both Clarke and Michael Hussey were capable of putting up that one quick, big stand that may separate the teams at the end. Then, with the score reading 134 for 4 in 34 overs, Afridi introduced his old comrade Razzaq.

Razzaq s reputation lay in fooling batsmen with deft changes of pace and movement, foxing bowlers by shifting from first to fifth gear and back, and confusing statisticians by oscillating between Abdur and Abdul. He had been there, and had done it all; his best days were certainly past him, but he still had in it him for short spells.

The first two balls kept slow and low. Clarke drove the third ball ferociously but it hit the stumps at the other end. The fourth ball was a slow one: Clarke tried to pull, but the ball never seemed to arrive; when it did, it ran through Clarke and kissed the off-bail. 134 for 5.

Hussey was caught at mid-wicket off Rehman shortly afterwards before Razzaq made one nip off the seam, probably with some clever, deceptive wristwork; the ball came quicker lifted a bit more than the batsman had expected, took his edge, and Kamran ended up having a third catch.

Perhaps confused by his achievement, Kamran failed to stump Jason Krejza off Rehman, but once Gul was back nothing mattered. Steven Smith was bowled by a googly from Afridi, and Gul mopped up the tail to skittle Australia for 176.

The bowlers had done the first part of their job. Could the batsmen finish things off? It seemed almost inconceivable that Australia could lose a World Cup match. They were, after all, unbeaten for almost 12 years but then, they were the ones who had done it the last time

Binga comes to the party

The three Pakistani spinners had conceded a mere 94 from 29 overs between them. All Australia had in their line-up was Krejza. Lee, though not a spent force, was not what he was even five years earlier; Johnson was yet to become the ogre of 2013-14; Shaun Tait was erratic, but a match-winner on his day; Watson was canny, but was the attack enough?

Hafeez and Kamran went after the bowlers. Both his fours before Lee struck: a short-pitched ball hurried on to Hafeez, who attempted a pull; the ball bounced higher than what Hafeez had anticipated, and Lee ran in to take the catch himself.

The dismissal probably pushed Lee to put in that extra yard. Kamran was struck on the pads, Ponting reviewed, but the appeal was turned down. Kamran broke into an array of fours in response before Lee hits pads again: once again it was turned down, but this time the review worked. Kamran s 27-ball 23 with 5 fours came to an end. Lee, breathing fire, had 2 for 16, and had brought Australia back into the match.

Ponting knew he had to go with his pacers. He rotated Lee, Tait, and Johnson around, using Watson as a stock bowler. A dynamic Asad Shafiq and the experience Younis Khan resisted the fast bowlers. By this time it was evident that the pitch was dual-paced, but the men battled on, taking time, playing every ball as late as possible.

Pakistan reached 96 for 2 in 22 overs. Ponting brought back Lee. Something needed to happen for Australia. Younis played the first ball to third-man and ran a single. Shafiq gave the strike back two balls later. They needed another 79.

Lee ran in, the famous spring in his stride still evident: the ball was hurled at usual pace, and Younis, tentative for once, edged it to Haddin. The second ball was beautifully pitched, on the corridor of uncertainty; Misbah played a lazy shot, and Haddin threw the ball in the air in jubilation. They still required 79.

A 20-year old Umar Akmal walked out. There were two options to play Lee out or to attack him. His intentions soon became clear: Lee pitched outside off, Umar went down on one knee, and smashed Lee through cover for four.

Thereafter there was no stopping him: Johnson strayed, and Umar slammed him through cover; when Johnson bowled a length, Umar slogged him over deep mid-wicket with a brutal swipe; Ponting recalled Krejza, and Umar stepped out to dispatch him over long-on. Pakistan needed another 40: they were cantering.

But as it always happens with Australia, someone resists: Johnson bowled a lifter, the ball took the resilient Shafiq s glove, and flew to Watson at slip; Haddin dived in front of Watson, but the big man remained unperturbed.

Afridi walked out, steered Krejza for a single, but Johnson overthrew: they got a second run. He hit the next ball straight to Lee at long-on. Pakistan still needed 35. Could they hold on ?

Once again, that man

Pakistan had Wahab, Gul, and Rehman in the dressing-room. All of them could bat, but were certainly not all-rounders. Razzaq, on the other hand, was. Which of his two avatars would he assume? Would he stonewall and wait for Umar to finish things off, or would he combat fire with fire?

Umar, meanwhile, cut Krejza against the turn for four, but then the pair resorted to singles. The old feet matched the young as they stole ones and twos with ease, inching closer to that magical 177-mark. The bands at Premadasa went on incessantly as the Men in Green waited for that coveted moment in the pavilion.

Then, with seven to score off 56 balls, Razzaq pulled and cover-drove Krejza for consecutive fours, and contrary to all expectations, shook hands with the opposition, and walked off with the air of a man who just had another day at work.

Australia s 34-match unbeaten streak had come to an end.

– Australia lost the next match the quarter-final at Motera and crashed out of the tournament. It was the first time since 1992 that they could not make it to the final, let alone semi-final.

– Pakistan did not include Shoaib for the semi-final against India at Mohali, and were knocked out as well. India lifted their second World Cup, beating Sri Lanka in the final at Wankhede.

Man of the Match: Umar Akmal. 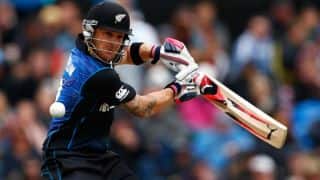