Continuing with our series of World Cup stats, we present the highest wicket-taker across all seasons of the ICC Cricket World Cup.

Continuing with our series of World Cup stats, we present the highest wicket-taker across all seasons of the ICC Cricket World Cup.

Former Australia left-arm pacer Gary Gilmour had an outstanding first World Cup, where despite playing just two matches, he picked up 11 wickets. A career which spanned just four years and featured just five one-day international matches, Gilmour produced 6 for 14 against England and 5 for 48 against West Indies at an average of 5.63 and a measly economy of 2.58.

England’s Mike Hendrick’s best bowling figures were achieved against Pakistan at Leeds, where he finished with 4 for 15. Hendrick did not remain a one-match wonder as he claimed 3 for 55 against New Zealand and another 2 for 50 against the eventual winners West Indies. Against Canada in Manchester, Hendrick gave away just five runs from eight overs and was rewarded with a wicket.

Roger Binny was emerged as the leading wicket-taker of this edition and his performance was a crucial behind India winning the World up. Binny played eight matches during India’s road to World Cup glory, with his best performance coming against Australia where he finished with 4 for 29 in the quarter-final. In addition to that, Binny also claimed a couple of three-wicket-hauls both times against the then-mighty West Indies. In the final, he bowled 10 overs to give just 23 runs and a wicket. His average was a stunning 18.66 and an economy of just 3.81.

Like Binny, Craig McDermott had a vital hand in leading Australia to their maiden World Cup triumph. He began the series with 4 for 56 against home team India as Australia clinched a narrow one-run win. He took another 3/61 against India but this time Australia lose to Mohammad Azharuddin’s all-round heroics. His five-wicket haul against Pakistan in the semi-final fetched McDermott the Man of the Match as Australia reached the final for the second time.

The 1992 World Cup was when Wasim Akram truly came to the notice of world cricket. Akram began with 3/21 against Zimbabwe as Pakistan beat them comprehensively by 52 runs and continued his fine form throughout the tournament. Akram’s miserly 3/28 against Australia at Perth helped Pakistan get the better of the reigning world champions, before he took his performance up a notch against New Zealand, claiming 3/32. The best of Akram was reserved for the final, where he bowled an over considered by many the over which changed Pakistan cricket forever. He snared Alam Lamb and Chris Lewis back to back deliveries, easily the two best deliveries of the tournament which shot Akram to instant limelight. Akram finished with the Man-of-the Man award as Pakistan lifted the World Cup.

With the World Cup coming to the sub-continent for the second time across two editions, legspinner Anil Kumble made the most of the opportunity. Kumble began with a couple of three-wicket-hauls as India registered a comfortable wins against Kenya and West Indies. Another three-for followed against Pakistan, allowing India to beat their arch-rivals second time in a row. Overall, Kumble’s economy rate was on the lower side 4.03 with an average of 18.73.

For the first time, in 1999, two bowlers shared the maximum wickets in a World Cup with Australia legspinner Shane Warne and New Zealand left-arm pacer Geoff Allott. Allott however played a game less than Warne since New Zealand lost in the first semi-final but not before the left-armer had bagged a couple of four-wicket-hauls against Australia and Pakistan, to go figures of 3/30 against Bangladesh, 3/15 against Scotland and another 3/24 against Zimbabwe. Warne, on the other hand, had claimed 3/39 against Scotland and 3/11 against the West Indies before going on a rampage in the semifinal and final, taking 4/29 against South Africa and 4/33 against Pakistan to help Australia lift the cup.

Chaminda Vaas had a phenomenal 2003 World Cup claiming 23 wickets at an average of 14.39 and a miserly economy of 3.76. Vaas produced his best performance against Bangladesh, skittling them for 124 with outstanding figures of 6/25. He was brilliant against minnows Kenya and Canada, claiming 3/41 and 3/15 against them to go with 4/22 against West Indies. In Sri Lanka’s final game of the event, Vaas finished with 3/34 even though they were knocked out in the semifinal by Australia

Glenn McGrath holds the record for the most wickets in a single edition of the World Cup. In his last international tournament, McGrath signed off with a performance to remember. His 26 wickets came at an average of 13.73, economy of 4.41 and a strike rate of 18.6. Six times did he emerge with a three-wicket-haul, his 3/18 against South Africa in the semi-final being the best against a Test-playing nation.

Zaheer topped his 18 wickets in the 2003 World Cup, by finishing with 21 scalps eight years later as India won the World Cup after 28 years. Zaheer claimed three-wicket-hauls four times at an average of 18.76 and economy of 4.83. His 3/64 against England helped India escape with a tie after his two-wicket burst got rid of centurion Andrew Strauss, half-centurion Ian Bell and Paul Collingwood. Tying Zaheer was Shahid Afridi, who claimed two five-wicket-hauls against Kenya and Canada to go with a couple of four-fors against Sri Lanka and West Indies.

The two left-arm pacers rattled oppositions during their respective roads to the final. Boult took 5/24 against Australia in the league game as New Zealand beat them by one wicket. He then went on to claim 3/34 against Afghanistan and 4/44 against West Indies. Starc, on the other hand was fiery and quick and matched Boult’s performance with 6/28 of his own in the same match. He had 4/14 against Scotland before saving his best for the final two matches. Against India in the semifinal, Starc picked up 2/28 against India, who were chasing 329 to win and in the final choked New Zealand with 2/20 from eight overs, restricting New Zealand to 183. 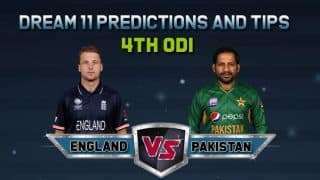 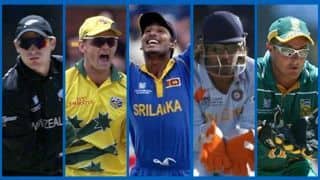 Cricket World Cup 2019: Most dismissals by a wicket-keeper in the World Cup